I’m about to do something I’ve never, ever done before—and so is Women’s Running. 🙂

Our March/April issue hits newsstands next week. Normally, we don’t release content before the magazine’s in stores, but what the heck? It’s Friday!  I won’t tell if you don’t. . . .

This month, we’re revealing a totally new look and a special cover featuring an incredibly inspiring woman. Wondering who’s on the cover? Here are some clues: she is a mom, model, marathon runner and (most importantly) an activist who works tirelessly to make the world a better place for women everywhere.

Can you guess who it is?

Following a dangerous birth during which she experienced hemorrhaging, Christy created Every Mother Counts (EMC). This charity supports maternal health around the world. Consider these unnerving statistics: A woman dies every 90 seconds due to complications from pregnancy. Of the 350,000 yearly deaths, 90 percent are preventable. Learn what you can do to make a difference at everymothercounts.org. 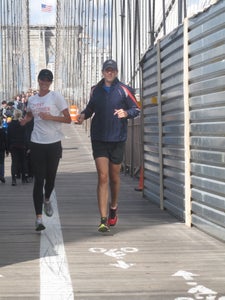 Christy wrote, directed and financed “No Woman, No Cry,” a documentary that showcases the plight of pregnant women in four countries. I can’t tell you how moving this film is. See for yourself by picking up your copy at everymothercounts.org/film.

Check out some behind-the-scene pictures from Women’s Running’s cover shoot. . .

I’m curious. . .who would you want to see next on Women’s Running Magazine’s cover?