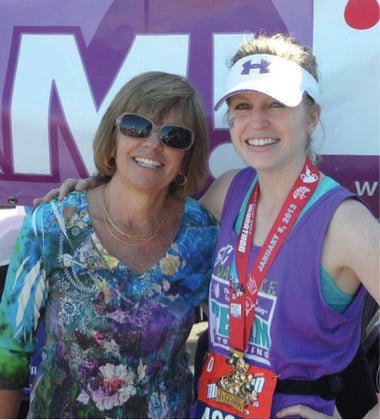 If you’re reading this, you’re most likely a runner. And if you’re a runner, you probably know other runners, which means you probably know someone who is training to race on behalf of a charity. You know this because your social media feeds are dotted with links to donation websites, your mailbox receives mass-mailed notes imploring you to give and you occasionally receive that not-so-subtle text from your friend asking if you’ve had a chance to donate yet. There was a time when I was a bit annoyed by those do-gooders; then I became one.

I wish I could say that my motivation to run for the Leukemia and Lymphoma Society as part of Team in Training was purely altruistic, but that would be a lie. Blood cancers had not touched my life personally. Other forms of cancer had, and I liked that the program would make a difference. But the true impetus was this: I’d get a free training plan, meet a whole bunch of new friends and take an awesome trip to run a distance race. Sign me up!

“Just raise $5,000. It’s easy!” they promised. “It will be fun!” they said. Well, I can tell you right now there is nothing easy about raising $5,000, although training for a race with a charity is fun. The team’s three-times-a-week training runs lasted from the frigid mornings of winter to the hot early summer afternoons, and complete strangers turned into family. Although I felt awkward for promoting my fundraising at first, it wasn’t long before the donations began to pour in, and I realized how many people blood cancer has affected.

RELATED: How Do I Raise Money For Charity While Also Training For A Race?

Many of us race for charity to meet people, try something new or get a bib for a coveted marathon. It can be easy to forget that in doing so, we’re gaining so much more than a race entry. We tend to separate ourselves from problems, diseases and hardships that don’t impact us personally—who needs more stress, right? After all, it can be challenging to relate to something you’ve never experienced.

While I knew that blood cancers were an important cause and I learned a lot about leukemia and lymphoma during my training, it didn’t really hit me until I met patients and started receiving messages from people I had lost touch with years ago. High school friends I had not seen in more than a decade contacted me to thank me for raising money because their grandmother or cousin or aunt had died from blood cancer. I heard from people who were actively fighting the disease, those who were in remission and surviving friends and family members.

Suddenly my mission took on a whole new meaning. While I may not have started my training fueled by benevolent passion, it’s definitely what helped me cross the finish line. As we say at TNT, “You think running a marathon is hard? Try chemotherapy!” Ahh, perspective.

A Few More Reasons To Run For Charity:
1. You’ll get extra cheers on race day thanks to your team singlet.

2. Team coaches often supply water and Gatorade during long runs for those of us (ahem) too lazy to carry our own.

3. You’ll learn a lot of new things about a cause and be able to educate others on why it is important.

4. You’ll make the world a better place to live—and run.