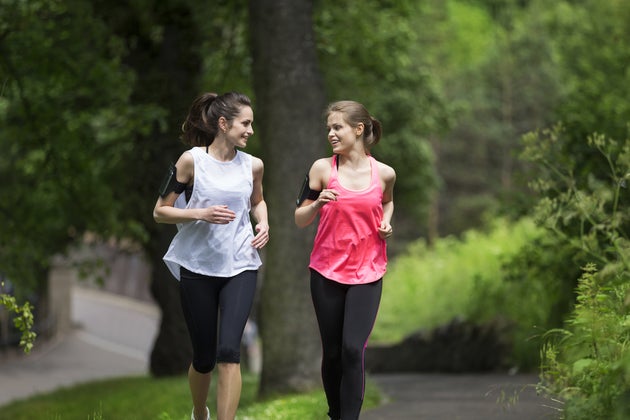 As a female runner, it is liberating to see the strides running has made toward becoming more “our” sport. Although running has no age or gender restrictions, it has truly developed into a woman’s sport over the past 40 years. In the book Olympic Marathon: A Centennial Of The Games Most Storied Race by Charlie Lovett, he reveals the struggle that women encountered when they were unable to participate in the Olympic Marathon. Running was thought of as strictly a “men’s sport”; males dominated races, pushing females aside. It was valiant women, like Stamatis Rovithi, Melpomene, Violet Piercy, Roberta “Bobbi” Gibb and Kathrine Switzer, who got running recognized as not just a male sport, but also a female one.

It wasn’t until 1972 that women were allowed to officially compete in the Boston Marathon, proving that there was a growing number of women who had the hunger to run. Looking at recent statistics, I marvel at the way we have taken over the running world. According to Running USA, the 2013 Road Race Demographics shows that 58 percent of 5K finishers were female. In addition, women made up 57 percent of 10K finishers, as well as 61 percent of half-marathon finishers.

As for the Women’s National Runner Survey, 14,000 female runners responded saying they were “core runners”—active participants who tend to enter running events and train year-round. Today there are a number of “women-only” races across the U.S., such as the Run Disney Princess Half and Tinker Bell Half; Divas Half Marathon and 5K Series; NYRR Mini 5K; Queen Bee Half Marathon; See Jane Run Half Marathon; SoCal Wine Country Women’s Half and 5K; and the Thelma and Louise Half Marathon. Additionally women-led running brands like Oiselle and Lorna Jane embrace the power and beauty of women as runners, athletes and people.

As a female runner, I appreciate that one of the great perks of this sport is the availability and access we have to most elites. It’s not unusual for the average high-school runner to be at an elite meet and just steps away from the fastest runners in the sport. That’s so empowering! For many of us, it’s not always on our radar to attend these meets to watch a great race (or races); however, they are a great way to support the athletes who run to make their living. Marathons, half marathons and 5Ks have also become more widespread events with a tremendous—and growing—field of talent.

“Running simply makes me feel accomplished, strong, and with each run I do, I show myself just how tough I can be and how your body can do anything as long as you have the power to overcome your mind saying you can’t,” says Molly Leidig, a former collegiate runner who is now a marathoner. “Female runners are tough. And I’m proud to be one.”

Ashley Cambisaca, collegiate runner at Fairfield University, added, “I think running makes a woman feel powerful and strong. In a society where women often feel powerless and weak, it’s important to run. It shows women their strength and limits, and they fall in love with it because it gives them a sense of accomplishment.”

Running can be a breath of fresh air in a world where most mainstream sports are still dominated by men in both their players and audience—like football. According to a recent Adweek/Harris Poll, two-thirds of U.S. adults watch the NFL, 73 percent of which are men. Baseball and basketball look similar to those statistics.

“Men always seem to get the reputation of being the stronger and tougher sex. However, I beg to differ. Today, running is a primarily a female-dominated sport and this shows the toughness and strength of the female population,” says Leidig.