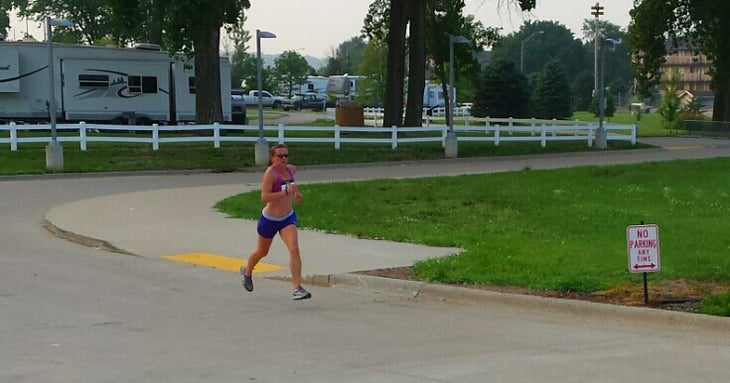 I started running in grade school. You know, sprinting up and down the gym floor for basketball practice and trying to obtain the mile run time necessary for the Presidential Physical Fitness Award in PE. In fifth grade I was determined to reach this Presidential goal. So I did what any reasonable 10-year-old would do: I decided to go out and run a mile as fast as I possibly could as often as I could to train.

I think I did that twice. In black high-topped basketball shoes, I’m certain, before wondering how anyone could ever run more than a mile. I can still feel the fading afternoon sun and the heaviness of legs and heart, of that moment.

Fast forward four years, and I decided to give running a true attempt by joining the track team at my small-town Minnesota high school. Being scared of the hurdles and going off of a decent finish in the timed mile run for volleyball practice, I decided to give the middle-distance events my focus. Since most of the team stuck with the “safer” sprint distances, I thought that this gave me a better chance at success, as well. I LOVED the 800-meter run and competed in the 4×400 and mile races as well, going on to run track and cross country throughout high school and at Northwestern College in Orange City, IA. I was never a stand-out but was steadily competitive.

My first marathon was the 2000 NAIA Outdoor Track Nationals my freshman year of college, and I took on the challenge to train for the Nationals marathon again in 2001. Pushing knee pain to the point of involuntary cessation of a long run was not a wise move. After a summer of no running (and no Spring marathon) and enduring deep tissue massage to break up scar tissue in the tendons surrounding my knee joints, I was able to continue running. Extremely tight low back muscles were my “normal” after tackling the long runs for marathon training during this period of my life, as well.

I bring up this history and the (major) injuries I suffered because throughout this time, I was a heel striker.

In 2008, just after my first baby turned one, I ran the Twin Cities Marathon—my fourth 26.2. I hear it’s a beautiful course, but my view was shrouded by heavy sheets of rain for most of the first half, and staring at the ground to avoid the biggest puddles was my view during any let-up of the downpour. By mile 15, I knew that I would not be able to hold out for my goal time, but I fought to stay with my pace group, nonetheless. At one point, my pace group leader glanced over at my eager-yet-struggling self and said, “Don’t over-stride.”

After finishing that race 18 minutes shy of my trained-for goal, my curiosity was piqued about running form and how I was possibly doing it wrong, unaware. Internet research awakened me to take note of HOW I ran, not just THAT I ran, and I began to count my footfalls per minute as well, aiming for the advised 180 (90 per foot). A timely article in Women’s Running—“Perfecting Your Form”—further informed my transition from a “runner” into an “aware runner.” To quote Thomas Miller, Ph.D., author of Programmed To Run: “There is no debate whether heel or mid-foot initial contact is more efficient. I have never observed a world-class distance runner sustain a heel foot strike for more than a stride or so, and that is usually at the start of a downhill.”

Changing my form together with joining the barefoot running craze of five to six years ago led to surprisingly sore calves as my muscles began to take the brunt of the force rather than my knees and back. I also noticed an increase in challenge to my quadriceps (MY LEGS HURT. And in different areas than I was used to.). But I believed in the concept that a forefoot strike reduces joint impact compared with a heel strike and so stuck with my focus on changing everything I thought I knew inherently about running.

This dedicated process of shifting the way I run has paid off in fewer aches and pains as well as faster times. Although a need for stability brought me out of minimalist shoes and back into my beloved Kayanos, I continue to run with a slight forward lean (from the ankle, not waist) and a forefoot strike, a combination that I credit with allowing me to take 5 minutes off of my twice-run marathon PR, with similar training and race-day conditions. I am also able to forego the regular chiropractic appointments that had been obligatory after my long runs while heel striking, and the knee pain that plagued my attempt at a second college marathon, has not resurfaced.

Since running a new personal best of 3:22 at the 2010 Grandma’s Marathon in Duluth, Minn., the demands of life with four kids and a busy husband have kept me to racing only 5K through half-marathon distances. I have continued to train hard—yet not as long—and I credit my change in running form with making me a more efficient runner while keeping me free from the injuries I’d suffered in the past when striking the ground heel first with every footfall, for the roughly 2,000 steps per mile. With approximately 40,000 steps constituting your 20-mile run, paying attention to the impact of biomechanics on your joint health certainly seems like an important step to take! Unfortunately, it was a lesson that I had to learn the hard way. I leave you with one final thought about running and life from Maria Robinson: “Nobody can go back and start a new beginning, but anyone can start today and make a new ending.”