There are six marathons that just about every single marathoner around the world aspires to run, the World Marathon Majors: Boston, Berlin, Chicago, London, New York and Tokyo. Having the opportunity to run any of the World Marathon Majors is a once in a lifetime experience and runners from all over the world spend years trying to get in via ballot or qualifying times. I had the pleasure of running the 2015 Berlin Marathon with Adidas miCoach and it was, without a doubt, one of the most rewarding and epic marathons I have ever run! This is what you can expect when you run the Berlin Marathon.

When else do you get to pick up your race bib at a historic site? The Berlin Vital pre-­race expo is held at the the former Berlin Tempelhof Airport, which is loaded with history! I went during peak hours (Saturday at noon) and spent the entire two hours at the expo squealing with glee while simultaneously driving everyone in my party insane by asking, “What’s that!?!?” and “CAN YOU BELIEVE WE’RE RUNNING THE BERLIN MARATHON!?!?”. I spent ages wandering the different booths checking out the different running products from all around the country.

One of the most exciting aspects of being at the Berlin Marathon is the possibility of a world record! In 2014 Dennis Kimetto broke the World Record and when I got to sit down with two of the fastest (and kindest) marathon runners in the world, Emmanuel Mutai and Geoffrey Mutai, they both had their eyes on a world record!

The Berlin Marathon is the second largest marathon in the world and at times can be totally overwhelming! You’re surrounded by thousands of runners speaking dozens of languages everywhere you go. 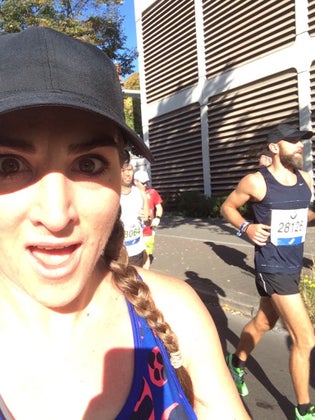 Sunny with a chance of perfection. That is what you can expect from the weather when you run the Berlin Marathon! If you’re looking for a cool but sunny marathon, Berlin is for you. 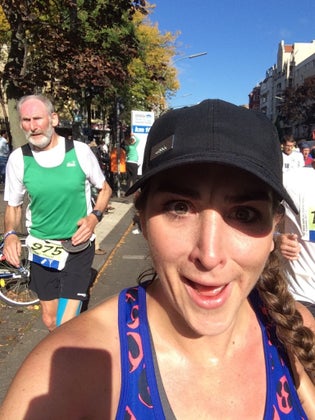 When you’re running Berlin the signs are in kilometers instead of miles! It’s really important that you take some time to convert four to six points ahead of time so you don’t meltdown when you try to do math at mile 24 (not that I did this…okay fine I totally fell apart when I couldn’t figure out where I was!). I was about a mile from the finish when a spectator yelled, “Only 2 more miles” and I thought I was going to have a panic attack. 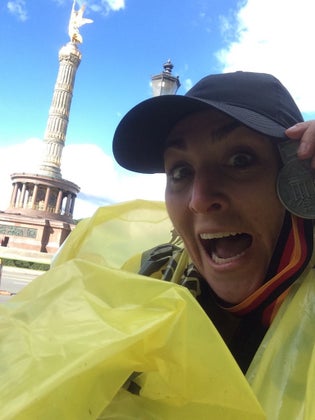 I feel like I spent the entire race looking around going, “WOW, LOOK AT THAT!”. Everywhere you go the architecture is incredible.

7. A Different Kind of Spectator!

When I saw a sign in English that made me laugh, I knew I had found my sister because her’s was one of three race day signs I saw along the course! I live for a hilarious race day sign and even though I knew I wasn’t going to be able to read the funny signs, I didn’t anticipate that I’d only see a handful! It’s pretty wild to hear spectators cheer for you in different languages. Expect tons of live bands along the course and loads of race day spectator support.

Berlin is one of the flattest courses in the world so expect to run ridiculously fast! I didn’t intend to run as fast as I did and I ended up running a personal best of 4:03:12, shaving almost nine minutes off my previous marathon time! 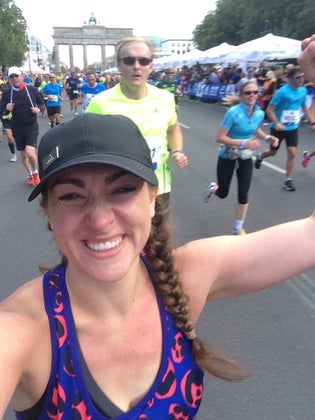 My favorite part about the Berlin Marathon was the final two kilometers. Once you turn the final corner, it’s a straight shot through the Brandenburg Gate and over the finish line. The final kilometer of the Berlin Marathon is surreal! If you’re looking for an international marathon to run, the Berlin Marathon is a must! From incredible sights along the way to infectious energy along the speedy course, it was incredible from start to finish! My goal is always to finish a marathon with a smile on my face and even though I bonked out around mile 24, once I saw that finish line, everything was right again. I instantly forgot about the pain and was hit by a tidal wave of pride and accomplishment.

Expect a once in a lifetime experience when you run the Berlin Marathon. Until next time, #RunSelfieRepeat.