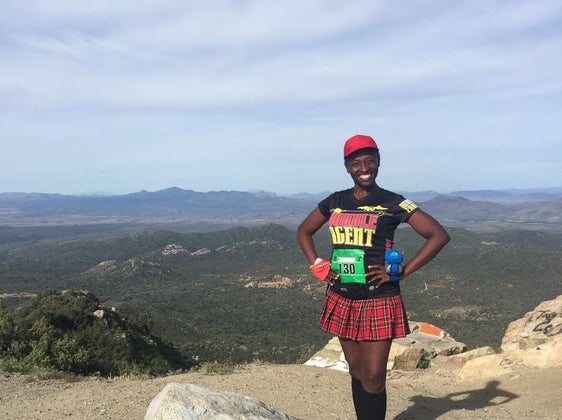 I am continually amazed by the incredible things that women do a daily basis:

Some of us work outside of the home. Some of us raise families as our life’s work. Some of us do both among OTHER things…

…other things like run a marathon and/or half marathon almost EVERY SINGLE WEEKEND in addition to being in the armed forces.

Meet Jamila Williams, an operations and systems analyst in the the United States Army.

I encountered this phenomenal woman back in November at the Helen Holiday Half at Unicoi State Park in the North Georgia Mountains. It would be Jamila’s umpteenth half in her quest to do 100 half marathons. At the time of our interview, she was on number 92, very close to her goal.

A few years ago, Williams was having some trouble with the Army’s weight standards and timed run and so began running regularly to achieve both goals. One of her military colleagues volunteered to help, and thus began her love affair with running. She signed up for a few 5Ks and then became addicted, like many of us eventually do, traveling for hours to get to both 5K and 10K races. What she liked most about doing races was being able to push herself, becoming fitter while having fun in a social atmosphere, and experiencing new places.

Of course, and as is completely natural, she started dabbling in half marathons and the rest is history.

If there is a marathon happening, you can bet that Jamila will be present. If there is a half marathon on the same weekend, she will also be there. The following weekend you might find her at a 100-miler, like say, the Nanny Goat 100 Mile Race, which she just completed a few weekends ago.

If you were wondering why a fairly sane person would do this, ask yourself this: Why do any of us do what we do? 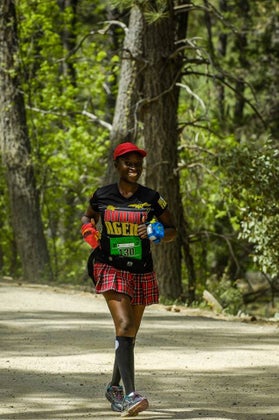 Jamila has such an infectious love for the sport that she has a goal of running the 50 states, doing 100 marathons and 100 half marathons. She is a proud member of the Marathon Maniacs and Half Maniacs, and will eventually have run throughout every state in the US.

We can all learn a lesson from this vivacious member of our armed forces. Have a goal. Attack it. Learn. Grow.

Do you have a BIG HONKING GOAL? What is it and how will you make it happen? Tweet @TheMirnavator and @WomensRunning and let us know!