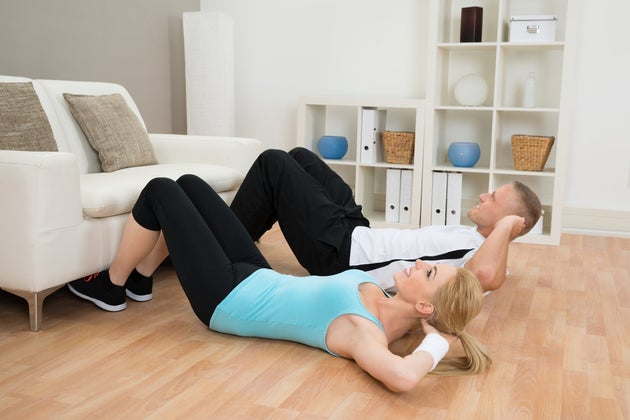 While you sit and watch the game—munching on chips, wings and cookies—think about this: The average person consumes 2,400 calories and 121 grams of fat during the Super Bowl. That’s more than what you’re supposed to have in an entire day!

The average NFL game has 20 commercial breaks—that’s 100 ads, according to marketwatch.com. That means you have plenty of time to stand up and burn some calories. In fact, out of the 4-hour spectacle, there’s about an hour commercial time and close to 13 minutes of a halftime show. That’s plenty of time to entertain your sweat.

Kaylin Richardson, two-time Olympian/Big Mountain Skier and PEAR coach, suggests you and your friends get off the couch and onto your feet during the commercial breaks. Take Richardson’s Super Bowl challenge and get everyone to involved in the action.

From the beginning of the coin toss ceremony, with a friend, start doing crunches (or situps if you’re feeling bold), alternating which one of you is up and which one is down. Keep going until the ref calls “heads” or “tails.” If it’s “heads” whoever is on the up side of the crunch wins; if it’s “tails” whoever is on the downside (with their back on the floor) wins.

Whenever there is a touchdown everyone in the room has to get up and do 20 reps of high knees, followed by 10 push-ups, and finish with an original touchdown dance of their own. The stargazer, moonwalk and twinkle toes are all acceptable, but points for originality are key—and heckling is highly encouraged.

Every time the play-by-play or color analyst says “super” everyone in the room has to stand up and perform one squat. The key is to listen. The last one to get up, must then do a set of 10 body squats while everyone watches and, inevitably, laughs at them. If “super” isn’t prolific enough of a word throughout the game, feel free to switch it up. Have the “loser” choose the new word after they complete their 10 squats.