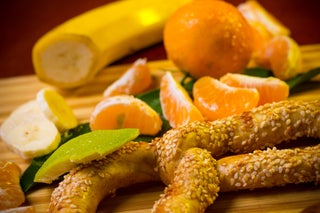 Trail runners and nutrition savants Magdalena Boulet and Stephanie Howe have a range of foods and drinks they’ve seen while racing. More than anything else, the two speedsters stress the importance of training with the foods you might eat on race day. “The worst thing that people can do is try it without testing because they heard it works,” says Boulet.

What treats can you expect to see served up at the aid-station buffet? We have a list of some of the usual suspects that you can practice with.

Pretzels are simple to digest, so you’re getting fast carbs and salt. Boulet cautions against chips because they are high in fat, while Howe says sometimes they might work for your body. She believes that if you’re craving crisps, your body is telling you it needs them.

Howe, who sipped on Sprite and ginger ale for much of Western States 100, says prepoured cups tend to have lost most of their fizz, which is a good thing. The simple sugars are easy to digest, and if your stomach can handle it, a little caffeine (Coke or Pepsi) might help you too.

Howe is a fan of Peanut M&M’s: “You can pop a couple in your mouth and they taste good. The peanuts are a little salty,” she says. “A little crunch can do wonders for your mind.” Careful of too many gummy bears or Skittles, but a few can provide some concentrated simple sugar. Turn to ginger candies for an upset stomach.

These are a great mix of simple and complex carbs. Pro tips: Go light on the PB, and white bread is the best for easy digestion. Howe says she’ll take the crust off if she eats one to lessen the fiber impact.

These are easy to digest and give your mouth a break from sweet chews, gels and other race nutrition. They’re a good portal for sodium, so go ahead and dip them in salt. Howe suggests taking one to go in a drink cup!

Not only are these important for hydration, but they are crucial for cooling the body on steamy days. Stuff a few cubes in your sports bra or underneath your hat. Filling a water bottle with ice can also make for longer-lasting cold water on that next ascent.

Related: Why You Should Use Water Stops On Race Day

A bar may be a better option, since Oreos or vanilla cookies tend to have less moisture, which can lead to digestive distress. They aren’t really the best fuel for performance, but they are relatively simple and sweet.

Watermelon is high in water and low in fiber, which makes it a good choice. Be leery of other fruits that are much higher in fiber (oranges and bananas) or more acidic (apples).

Not only is this great for hydration and salt replenishment, but it can warm you up when temperatures dip and bring you back to life if you’re running after dark.

Now’s the Time to Give Trail Running a Try

4 Reasons to Eat an Avocado a Day

6 Easy Recipes That Will Help Heal Your Gut