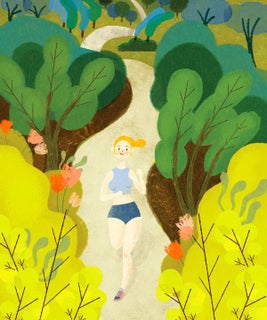 My friend’s heels flicked up and down like little wings as he ascended a series of switchbacks in our nearby national forest. “Come on!” he yelled. “You’ve got this!”

My feet clomped along like a (slowly) stampeding elephant as I lumbered my way up the trail, eyes glued to the forest floor. One wrong step and I would surely stumble dramatically over the cliffs and onto the ground far below! Well, sort of. I live in South Carolina, so there weren’t any cliffs per se. There was no ground any farther below than my feet, but you could have fooled me. My entire running career has been on the roads, and to this point, I had never run on a trail before.

When my friend invited me out to run with him, the idea seemed sort of tranquil. I’ll get back to nature, I thought. This will be the ultimate way to reduce stress! Although the trails themselves were peaceful, my mind was not. I’ve broken 12 bones (you read that correctly) so my every thought was focused on simply not falling. At the end of our 6-mile route, I was exhausted. I felt like I had run 20 miles on the road, even though we had only run for about an hour on what is allegedly a “more forgiving” surface. No, trails didn’t seem to have that calming effect for me. I wasn’t one with nature; I was one against nature!

My running buddy assured me that running on the trails would become easier. I wouldn’t have to look down quite so much, and I definitely wouldn’t fall as often—at least, that was the promise. While I can’t say that trail running requires any less of my concentration now than it did on that first day, I can confirm that I have found the peace that comes from off-road running.

You see, most people find the trails calming because there are no distractions from the outside world. If you pick the right trail, it can feel like you’re the only person on the planet. But for me, it’s more than that. In the woods, my stress melts away because I’m so focused on the next step (and not falling) that I don’t have the capacity to think about anything else.

I like to say that I’ve solved some of my biggest problems while out running on the roads, where my steps lull me into a trance and I can let my mind wander. The clarity I’ve received while being buried in thought on a 15-miler is unparalleled.

But trail running brings me peace in a different way. I’m so mentally and physically drained at the end that all of my day-to-day problems have been wiped away; I have no energy left to worry about them. They say an elephant never forgets, but all this elephant needs is a few miles on the trails to see the world in a totally different light.