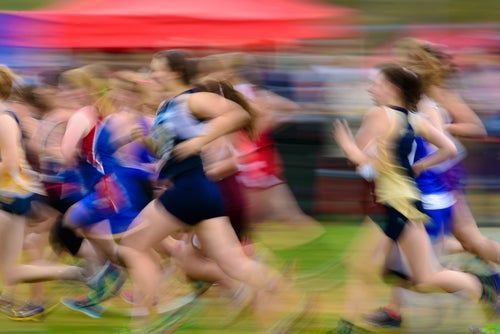 I can’t tell you how many times I’ve heard that. Or: “Oh, cross country! Is that on the track?” I might cringe at such a question, but because not everyone knows the sport, allow me to explain. Cross country involves racing anywhere between 2 and 6.2 miles, through fields, woods and the like. It seems pretty basic, but as I came to find out, there are a lot of oddities to the sport that no one really tells you until you’re in the thick of it. So in case you’re jumping in a community cross-country race or know someone who is, there are a few things you should know.

You’ll get a lot closer to your teammates.

The real magic of cross country is that of the starting box. Picture a towel-sized increment of grass. There’s no way 40 runners will fit in there! Ah, but in cross country they do! If there’s a separate varsity race, the box holds seven. But in an open race, the entire team must squeeze into the confines of those painted-barriers in the ground. Usually, the top-three runners stand at the front and the rest of the team stacks behind them in a gangly, nervous bunch. Get excited: You’re about to get closer to your teammates than ever before.

The first 200 meters will be chaos.

I can only hope that your first race will be on the smaller side. But at one point or another, you’ll experience a large race and you need to know what to expect. Similar to a road race, there will be a mad dash from the starting line. Just because two girls sprint out to the front doesn’t mean you should run up there with them. There are many runners who are new to pacing themselves and they will go out and continue hard, only to crash and burn a mile later. Be smart. To avoid getting swallowed up by the craziness, get out fast for the few bunch of meters, then settle in to your race pace. You’ll soon be passing those girls who went out too quickly.

You’ll want to pay attention when walking the course.

Whether you’re one of the fastest runners or one of the slowest, you need to know the general layout of the cross-country course. First of all, it will help with pacing. If you know where you are, you know where the hills will be or when to start your final kick to the finish line. You also want to know the course because there’s always a slim chance that you’ll get separated from the pack and need to know your way. You don’t want to run an extra half mile because you went the wrong way, and you certainly don’t want to get disqualified. Know where you’re going!

Runners are a unique breed. We can look at a giant tree and see the potential for a bathroom. It’s a special ability, and one you will definitely use at a cross-country meet. Ninety percent of the meets I’ve gone to don’t have enough bathrooms, which can be true for road races as well. Don’t let that throw you off your game. Ask around to see if there are other restrooms. If you can find a private spot, relieve yourself in the woods. Welcome to cross country.

Cross country is one of three sports I know of that equates low scores to winning. If you finish in 20th place, that’s 20 points for your team. Once the first five runners on your team finish, their place numbers are added up, and there’s your team score. So, if your top five runners were up at the front of the race, that’s a lower score, and that sets you up for a team victory!

That post-race cool-down is super important.

Chances are, you’ll be keeled over at the finish line when someone will whisper the dreaded words: “Be sure you cool down.” Going for a slow run sounds like the worst thing in the world when your legs feel like jelly, but trust me: They’ll feel a lot worse tomorrow if you don’t. It doesn’t have to be a fast run—and I can’t imagine it will be—but be sure to run a few miles so that you flush the lactic acid out of your legs.

There you have it. That’s what to expect from a cross country meet in a nutshell. I’m forever thankful that I get to run cross country. But you don’t have to be a student athlete to race cross country! I encourage you to take a look at your community race calendar. There are an increasing number of cross country races for the general public, that provide excellent opportunities to stay active and gain fitness. I hope to see you out there!