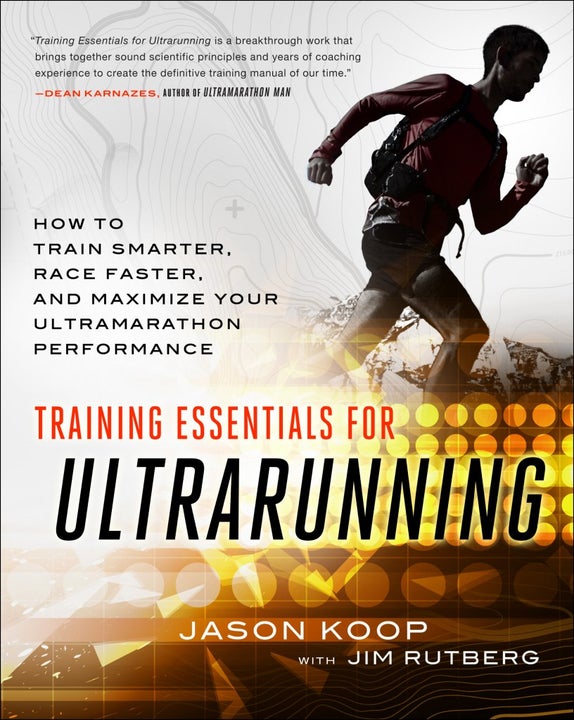 Adapted with permission of VeloPress from Training Essentials for Ultrarunning by Jason Koop, coach to elite ultramarathoners. In his book, Koop reveals his highly effective ultramarathon training methods for ultrarunners of all abilities.

The world of ultrarunning is changing. People are starting to pay far more attention to their training and are realizing that if they do the right things leading up to the event, they will give themselves the best chance at success. Still, there are many misconceptions and errors in current training methodologies for ultrarunners. Time and time again, I see ultrarunners making the same mistakes. They unnecessarily prioritize mileage over focused training. They train too slow. They do not train for the specific demands of a particular event. Correct training methodology not only fixes these problems but will also optimally prepare the athlete for success. Later in the book I will dive deep into the whys and hows of best training practices. For now, let’s take a 10,000-foot view of the top mistakes I see in training.

I have my share of personal ultramarathon experience. I have finished a lot of ultras and competed in some of the toughest races in the world. I’ve had both great days and very bad ones. I’ve DNFed when I shouldn’t have, and I’ve finished races when I should have dropped out. I’ve trained for speed, vertical, endurance, and every other aspect I preach to my athletes. And I’ve improved tremendously as an ultrarunner. Despite all this, I use very little of my personal experience when coaching an athlete. In research papers, the number of subjects in an experiment is referred to as the N, and the best studies benefit from a large N. I acutely realize that I am my own N of 1. If I ever use an “I” statement in my coaching, I consider it a flaw. A coach should certainly take his or her own experience into account. However, relying on that experience, the N of 1, is the ultimate coaching flaw. Yet it’s one I see over and over again. I have seen dozens of athletes fail to improve because they are relying on an N of 1 to guide them. Ultrarunning coaches routinely regurgitate their personal training for their athletes. And runners who coach themselves tend to insert too much of their own bias into the process. Others ask their peers what they have done, relying on small likelihood that the N of 1 will also work for them.

Related: A Coach Shares How To Find Your Best Race Mantra

MISTAKE 2: TOO MUCH FOCUS ON VOLUME

Ultramarathons are long, sometimes taking a day or even two to complete. Athletes often look at the prospect of locomoting for hours on end and feel overwhelmed, thinking, “If I’m going to be out there forever, I better run and hike in training as much as possible.” They make the classic sacrifice of substituting more volume in place of intensity. They train low and slow, and they do it all the time. While this type of training does produce limited benefits for the ultramarathon athlete, it carries significant risk, and the point of diminishing returns is reached quickly. Quite simply, you run more miles but don’t get enough out of them.

Athletes often think, “I’ll be running slowly during my race, so I don’t need to run fast during training.” This thinking is not entirely flawed. It’s not that you need to run spectacularly fast but rather that you need to focus on a range of different intensities. Developing specific parts of your physiology, through focused intensity during different parts of the year, produces a more fit and ready athlete, regardless of your background and goals. For those of you reading this book who do in fact incorporate some sort of intensity, I applaud you and encourage you to give yourself a pat on the back. However, even when athletes incorporate intensity, I have often found it to be sporadic and unsystematic. They do different intensities during the week (say, a speed session on Tuesday and a tempo run on Thursday) or not enough of the same intensity all at once. Yes, some intensity is better than none, but focused and concentrated intensity, applied systematically over a period of weeks, is the best way to become a complete athlete.

Related: Why You Should Add Long Slow Runs To Your Training

It’s easy to generalize that all ultramarathons are long and done at a low intensity. Although this is oftentimes the case, you can train and prepare for specific elements within individual races. How steep are the climbs? How hot is the race? How far apart are the aid stations? What is the terrain like? These are elements of specificity you can train for. For example, consider trail versus road. Athletes understand that if the goal event is on trail, they need to train predominantly on trail. Simple, right? Yet many athletes, even the best, make the mistake of changing their terrain specificity in the weeks leading up to a critical race. There is fantastic track in Chamonix, France, just next to the starting line of the Ultra-Trail du Mont-Blanc (UTMB). It’s a picturesque setting, with the stunning Alps framing the background. For some odd reason, when thousands of athletes descend upon Chamonix every August for the 100-mile UTMB and its companion races, many of them feel the need to do mile repeats and 5K time trials around the pristine, smooth track surface. The last time I checked, there’s not one speck of track surface on any of the trails around Chamonix. The concept of specificity extends beyond the surface under your feet. You can, and should, extend that concept to every aspect of the race. The degree to which you can apply specificity to training makes you better prepared for all the elements on race day, including the intensity, duration, environmental conditions, and whatever other troubles and tribulations you might encounter.

Jason Koop is the Director of Coaching for CTS, coach to elite ultrarunners, and an elite ultramarathoner. His new book Training Essentials for Ultrarunning reveals his highly effective ultramarathon training methods. The book is now available in bookstores, run shops, and online. Learn more at velopress.com/koop.