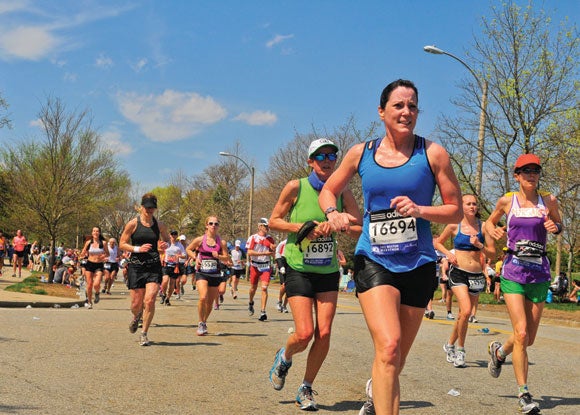 Boston Marathon runners are inside the four-week mark of race day, which means jitters, really long runs and final prep to make sure they are primed to run well on April 18. Greg McMillan, renowned running coach and exercise scientist, has coached many Boston qualifiers, including ones running Boston as their second marathon. He answers some of our questions leading up to the big day:

Women’s Running: For runners that are running Boston but maybe don’t have a ton of marathon experience, what advice specifically related to Boston’s course would you give to hopefully avoid a mid-race blowup?

Greg McMillan: Don’t bank time! The biggest race failure at Boston is running too fast in the early portion. (NOTE: The course is essentially downhill of the first 3.5 miles.) It’s hard to hold back and not run faster than goal pace in the first few miles but you must.

Related: Should You Be Doing Race Pace Long Runs?

WR: In the vital 4 weeks leading up to the race, what are some practices—physical or mental—that runners can do to be prepared totally for race day?

GM: First, become a great downhill runner. Lots and lots of running on hilly terrain, where you work on your downhill running technique, and strengthen the quads to prepare for Boston’s relentless downhills. Second, dial in your fueling. Find a routine that works for you and gives you lots of power and mental energy over the last few miles of long and tough runs. Improper fueling is one of the biggest mistakes runners make. Third, stay healthy! An extra recovery day never hurt anyone but running too soon, too hard on a slight injury is a great way to be the fittest spectator in Boston. (Ha!)

WR: What do you see as the biggest mistakes runners make when training for a marathon that causes issues on race day?

GM: They don’t run hard when fatigued, tired and mentally sapped. While we can’t exactly replicate the marathon in training, we can use workouts and fueling strategies to create situations where we have to endure suffering. This is critical in marathon preparation. If you are always fresh in training and never forced to run when tired, depleted or mentally drained, then you aren’t prepared for what will inevitably happen on race day.

WR: In your opinion, how much of the “bonk” is physical, and how much of it is mental? Or does it depend?

GM: They are tied together. The brain monitors the body just like the computer in your car monitors traction and stability in your car. If you run too fast in the marathon and are depleting the stored glycogen in your muscles too quickly, the brain is aware and begins to cut the power—”the bonk.” It’s a well-oiled machine so that you don’t hurt yourself. But for racing, we need to teach the body that these things aren’t “bonk-worthy,” so the training is designed to store glycogen, spare it at race pace and teach the body that lowering glycogen stores isn’t a threat. The combination means the brain stays happy and you have more fuel for the final part of the race. So it’s a complex interaction between the body and mind that creates or avoids the bonk.

Related: The Ugly Part Of Marathon Training No One Talks About

My recommendation is to focus on fuel sources that help sustain blood sugar levels instead of ones that will cause a spike and crash. Keeping blood sugar stable will also allow you to spare your precious glycogen (carbohydrate) stores for when you need them the most—at the end of a race. Fueling with slow-burning carbohydrates can help you avoid GI issues by keeping your blood sugar (energy) steady without needing to take in as many calories and refuel as frequently. I have run Boston once (3:07) and carried UCAN nutrition with me. I had zero fueling issues throughout the entire race.

Greg McMillan is a runner, exercise scientist and coach with the unique ability to combine the science of endurance performance with the art of real-world coaching. Greg has a masters degree in Exercise Physiology where his research focused on the determining factors of distance running performance. Throughout his coaching career, Greg has been successful at helping a wide range of athletes. He has coached Olympians, Boston Marathon qualifiers as well as new runners through charity marathon groups. The bulk of his athletes are everyday runners balancing work, family and other commitments with their running. He coaches runners through his website, mcmillanrunning.com