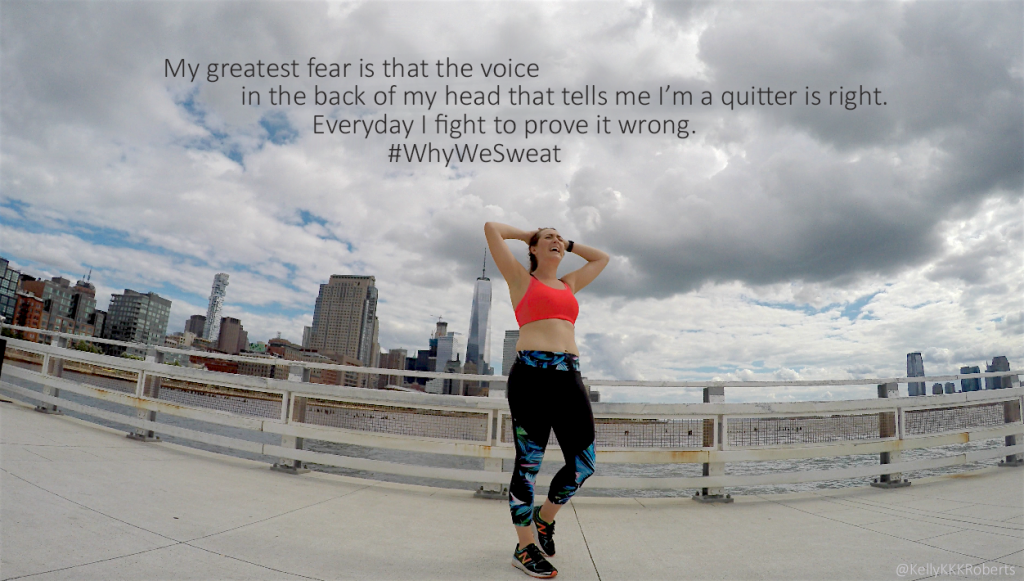 I’ll never forget my first few months as a new runner. They were painful, soul crushing, difficult, slow, and an all around mess. I was never athletic. I missed over 70 days of senior year PE because I hated running and being active. I’m not kidding when I say that I used to be President of the I Hate Running Club. But the day I started running, I was desperate to do something to move forward in a difficult time in my life and physically putting one foot in front of the other felt like a good place to start.

A few months ago, I was doubting myself more than usual. Pulling back and questioning myself where I would normally charge towards uncertain or intimidating opportunities in full gusto. I realized I had gotten comfortable and that sense of comfort was forcing me to doubt myself in the face of uncertainty. I decided I needed an impossible goal to remind myself that I’m stronger and capable than I give myself credit for; so I set the seemingly impossible goal to shave 27 minutes off of my marathon time in 6 months. I knew that training to qualify for Boston (BQ) was going to be really, really hard but surprisingly, the hardest part hasn’t been the running. The hardest part has been pushing past my own personal self defined limits.

Much of what I’m experiencing every day during this training cycle reminds me of my first few months as a new runner. Every step is painful, intimidating, and scary. Similarly to when I was just getting started, I often feel like I’m in over my head, waiting patiently for running to feel easier and doable. I remember the day I ran three miles without stopping for the first time, I was on cloud nine. Finally I felt like I was moving forward. Then, two days later, about a mile in, I had to stop to walk. It was a never ending cycle of two steps forward one hundred steps back but despite my frustrations, miraculously, I didn’t give up.

In my experience, the one thing that has stayed true is how difficult it is to push past my self imposed limits. From an intimidating pace, a feeling, a degree of discomfort, or even doubt, everyday I struggle to push past what I think I’m capable of. When I’m on the track and and see a pace on my Garmin that I don’t believe I’m capable of holding, I panic. When I’m running an easy recovery run and it feels exhausting and labored, I panic. When I’m running a threshold run and my incredible Gotham City Runners or November Project teammates start to pull away, I panic. I find myself in a constant state of “I can’t do this” when I know I should be saying, “Let’s see what happen”.

One of the reasons running resonated so deeply with me was that I can’t fake it. All my life I’ve  relied on charm, wit, and confidence to get me through difficult situations. I did only the things that came naturally to me, gave up if I didn’t think I could do something perfectly with ease, and I rarely pursued a challenge. But I’m not an innately good runner. It isn’t by any means easy and going out for a run humbles me and reminds me that through hard work, persistence, and perseverance, anything is possible. Running my first marathon was one of the most rewarding days of my life. For once, instead of taking the easy road, I took the impossible road, believed in myself, and because of my hard work, I was able to cross the finish line.

And that’s why I decided to start a daily vlog while I pursue my BQ attempt. It’s so easy to hide the embarrassing and less glamorous side of training for something that feels impossible. I can’t hide from a camera the way I construct my words. When I’m running hill repeats and I give up on myself, I don’t get to write about it, I have to show it to you. It’s not only a way to hold myself accountable but a way to show people who, like me, feel like running is impossible that it isn’t impossible, it’s just really hard. But the bad runs, though numerous and frequent are overshadowed by how it feels to hit a goal or experience that elusive runner’s high. The sense of accomplishment I get when I break through a barrier, however small or mighty it is, is contagious and that feeling makes every disappointing step worth it.

I didn’t decide to dedicate 6 months of my life chasing an impossible goal to half ass it. I decided to try to BQ to remind myself that I’m stronger and more capable that I think. So wherever you’re at, if you’re a brand new runner, a half marathoner chasing a sub 2 hour finishing time, or a Boston Strong marathoner, we’re all in the same boat. We’re all fighting to push past what we think is possible in an effort to put our strongest foot forward. The only way we’ll fail is if we fail to try. Just keep fighting. Until next time, #RunSelfieRepeat.

Read More:
Why I’m Chasing An ‘Impossible’ Goal Of Qualifying For Boston

Coming Back To Running After It Breaks Your Heart