They say running slow isn’t a character flaw, quitting is. Unfortunately, the older we get, sometimes the slower we move.

“I’m just happy to still be running,” said Janet Romayko, a 70-year-old Connecticut resident who doesn’t want to stop until she drops. She swims, bikes and runs 40 miles every week. She knows her limits and when she’s overdoing it.

Not long ago, Romayko broke her kneecap. For the average 70-year-old, this would mean her running days are over. But for her, it meant several weeks of recovery and then hitting the road. With no discernible signs of osteoporosis, she attributes that directly to regular exercise.

She is not alone. There is a growing demographic of runners over the age of 50 with a strong desire to be fit and healthy. In Colorado, the Fifty States Half Marathon Club has more runners over 50 than under.

“We have more people in their 50s and 60s,” club founder and president Nicole Blomgren says. “And we have a lot more women than men in our club. Our members run for fun and enjoy feeling engaged.”

Related: How Can You Stay Fast After 50?

Although we seem to show an ability to show up to start lines in high numbers, our abilities to keep the same pace over time often diminish. According to a study from the Biomechanics Laboratory at East Carolina University in Greenville, N.C., the biggest weak spot is our ankles. Dr. Paul DeVita, Professor of Kinesiology at the university and one of the co-authors of the study, says that subjects in their 70s and 80s have shown a “distal to proximal shift” in ankle-to-hip muscle function. In other words, the older we get the less we use our ankle and calf muscles. This manifests itself as a downgrade in speed.

The good news is that there may be something we can do about it: Cross-training does seem to make a difference. Many runners feel that participating in other sports helps them with their core strength, and DeVita agreed.

Allison Macsas, who founded Rogue Running in Austin, Texas, says the difference between younger and older runners has more to do with experience than it does age.

“If a 20-year-old and a 60-year-old each have a decade or more of running experience,” she explains, “then they are already in tune with their bodies, have a solid endurance base and know how to push without pushing to the point of injury.”

Claire Secker, a 60-year-old runner with Rogue, says she feels lucky to be injury-free. Like many others, she also attributes that to cross-training with swimming, biking and yoga. While she has noticed her speed decrease over the years, she makes up for that in stamina.

“I definitely can’t go as fast as some of the younger runners. I don’t respond as quickly,” she explains. “But my stamina has increased. So I can go longer, just not as fast.”

Secker also says this is why a lot of older runners move to ultramarathons. Those races obviously require endurance because of the distance; speed is almost secondary. Regardless of what you train for, she pointed out, paying attention to your own limitations is important.

“Listen to your body,” she explains. “That little ache or pain will develop into something bigger if you ignore it.”

Macsas mirrors Secker’s opinion. “The 20-year-old can probably handle more volume and the 60-year-old will probably require more days off,” she says, “but both have the wisdom to know their personal limits.”

Sally Saxon, 65, runs half marathons with Blomgren’s group. As an older runner, she agreed with Secker’s points about endurance and training.

“Though my pace has slowed down a lot from when I ran during my 30s and 40s, my endurance is actually greater,” she said. “That’s simply because of training and conditioning over a long period of time, gradually building up distance.” 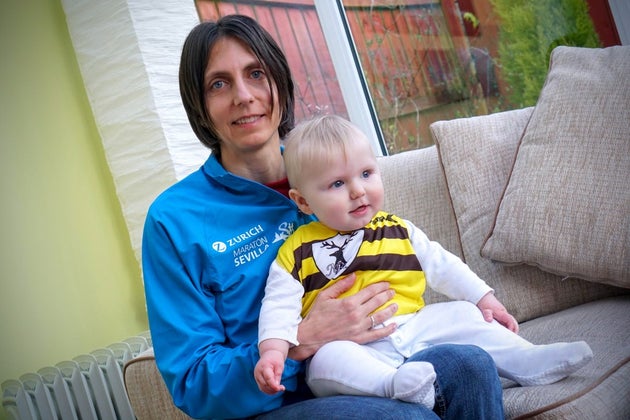 Similarly, Gladys Ganiel, 39, is all too familiar with her limits. Growing up in the craggy terrain of Maine, she started running at 13 when she saw other kids on the cross-country team. Now a research fellow in the Institute for the Study of Conflict Transformation and Social Justice at Queen’s University in Belfast, Northern Ireland, she has competed in a number of races, including the U.K.’s Commonwealth Games. But injuries are part of the sport and she has certainly had her share. During the Rotterdam Marathon in 2012, she injured her Achilles tendon.

“When you hurt your Achilles like that, you just can’t run. But I knew I wanted to keep competing, so I cross-trained to keep fit,” she recalls. “When I was able to start running again some months later, I was surprised at the fitness I retained.”

As a marathoner making a bid for the Olympics in Rio this summer, she still does strength training twice a week and includes Pilates when she can squeeze it in around time with her toddler. But Ganiel credits her training with keeping further injuries at bay.

Related: She Became An Elite Runner After 40

“I am curious about how good I can be, and how much I can push my body and mind to reach my personal limits,” she expresses. “I think the buzz I get from running improves my productivity and creativity.”

Age and ability matter less as we grow older than doing something that mentally and physically feels good. Just run for the finish line. Who cares how long it takes to get there?