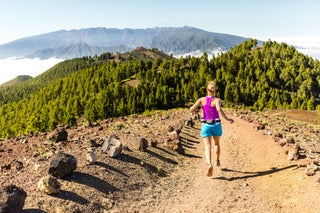 Megan Harrington is a 30-year-old runner that is no stranger to taking a workout off-road. After competing in cross country throughout high school and college, the Cambridge, N.Y., native found herself doling out training advice to family and friends interested in the sport. Harrington became such the go-to expert that she decided to make it official and set up shop as a certified coach. See what races she considers worth the dirt!

Thrill Seeker
Located about 30 miles north of Austin, Texas, the Dare to Ascend Trail Marathon, Half Marathon and 5K are all primarily run on the scenic Goodwater Loop that circles Lake Georgetown. Since proceeds benefit outdoor adventure programs for at-risk youth, you can feel good getting dirty.
Where: Georgetown, TX
When: 9/26/15
ascendoutdoor.com

Urban Adventure
It may seem like an oxymoron to run a trail race in the middle of a city, but the Mayor’s Cup Cross-Country Series 5K delivers its fair share of dirt. Set in Boston’s Franklin Park, the course takes thousands of runners though open fields and doubletrack trails. After running this event each year in college, I knew to prepare for the 200-meter incline on Bear Cage Hill—you’ll see why it’s called that when you reach the top.
Where: Boston, MA
When: 10/25/15
baa.org

Magic Mountain
Set among the picturesque canyons in the Utah desert, the Moab Trail Marathon, Half-Marathon, 5K and Kids’ 1K is one of the country’s most beautiful events. The terrain is challenging, but the views are worth it. This race will also be the host of the 2015 and 2016 U.S.A. Trail Marathon Championships.
Where: Moab, UT
When: 11/7/15
moabtrailmarathon.com

Rocky Runner
I’m a fan of this brand’s gear, so The North Face Endurance Challenge series caught my eye. With a network of well-established trail races in the U.S. and Canada, from New York’s lush green trails in the Catskills to Utah’s rocky Wasatch Mountain, these races are perfect destination events.
Where: Multiple locations
When: Multiple dates
thenorthface.com

California Sun
The Tahoe Trail Running Series has something for every runner. From kid-friendly runs to ultra marathons, this series promises off-road fun for anyone. I’m eyeing the Lederhosen Trail 10K race in Squaw Valley, which features a contest for the best lederhosen and dirndl! After the finish, runners can knock back a cold Bavarian beer at Octoberfest.
Where: Multiple locations in California
When: Multiple dates
tahoetrailrunning.com

Prepare For A Trail Race With These:
What Foods Can You Expect At Trail Race Aid Stations?
The Beauty Of Trail Running

A Race Guide for the New Year