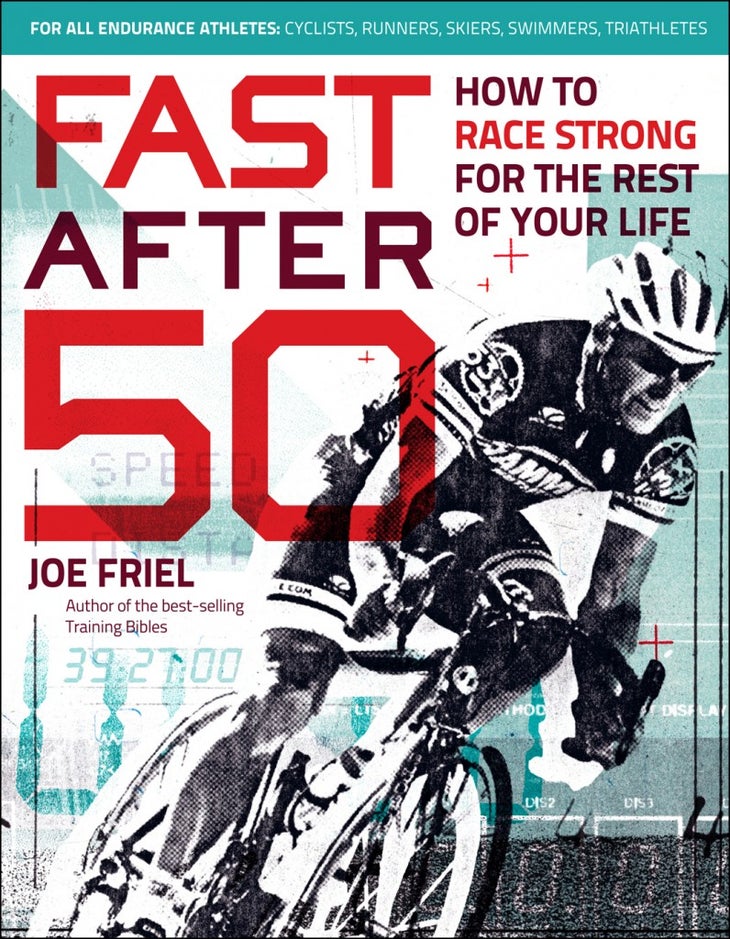 *Excerpt from Joe Friel’s Fast After Fifty, published with permission from VeloPress.

There may be plenty of voices telling you that you shouldn’t be exercising so strenuously, that advancing age means you must slow down. Maybe they’re telling you horror stories of broken bones and heart attacks. Look at so-and-so, they say. He wouldn’t stop, and now he’s getting knee replacements. Quit training and competing. Overdoing it is bad for you. No one keeps racing forever. Back off—you’ve earned a rest. Enjoy the twilight of your life.

Rest assured, you can indeed remain vigorous into your 50s, 60s, 70s, and beyond.

How does science explain the phenomenon we call “aging”? Interestingly, scientists are still working on that question. They don’t fully understand it yet. They have theories, and there is ongoing research, but they don’t have solid answers. Instead, most researcher have chosen to examine only the symptoms of growing older. Here’s a partial list of run-of-the-mill signs of aging as reported in most of the research:

There’s a caveat, however. What we know of all these depressing changes has been based on studies of normal aging people. By “normal” I mean people who are generally representative of our society—many of whom are sedentary, overweight, and unmotivated. If you are active and vigorous, you aren’t normal—and that’s good.

As an aging athlete, you are still experiencing some markers of aging, but from a smaller subset of symptoms. Nearly all exercise physiology research has found that you can expect certain performance-diminishing changes with advancing age. The symptoms of aging that concern athletes include:

These are the symptoms we need to reverse or at least minimize in our training and lifestyle.

Before going any further, let’s make one important point clear:

First, exercise keeps you healthy and much younger than what is normal for our society. Moreover, that exercise does not have to be highly intense to foster excellent health and allow you to lead a robust life as you get older. Exercise, regardless of intensity, is powerful medicine when it comes to health.

If your reason for exercising is to live a long life filled with vibrant family activity and fun for many years to come, and you don’t really care about how fast you are, then vigorous and frequent exercise of any type, including long, slow distance, is the way to go.

So far, about all science knows about exercise and aging is that there seems to be an inverse relationship between older people’s volume of exercise and their risk of premature death, regardless of cause. In other words, the more you exercise, the less likely you are to die early.

Of course, there’s more to life than just how long you live. Quality is at least as important as quantity. Living a long time in loneliness and boredom, with little in the way of activity except for occasional exercise, is not what any of us wants. Quality of life means not only participation in sport as an athlete but also simply being an energetic and dynamic person in all aspects of life.

While aging does inevitably take a toll on the performance of aging athletes, it’s small compared with the loss of functional performance that normal, inactive people experience due to disuse. Most people “rust out” due to inactivity rather than “wear out” from being overly active.

Additionally, exercise plays an important role in slowing aging. Genetics and lifestyle — often referred to as “nature” and “nurture” — are both important, but there is reason to believe that the major contributor to performance decline as we get older is nurture, with nature playing a smaller role. This contradicts what our society has come to believe—that the vagaries of aging occur at a given rate, are inevitable, and are completely outside one’s control. That line of thinking makes is easy to throw your hands up and surrender.

But a vigorous lifestyle— and especially strenuous activity, or “high-intensity training” — has a powerful influence on physiology and has the power to keep old age and poor performance at bay.

Longitudinal studies have shown that reduced training intensity resulted in marked changes in performance-related physiology of athlete subjects, and loss of a vigorous lifestyle may also explain, along with diet, declining lifespan in native populations.

Some scientists who study sport and aging also see the balance tilted toward the nurture side because as we age, exercise behavior (nurture) appears to play a significant role in how our given genetic biology (nature) plays out. This balance could be around 60-40 or even 70-30. In other words, 60 to 70 percent of our reduced performance might be explained by changed in training (and lifestyle in general), with the changes due to biological aging accounting for only 30 to 40 percent.

With that in mind, the chief question must be: What do we need to do to get the large nurture portion right so that we can stay fast after age 50?

The first question in our plan is this: What physical performance changes are occurring as you become older? And I do mean you. Although the research indicates what senior athletes generally experience with aging, not all of those conclusions may apply to you.

To get started on this question, perhaps the most important discovery you can make is to determine what is holding you back — your specific weaknesses, or “limiters.”

Many areas of your life could produce nurture limiters, such as the amount of time you have to train, your diet, how much sleep you get, your speed of recovery, and much more. But our focus right now is the big rocks—those few things in your training and lifestyle that may well be limiting your performance. For nearly all senior athletes, the performance-related changes that are most common are what I call the “big three” aging limiters:

These changes in aerobic capacity, body fat and muscle make up the big three most common reasons for the decline in performance as we get older, but there’s more happening in our bodies that we need to understand in order to counteract the negative effects. These include loss of bone density, an increasing propensity for total-body acidity, a slowing of the metabolism, a loss of joint range of motion, and more. But many of what we consider to be the inevitable changes of aging are things that we have some control over.

Why Do I Have Trouble Sleeping After a Hard Workout?