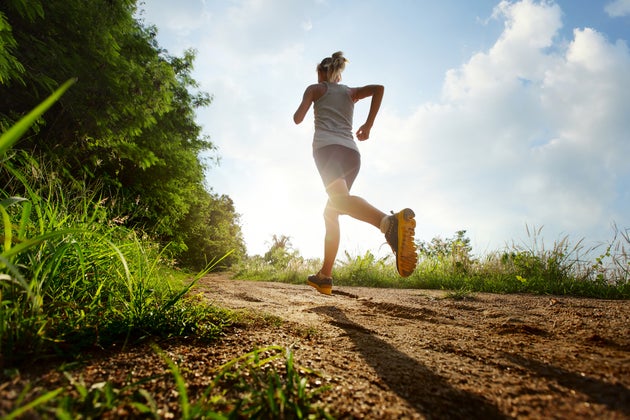 As a former athlete (softball), running was our punishment. Though a necessary evil of the sport, running was secondary to the actual game. If we missed a groundball or struck out looking, we ran laps. During those grueling laps, I remember how much I hated it and how I needed to be on the field, not out on this track watching someone else take my starting spot. The act of running for me has always been to get back on the field, or to hit a mile marker or to get a certain time.

For the past five years I’ve desperately tried to become a runner, sporadically even calling myself one, even though I feared the secret society of real runners would expose me as a fraud.

Now that my athlete days are over, at least in the sense I’d always known, it’s time to face my running demons. After some soul-searching, countless hours of various running groups and consulting a few professionals, I found my disdain for running isn’t uncommon.

RELATED: This Is The Number 1 Reason So Many People Hate To Exercise

In fact, Dr. Kacey Oiness, an Indianapolis-based sports psychologist with St. Vincent Sports Performance says athletes with preconceived notions about running are fairly common, especially if they have a history of running used as “punishment.”

“When this is the case, it’s helpful to reframe their views on running and assist in setting goals that allow them to see participation from a different perspective,” Dr. Oiness explains. Oiness works with professionals, Olympians, and collegiates and says there are many tools an athlete can use to reframe what running means to them. These tools include goal setting, positive self-talk, focus drills, visualization and performance routines.

“Starting with goal setting, an athlete can take something that they once used to just try and ‘get through’ and turn it into an exciting challenge. They can also use goals to break down running into segments and guide their focus throughout, so they don’t feel overwhelmed. By breaking down their training into manageable parts, they will also be better equipped to control their self-talk and focus by creating cue words they use throughout various components of their run. Even if someone is just planning to use running to stay-in-shape, as opposed to a competitive outlet, approaching it with goals will help keep it enjoyable and lead to a sense of accomplishment,” she says.

David Siik, a well-known running coach and creator of Precision Running, a systemized treadmill running format at Equinox, agrees that running doesn’t have to be boring.

Siik says the most important part is to have a plan. “Even if you feel you aren’t creative, write something down before you start the run. For example, instead of slogging through 3 mindless miles, make a goal to stop every mile and do an exercise, like lunges, squats, or sit-ups. Having a plan is engaging your mind, which is the biggest missed opportunity in running,” he explains.

RELATED: Hate Running? You Need To Read This

Another thing Siik tells runners is to get interested in the math of running. “For example, start really using your timer on your watch. Go halfway out and see how much you can cut your time on the way back. A goal that simple can make it more fun, and is a self challenge so there’s no pressure from other runners,” he says.

For those who feel they lack the runner’s gene, the hardest part is our negative inner monologue or what Oiness refers to as “self-talk.” Studies have shown that positive self-talk does in fact boost endurance (lasting as much as 18 percent longer), and both Siik and Oiness say it’s different for everyone.

“At the end of the day, if an athlete can learn to alter their perspective on running and see it as an exciting challenge, they are going to gain more enjoyment from their participation. Learning to connect with the rewards (physically, mentally, and emotionally) will allow them to manage the challenges that come along with the sport,” Oiness concludes.