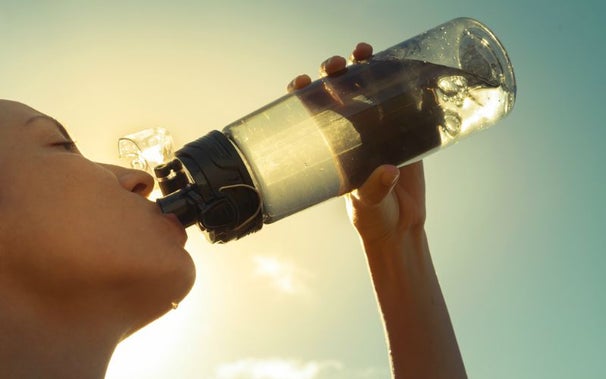 Of all the elements involved in running, not only is proper hydration one of the most important factors of all, but it is also one of the most overlooked—often until it’s too late. For many years now, I do almost every one of my runs carrying a handheld filled with electrolyte sports drink. It still amazes me that even experienced runners I know are vastly under-hydrated and can’t seem to figure out why they bonk on a run. Consider the fact that if you lose as little as one percent of your body weight during a run, your performance goes down by two percent! That is an amazing statistic when you consider it. I know a number of runners who tell me that they “can’t stand to carry anything when they run,” so if you are of that ilk, make sure you run a course where you have access to water fountains or bottles of liquid you set out on the course in advance, to stay well hydrated.

So why is staying hydrated so important during your run? Because water is key in keeping your blood, which contains much needed oxygen and sodium, flowing quickly and easily to your heart, lungs and muscles—as well as helping every body part needed to run well function at its peak. However, when you become dehydrated, consequently your blood becomes thicker, which makes your heart work harder to pump blood to the body parts that need its fuel. Drinking liquid with regularity during running will then offset your liquid loss through sweating and keep everything in balance and working order. One note of caution, especially for beginner runners, is that you can actually drink too much water while running! This is called hyponatremia, and it is difficult for many newbie runners to understand because most coaches pound into your head to, “drink, drink, drink!” As a beginning runner, you are probably not running at the same effort as a veteran runner (yet), which means you might not be sweating as much. In other words, you don’t lose liquid from your body as quickly as someone running at a harder effort and pace.

Also, mitigating factors, such as some people simply sweat more than others during exercise, can contribute to dehydration. Your weight, size and gender can also increase or decrease how much you sweat. These are all things that you more than likely will have to learn by trial and error as you start to run consistently. Make sure to pay attention to your level of hydration, as it can be the difference between running well and enjoying it, or working way harder than you need to be and not enjoying it. To stave off hyponatremia or over-hydration, try to drink sports drink with added sodium, more often than just plain water. This is because when you are over-hydrated, your sodium level is low and your blood volume is diminished; consequently an anti-diuretic hormone (ADH) is released, which retains water. This leads to further diluted blood and a lower sodium level. Not paying attention to these factors can lead to possible hyponatremia, which is actually more dangerous than dehydration and can be fatal! Truly there is no “one method fits all,” but the bottom line is that if you do not hydrate properly as you run, you will not run as well as you can. Finding the right balance for you between dehydration and over-hydration is something you will learn as you continue to consistently run.

Here are more things about water:

Why You Should Use Water Stops On Race Day

What’s The Deal With Fancy Waters?