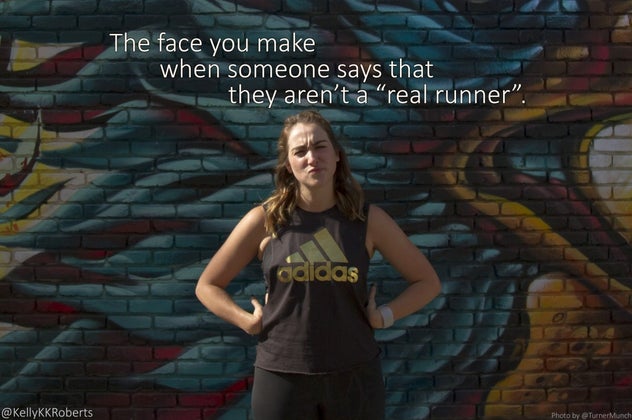 Are you someone who is struggling to call yourself a runner? I was. I had the hardest time believing that I was a runner until I ran a marathon. I know the “real runner” versus “fake runner/not real runner/imposter runner” (what do we call ourselves when we’re in runner limbo?) debate appears to be black and white but for anyone struggling, it’s a lot harder than just getting permission to call ourselves runners. I remember looking at inspirational quotes like, “If you run, you’re a runner” or “There are no fake runners” and thinking “YES! THAT MAKE SENSE!” But whenever anyone asked me if I was a runner, I would immediately respond, “Oh no. I’m not a real runner.”

At my first races, I remember looking around and seeing the people who looked like real runners and feeling totally out of place. I didn’t know what a negative split was or what “pacing yourself” meant. I wasn’t out there trying to run a PR. My goal was to survive and not have to be picked up by the sweeper van! I couldn’t compare myself to the runners in the front of the race. Those were the real runners. I was just an imposter runner…or so I thought. Turns out, the only person you’re ever really competing against is yourself.

I think one of the reasons why some of us struggle to call ourselves runners is because we haven’t realized that running is a part of our identity yet. Until that moment when you’re bit by the running bug, running feels intimidating and impossible—or at least it did for me. A turning point for me was realizing that running wasn’t something you do to try to look a certain way. Running actually inspires you to be a better person because it makes you optimistic, driven, purposeful, present, grateful, vulnerable, strong, inspired, empowered and most importantly, happy. Being a runner forces you to value yourself not only for who you are right now but for who you were and for who you want to be.

Running isn’t one size fits all. You don’t have to look a certain way, run a certain mileage or maintain a certain pace to be a runner. It doesn’t matter if your goal is to run a mile or a marathon; if you run, you’re a runner. All you need to do is embrace it because whether you believe it or not, you’re already a runner. So take your time and do what you need to do. When you’re ready to believe it, you’ll look back and only appreciate running that much more.