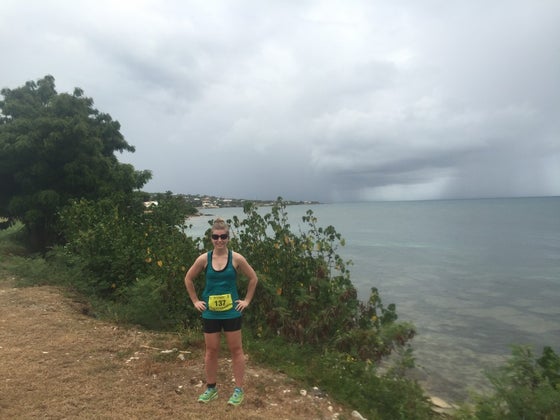 Summer is what makes women out of girls, what separates the strong from the weak and, if you live in a place where heat and humidity wreak havoc on your running routine, it also is the difference between a strong, successful fall marathon or a long, slow build-up to a winter goal race. There’s no doubt about it; running in the dead of summer is tough, unless you happen to live in a place where the temperature never gets above 70.

For the rest of us, the dog days of summer mean a mountain of towels in the trunk of your car (to cover every inch of your driver’s seat so you don’t soak through it after a sweaty run), carrying even more fluids than usual, carefully monitoring electrolyte intake and watching your miles build as the sun seemingly never sets.

Yes, summer running is where fall PRs are made, but that knowledge doesn’t make running through what feels like a giant, sweaty wall any easier. Take heart, though! Summer running doesn’t have to be your favorite season of the sport, but it doesn’t have to be a drag, either. Step your way through the summer towards a fall PR with these tips:

Plan out your water stops—including ice!: If you’re doing a long run, place cold drinks and fuel out along the route, or strategically plan your runs to go past your car or a convenience store. Consider placing some ice in a small cooler at one of your stops and place it inside your hat or down your sports bra. Trust me it’s a life saver, and your shirt will be wet with sweat anyway. Might as well embrace it!

Start acclimating now: Eventually, even the mornings will be hot and sticky, but right now, they might still be mostly cool. Consider going for your runs a little later in the morning (or earlier in the evening) when the day is warm, but not too hot. This will make the transition into sweltering summer mornings more bearable because your body is already used to the slightly warmer weather.

Consider taking your speed work inside: If you’re like me, just surviving an easy run in August is a feat. Forget about speed work! The reality is that if you’re gunning for a PR, you’ll probably need to incorporate those fast runs at least occasionally. Consider taking your speed work indoors and onto the treadmill instead of outside if you have a problem with overheating. Many gyms will offer seasonal or monthly memberships (albeit at a slightly higher rate than a year-long contract), and if it gets you out the door and running a bit faster, it’s worth it!

Invest in some high-tech gear: Running clothes have come a long way, baby! The cotton shirts of yore are long gone, and they’ve been replaced by some truly lightweight and effective technical fabrics. But it doesn’t stop there! New technology means that some companies are exploring ways to improve your body’s hydration and lower your core temperature, helping you run longer and easier. These shorts from Qore Performance feature pockets for their patented “cold packs,” which recharge under cool water and lower the temperature of the blood flowing through your femoral artery. This hat from Mission Health Care actually gets colder when placed in water and can be recharged throughout your run, helping keep your head cool! There are a ton of great options out there that can really take your gear game to the next level.

Read More:
5 Ways To Beat The Heat On Summer Runs
The ‘Joys’ Of Summer Running

Planning to Run a Race Soon? Here are 3 Things You Should Do to Set Realistic Race Goals

Break Free From Your Device Dependency