Whether an athlete competes in wrestling, equestrian or rhythmic gymnastics, she has to have an incredible level of skill to compete at an international level. On top of that talent, no matter what her event, she must also be off-the-charts, insane, are-those-muscles-even-real fit. That’s why we picked the brains of eight Olympics-bound women across the same number of sports to find their favorite exercises.

Warning: We’re talking to some gold medalists here, so many of these are tough. On the plus side, they’ll get you in incredible shape and build strength to help you increase the speed and power of your runs. Bonus—all moves can be executed in the comfort of your living room…perhaps while you’re watching the games!

Exercise photography by Oliver Baker
*Melinda Winthrop competed in the pole vault at the U.S. Olympic Track and Field Trials but did not advance to the Olympics.

CLAIMS TO FAME: By the time she graduated high school in 2015, Simone Biles was already the most decorated female gymnast in World Championship history, having won the all-around title at the 2013, 2014 and 2015 games. Biles will take her first crack at the Olympics this summer in Brazil.

“I like doing leg exercises to be stronger and fit for my skills. My favorites are squats and box jumps—then I grab a CorePower [yoga class] for recovery.”

a) Stand in front of a low bench or box. Bend your knees slightly while tightening your core. b) Jump onto the box, c) landing as softly as possible. Step or hop back to the start position. That’s one rep. Complete 2 to 3 sets of 5 to 15 reps. 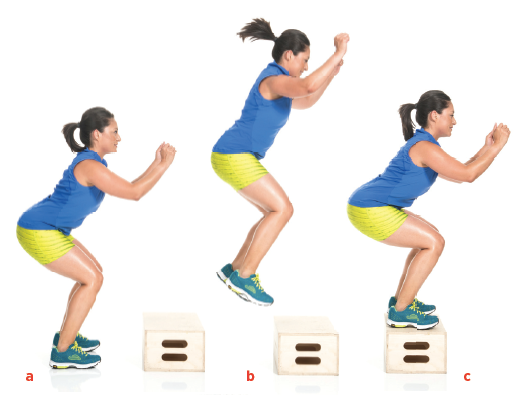 CLAIMS TO FAME: Currently the most dominant triathlete in the world across the 2014 and 2015 season, Jorgensen clinched an astonishing 13 consecutive wins in Word Triathlon Series races—the previous record was three. Making her success all the more impressive, the University of Wisconsin graduate didn’t start competing in triathlon until after college and is a CPA, formerly employed by Ernst & Young.

CLAIMS TO FAME: After attending her first wrestling practice at the age of 6, Gray was hooked. In her nearly 20-year career, Gray has racked up some impressive victories, including three World Championships, two World Cups and one Pan American Games. In Rio, she has her heart set on gold in the 75 kg division.

“The move seems to work my lower back, core and so much more than just my glutes.”

For this exercise, you will need to secure your feet. Use a hamstring bench at the gym, hook your heels under a heavy piece of furniture or have a friend hold your legs. a) Kneel with your feet secured, using your glutes and core. b) Lower your body down slowly (hinging at the knees). c) Go down as far as you can while maintaining control (the goal is the floor). Squeeze your glutes to rise to the start position. That’s one rep. Complete 2 to 3 sets of 3 to 5 reps.

CLAIMS TO FAME: One of the most decorated runners of the 21st century, Felix won her first silver medal at the tender age of 18. More than a decade later, she has earned a total of six Olympic medals and boasts a personal best of 21.69 in the 200 meters. (That’s 2:53-mile speed!)

a) Start in a split-stance position, with your right leg forward and your left leg back. Bend your right knee and dip your left knee toward the floor until you’re in a lunge position. b) Jump up and switch legs in midair, a scissor-like motion, and c) land in a lunge position with your left leg forward. Jump up again and alternate legs. That’s one rep. Jump continuously, without resting. Complete 2 to 3 sets of 10 to 20 reps. 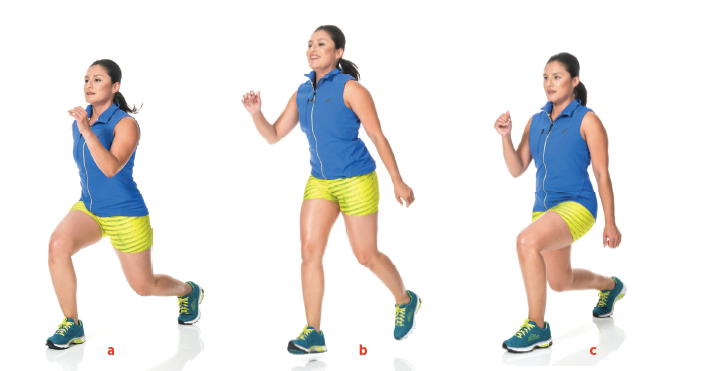 CLAIMS TO FAME: Stevens is best known for her incredible feat this February at the Colorado Springs Velodrome, where she smashed the Union Cycliste Internationale hour record by covering 47.98K (riding nearly 30 miles per hour). The former Wall Street analyst turned pro in 2009 and currently competes for team Boels-Dolmans and Lululemon.

“This is part of a 10-minute stretching/core routine I do every night before bed. It’s a satisfying way to finish up a hard day of training or racing, and is my cue to be done with this day and prepare for the next.”

Place your right elbow and right foot on the ground with your hips raised. Hold this position for 20 to 60 seconds. That’s one rep. Complete 2 to 3 reps on each side. 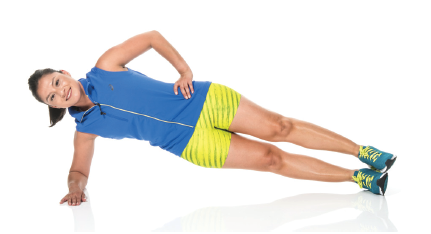 CLAIMS TO FAME: Clocking in at a mere 5 feet tall and 105 pounds, King is proof that strength isn’t defined by size—she can clean and jerk twice her bodyweight. King discovered the sport (and her natural talent) at the age of 25 after taking up CrossFit. In 2015, she earned silver in the snatch at the Pan American Games and secured her ticket to Rio by finishing first in her weight class at the Olympic Trials in May.

“Squatting is great for developing leg strength and power as well as whole-body stability.”

Hold two dumbbells by your shoulders or a bar across the yolk of your back. a) Push your hips toward the back of the room until your thighs are parallel to the floor, keeping your torso as upright as possible. b) Lift back up, driving through your feet so that the weight is evenly distributed through your forefoot and heels. Think about a 2-to-1 down-up ratio, meaning lower for 2 counts and rise for 1. Complete 2 to 3 sets of 5 to 10 reps. 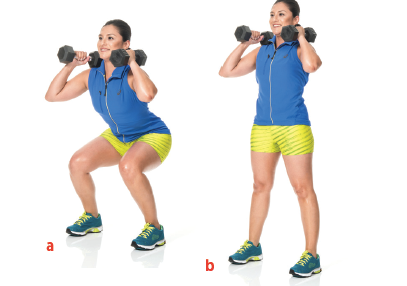 CLAIMS TO FAME: Forward for the Chicago Red Stars, Press represented the U.S. in the 2015 FIFA World Cup—and made her mark in the opening game, scoring a goal against Australia that led her team to victory. A graduate of Stanford, Press still holds the record as the university’s highest scorer to date.

a) Lie on your back holding a kettlebell above your right shoulder. b) Bend your right knee, placing your foot fl at on the ground. c) Roll onto your left elbow, then lift up your hips and shoulder o the ground as you press into your left hand. d) Slide your left leg back into a kneeling position. e) Press into your right leg so you are standing up. That’s one rep. Complete 2 to 3 sets of 3 to 5 reps on each side. (Modification: Perform exercise with no weight.) 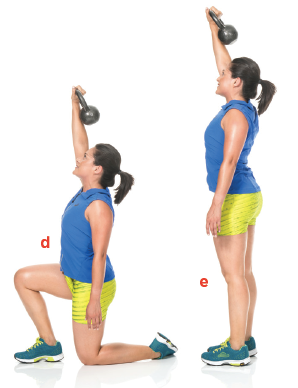 CLAIMS TO FAME: Withrow balances a job as assistant coach at the University of Montana with her career as a professional pole-vaulter and Lululemon elite ambassador. She won bronze in the 2009 and 2011 U.S. Indoor National Championships and boasts a personal best of 4.6 meters—more than 15 feet!

“As a pole-vaulter, I need to be equally strong in my legs, core and shoulders.”

Using two dumbbells, a) place the weights at your shoulders (palms facing in). b) Dip three-quarters of the way into a squat, then c) quickly explode up using the strength from your legs to push the dumbbells above you (palms facing out). Hold for a count of two, then bring the dumbbells back to your shoulders with control. That’s one rep. Complete 2 to 3 sets of 5 to 10 reps. 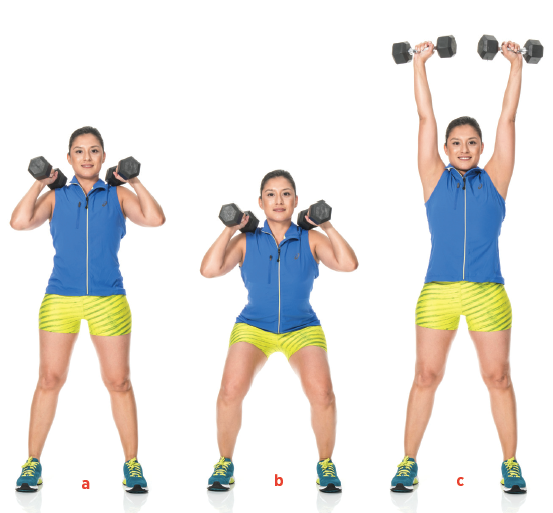