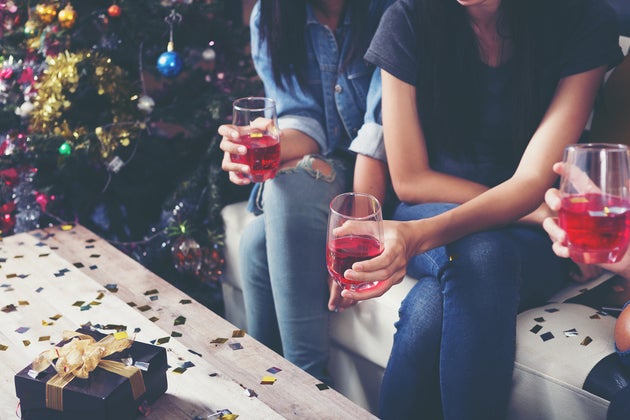 Bring you own food.

The tips to avoiding indulging in holiday food are endless. It seems that everyone wants a plan to avoid over-indulging. But the problem with trying to avoid the generous spread of food that greets us at nearly every party and family gathering is that we set ourselves up for failure from the beginning.

Sometimes those tricks work. Sometimes if you eat enough carrots beforehand, bring your own nitrate-free, free-range beef jerky, chew enough gum and walk around with water sloshing in your belly you’ll avoid eating those bacon wrapped scallops and that pumpkin pie. But what if you do all those things and you still eat the scallops and the pie? How do you feel?

Maybe like a waterlogged mess, but more accurately you feel GUILTY.

Why? Because you’ve set yourself up to feel guilty.

We try to avoid holiday foods because we think they are “bad.” And when we indulge in foods that we’ve previously deemed as “bad,” then we set ourselves up to fall into the same category. “Ugh! I ate that bad food. Gah! I can’t believe it. I didn’t have self control!” Which translate subconsciously into “I am bad,” and in walks guilt.

And the guilt stays with us far longer than the extra calories.

What if instead of trying to avoid indulging during the holidays you changed the way you looked at food in general? Instead of categorizing foods as “good” and “bad,” “clean” or “unclean,” what if you simply looked at all food as potential fuel and accepted life with its ebbs and flows, instead of a consistent progression along a linear path? What if you gave yourself permission to indulge in the foods you feel your body craving, accepting that this is a season in the ebb and flow of life? What if you acknowledged the potential weight gain and ate the food anyway? What if you decided there would be another time and place for being selective and discriminating about your food, and instead ate whatever you felt like eating in that moment?

Instead of walking into a holiday party feeling afraid that you’ll succumb to the “bad” food, you walk in feeling empowered to eat what you like, to indulge in the foods that taste oh-so-good, even if the satisfaction only lasts for a moment. Give yourself permission to eat the bacon wrapped scallops instead of carrot sticks because, gosh darn it, you eat carrots every damn day. Indulging in the moment isn’t necessarily a “bad” thing and if we break the power of “bad,” then we break the power of guilt. And when we break the power of guilt we change the way we feel about ourselves, and that is probably the best gift you could give yourself this holiday season, regardless of what you do or do not eat.