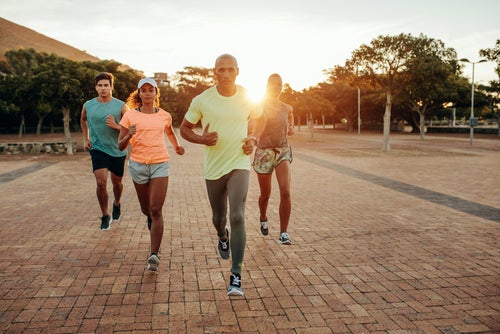 It’s late spring of 2016. I’ve just qualified for the Boston Marathon for the first time at the Eugene Marathon with a time of 3:30:15, a PR by more than 22 minutes. (An achievement that took the better part of five years and five sub-par marathons.) After the race, my husband and I pile into our tiny Honda Civic and begin the two-hour drive home. I sit with my legs elevated on the dash as my husband navigates traffic. He looks longingly over his shoulder and into my eyes and asks, “After Boston, you’re done running, right?”

I recoil in horror. Blood, sweat and tears went into that initial qualifying race and once I hit that elusive BQ mark I expected to feel fulfilled and whole. To be sure, I was ecstatic. It was a very satisfying and fulfilling experience; I did something I once thought was impossible! But I certainly did not feel “done.”

At times it can seem as if qualifying for the Boston Marathon is THE bucket list item, as in the only thing runners get amped about. Few other goals are made out to be as worthy or as challenging, but that doesn’t mean you or I need to stop setting big goals! If you’ve already met the BQ goal, like I have, or if you’re completely sick of hearing about the Boston Marathon qualifying standards, or if running the time to get in isn’t in your wheelhouse right now, you might be left wondering what else is out there.

Goals For The Competitive Amateur

Yes, you can qualify to run the TCS New York City Marathon with a time standard! The majority of the field for this heralded major world marathon is accepted through a lottery program, but a small number of bibs are available for speedy qualifiers. Runners must meet strict qualifying standards for their age and gender. Lest you think getting into Boston is tough, the average NYC qualifying time is more than 20 minutes faster! The fastest age groups must complete a full marathon in 2:53:00 (men 18-34) or 3:13:00 (women 18-34), though half marathon standards are also available.

Already running as a sub-elite? It’s time to shoot for something a bit more challenging, like the American Development Program organized by the Chicago Marathon. The program provides competitive amateurs race morning amenities such as private toilets, heated tents and snacks, plus start corral placement at the front of the field. Accepted runners must meet extremely tough marathon standards (sub-2:31 for men and sub-3:01 for women) and are often competing for personal best times or Olympic Trials qualifying performances.

The holy grail of competitive running, the Olympic Trials Marathon is open to any runner who meets the incredibly fast qualifying standards on a sanctioned course. Many runners spend years dedicated to the Olympic Trials Qualifier (OTQ) regardless of their chances of actually making an Olympic team. This goal is not for the faint of heart, but if you’re competitive and committed, it’s worth a shot! For the 2020 Olympic Trials Marathon, accepted runners must meet the “B” standard with a “gun” time (chip times are not accepted) of 2:19:00 (men) or 2:45:00 (women) in order to compete. “A” standard times are even faster and provide runners with funding and support if the standard is met.

Of course, not all runners want to be competitive; some runners don’t care about qualifying standards at all. The hype surrounding the BQ and the process of analyzing every single mile split can seem daunting, draining, boring or overall uninteresting. For those seeking non-competitive achievements, there are many goals worth pursuing, too!

Goals For The Non-Competitive Amateur

Forget about time standards and focus on one of the hardest challenges of all: running every single day. You’ve heard stories about run streakers, some who have kept up the habit for more than 52 years! But you don’t need to be a local legend to streak–simply register with the United States Running Streak Association and start running. The association defines a running streak as running “at least one mile (1.61 kilometers) within each calendar day. Running may occur on either the roads, a track, over hill and dale or on a treadmill.” Note: runners will not appear on the running streak list until a full year has been completed. The best part about the run streak? It can continue indefinitely!

Put a time limit on your running streak and aim to Run the Year with Run the Edge! In essence, Run the Year is a fitness challenge to run or walk the amount of miles equal to the calendar year, i.e. 2,017 miles in the year 2017. Runners and walkers can even divide the miles and conquer amongst a group, club or team, allowing athletes of all levels to participate. Register with Run the Edge to receive an official shirt, monthly challenges, milestones and motivational tips from professional runner Kara Goucher.

Finishing a marathon is no small achievement, but completing 50 marathons in all 50 U.S. states? Now that is an achievement of epic proportions! Runners can attempt this lofty goal on their own, or they can join the exclusive 50 States Marathon Club, a non-profit dedicated to the promotion of health, fitness and the common goal of running a marathon in each of the 50 states. To apply for club membership, runners must first complete ten marathons in ten different states and fill out an application. Once accepted, runners pay dues to the club each year and receive perks such as periodic newsletters, finisher trophies, quarterly reunions and more.

Whether you’re a competitive amateur or sick of the BQ hype, there are plenty of running goals worth pursuing. What’s your next big, scary running goal?

7 Tips On Qualifying For The Boston Marathon

Boston is Back, and Everybody is Running It: Americans Include Molly Seidel and Des Linden