For most runners, the words “Personal Best” mean a lot more than just an impressive or flashy goal time. A “PB” is a goal that not only feels incredibly intimidating, but it can seem impossible. I remember the day I declared that I wanted to run a sub 4 hour marathon. I had just run my very first, traumatizing marathon in 4 hours 43 minutes and 39 extremely painful seconds. My parents and I were driving home from the race and my Dad turned around and asked me if I would ever do it again. “Yes.” I said, “But next time I want to do it under 4 hours.” Then I closed my eyes and slept for 20 hours. 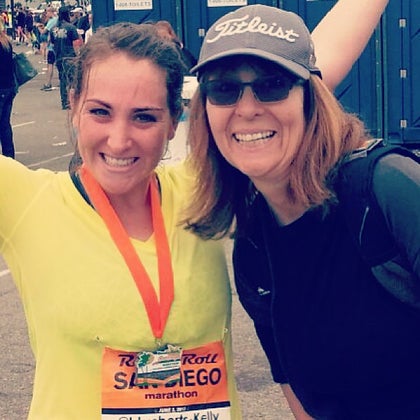 The rate at which I went from President of the “I hate running club” to President of the “Born again runners club” happened in the blink of an eye. I started running after I graduated from college. I moved home to live with my parents while I sorted out what I would do next and I moved into my Brother’s old room. My little brother Scott had passed away in 2009 and I really struggled to give myself permission to be happy after he left us. I ended up gaining and then losing over 75 pounds and after I moved in with my parents, I found myself falling back into unhealthy ways when I was feeling sad or lonely.

It was Thanksgiving Day when I decided to go for my first run. I hadn’t slept the night before because I was drowning with grief and anxiety and as I watched the sun rise. I felt like I just needed to move. This was my snapping point, but the gym was closed and running was my only option. So I ran and walked 3 miles in a little over an hour. Two painful months later, I ran a half marathon and five months after that, I ran a marathon. My life and my identity changed.

I’ve never been someone who really runs for time. Running isn’t just my escape, it’s the time when I feel the most in control of my life. It’s the time I get to spend catching up with my closest friends and just be myself. No makeup, no expectations, no rules. All you have to do is go forward. But I couldn’t shake that nagging feeling in my heart about wanting to break four hours. This year I pushed myself harder than I ever pushed before. I found myself accompanying friends at the track, convincing other friends to run hill repeats with me and I started showing up to November Project workouts here in the city. I was going out of my way to get stronger and faster but I struggled to admit that I wanted to actually run a sub 4. “I want to have fun!” I’d proclaim. Which was true, but a cop out.

When I found out that I was running the Berlin Marathon, I decided that was my chance to run a sub 4. It’s the flattest and fastest course in the world. If it was going to happen it was going to happen there. But I half heartedly committed to my goal time. To anyone who asked about my goal I’d say, “I really want to break four hours but I want to have fun too! We’ll see what happens.” Seems innocent enough, but I was making excuses because I didn’t think I could do it. If you pretend not to care, you somehow convince yourself that you won’t be as disappointed when it doesn’t happen. I had done the training and I was ready to run a sub 4 but I spent way too much time on my phone and I ended up running Berlin in 4 hours 3 minutes and 12 seconds. Now don’t get me wrong, I had an AMAZING time when I ran the Berlin Marathon. I won the “Most fun had during a marathon” competition but I would be lying if I didn’t admit that I was disappointed in myself for not actually going for the sub 4. It was right there. I was so close! I was running the New York City Marathon a month later but I didn’t think I would feel strong enough to run hard. And NYC is a tough course! We’re talking inclines on inclines on inclines!

The New York City Marathon is unlike any marathon in the world. I spent the first 19 miles of the race high on high fives. I kept glancing down at my watch and seeing that I was right on track for a sub 4. But I went out a tiny bit too fast and I kept telling myself that I was going to bonk around mile 20. But I didn’t. I felt amazing and after I saw my sister for the second time, I decided to put my phone away, dig deep and go for it.

That final 10K was the most stressful 6.2 miles of my life. I was in it to win it until I caught my sister for the third and final time. She was holding a sign that said, “Kelly I’m so proud of you and I know Scott is too.” I lost it. My brother is the reason I started running and he’s the reason I have this new identity. Everything came into focus and I knew right then and there I couldn’t pull back or make excuses, I had to make the sub 4 happen.

Hell on earth exists and it’s called 5th Avenue. It wouldn’t end. I kept watching my watch trying to find an excuse to pull back because my quads were screaming. Then my Physical Therapist Mike Riccardi came appeared out of nowhere next to me right when I started to fall apart. Then he reminded me that this final 5k was what I had sacrificed and worked so hard this year for. It would all be over in less than 20 minutes and I just had to dig deep and go hard. After a high five and a selfie, I took off towards Central Park. At 3 hours and 51 minutes, I hit mile 25 and I knew I had to move if I wanted to make it happen. That final mile was hell. It was painful and it was terrifying. Then after the longest mile of my life, we hit Columbus Circle and were back into the park. I knew the finish line was just a tiny hill away. 3:58……3:59… I remembered that I started my watch early but I didn’t know how early. I watched my watch hit 3:59:30 and the finish line felt like it was impossibly far away. I started to cry as I blew past two groups of friends, overwhelmed that it might happen, and then I crossed the finish line as my watch said 3:59:59. 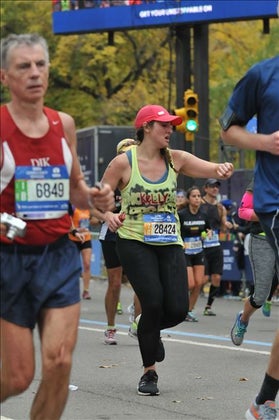 I didn’t know if it happened. I just wanted to sit down when my phone blew up with, “YOU DID IT!” I couldn’t believe it. It only took 5 tries but I had finally run a sub 4 hour marathon. I haven’t felt that intimidated or scared of a goal since before I started running and this year’s New York City Marathon reminded me that it’s OK to commit to a goal and fall short just so long as you give it 200%. Life’s too short to fail to commit. You are only cheating yourself when you hold yourself back because you’re afraid of letting other people (or worse yourself) down. This time around, I accomplished two goals, I spent the first 20 miles having the time of my life and I spent the final 6.2 pushing myself through that mental block. One thing running a marathon will teach you is that you have to run the mile you’re in. You can’t get ahead of yourself and you really have to trust yourself and your training. You have to know that even though it feels impossibly far away, the pain will not only be over in just a matter of time but it will all be worth it. I may not always run for time, but sometimes it’s just as fun to see what you’re capable of after spending months working your ass off. You just have to remember that nothing is impossible. Until next time, #RunSelfieRepeat.