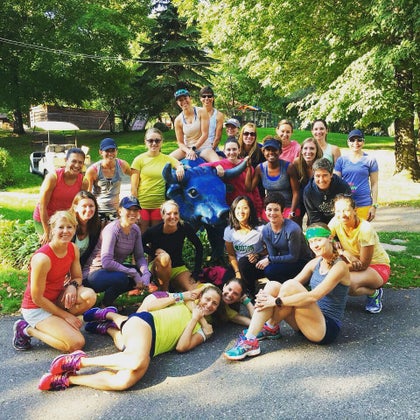 I recently returned from a women’s running camp in Deerwood, Minn. This was my third experience at a running camp over the past year—and my second in 2016. Running camps have exploded over the past couple of years and chances are there’s one near you. My camp experiences have all been tied to my membership on the Oiselle team, but like I said, there are a LOT of running camps (many women-only) out there to choose from.

3 Reasons To Attend A Running Camp:

A highlight of camp is learning more about many different aspects of running. At the camps I’ve attended this education has come from camp directors, elite athletes and the other attendees. I’ve attended sessions on nutrition, form drills, talks about goal setting and how to manage race day nerves. I’ve taken key things away from each camp I’ve attended and been able to integrate those lessons into my running and training.

Aside from the obvious running that takes place at a running camp, there are usually other fun activities. I’ve done a high ropes course, swam, played mini golf, went floating down a river, had (multiple) dance parties and MUCH more. I’ve also just had fun enjoying some time away and a bit of solitude during the early morning without the responsibilities of home.

Running! Of course, the main focus of a running camp is running. At each camp I’ve been to, there have been options to run daily and I’ve so appreciated that. I’ve done speed work, long runs, easy runs and races at the various camps I’ve attended. It’s actually each time been a really fun way to break up my training and to infuse my running with a different scenery. Running camps tend to be in beautiful locations and each camp I’ve been to has offered scores of trail running—some technical trails and some just paved trails and both options have been great.

While most camps aren’t cheap, if you can swing it, I highly recommend investing in yourself and your running. I’ve left each camp I’ve attended feeling happy, invigorated, excited about running and ready to put all my newly learned knowledge to the test. I’ve also made new friends at each camp and with social media, I’ve been able to stay connected to them easily after camp ends.

Would you attend a running camp? Tweet your thoughts @WomensRunning!