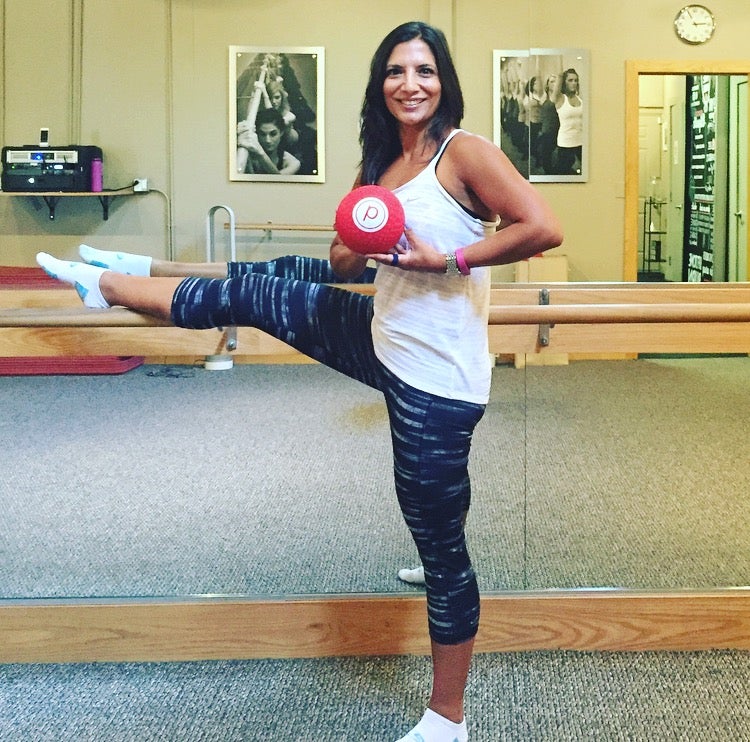 When I was training for my first marathon, my goal was just to finish. I was determined to cover those 26.2 miles and cross that finish line if it meant grabbing on to another runner’s leg for dear life and being dragged along for those last few miles. Fortunately, I was able to rely on my own two legs to get it done. Once I started training for my second marathon, I realized that I needed some new goals to motivate me through a second round of 26.2, which led to looking into ways to become stronger, faster and an overall more well-rounded athlete. My quest lead me to trying Pure Barre.

So what is Pure Barre and why did I want to try it?  It’s a low-impact ballet barre workout that uses small isometric movements to sculpt and create long, lean muscles. To me, it is almost the opposite of what I do when I run, and at a time when I am logging a lot of high-impact miles, I wanted to have more low-impact strength options on my cross-training days.  I also wanted to work all the muscles that I don’t use as much when I run to enhance my running. And I wanted to try it because, more than 30 years ago at the age of 11, I had a ballerina teacher tell my mom that I didn’t “have a ballerina’s body or a ballerina’s legs.” It abruptly led to me leaving ballet class once and for all.

So what did I think of my foray back into “ballet class”?

Is there an earthquake in Los Angeles, or is it just that all those muscles that I don’t normally use when running are rapid-fire quivering? It’s amazing that just two days before my barre class, these same legs had run 10 miles without any discomfort whatsoever, yet within a couple of minutes small, 1-inch movements, they were screaming for mercy. Working leg muscles I don’t usually work means protecting my knees and ankles while overall strengthening my legs. “The more you shake, the more you change.  Embrace it.” That sentence was written on a board outside of the classroom, and I’d say I got an A+ in that assignment.

In addition to being a runner, I’m a little bit of a yogi. I thought that all the plank and boat poses I’ve been holding are hitting all the muscles in my abs, but clearly I’ve got some other core muscles that need to be worked, and who knew that sitting propped up against the wall and holding the bar while using my legs for small movements would work them. Stronger core = better and faster runner.

I’ll admit that other than yoga, most of my arm strength training exercises comprise me doing some random biceps curls and triceps kickbacks with 10-pound weights while catching up on a little guilty pleasure reality TV. At Pure Barre class, I realized that repetitively lifting 2- and 3-pound weights in a sequence of well-thought-out exercises can give me quite a different workout than the higher-weight and lower-repetition exercises that I do on my own.

A place for everyone.

A Pure Barre class does not look like a scene from Black Swan. There was a variety of women, all different ages, body types and fitness levels, and every single person could modify the workout to their comfort or intensify to their liking.  (There were no men in my class, but men are welcome. I wish there had been one in mine. I would have loved to see a big muscular guy with legs that are quivering like a feather after one minute.)

So what were the parts of the workout that this runner didn’t enjoy as much? The two biggest reasons that I run are for the runner’s high, and because running is when I get to zone out or let my mind wander to whatever thoughts it wants to and dream whatever it wants to dream. Pure Barre is a low-impact workout, so it’s not surprising that I didn’t get the feeling I do from a runner’s high. Also, these little movements are actually very hard and require a lot of concentration. I couldn’t zone out and had to really focus to make sure that I was doing the movements right. My class instructor was fantastic, going around and making sure that everyone was using the proper technique and doing the movements right, and in particular checking on me and the other newbie in class with every new exercise.

Expect that it may take three to five classes for you to get really comfortable in understanding some of the movements. And just one more thing to note: you’re exercising on a carpeted floor, so if you are an overachiever who plans to both run and go to Pure Barre back to back, and you sweat a lot like me, you should probably go to Barre first and do your run after.

So what did this runner hope to achieve from trying a ballet bar class? To get a full-body strengthening workout and use some muscles that are getting neglected on her run. The class definitely did deliver on that, and I can see how repeatedly going would improve my running. And as I left the class, I thought about what that old ballet teacher of mine would say if she could see these “non-ballerina” legs of mine that have carried me through thousands of miles.