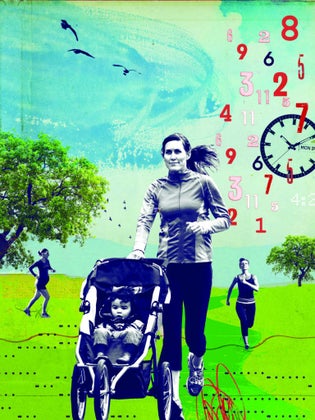 Finding the time, energy and motivation to run is tough for anyone. Add a baby to the mix and it can seem nearly impossible. But running moms know the benefits are worth the effort- from keeping your energy up and demonstrating a positive attitude for your kids to finding a bit of “me time” and losing the final pounds of baby weight. So we asked running mamas, including elite runners with children, busy celebrity moms and regular parents (with no coaches or live-in nannies) for their tips on how they make running and motherhood work for them.

Olympic marathoner Kara Goucher ran during her entire pregnancy—including the day she went into labor! “It was a pretty slow shuffle, but my legs became stronger because of the extra weight,” she says, which “made it so much easier to come back.” Very few of us are world-class marathoners, but most of us can stay active during pregnancy, says Dr. Quinn. “A woman may be able to run throughout pregnancy as long as there are no complications,” she says. Make sure to get clearance from your OB first.

After giving birth to her son, Camden, reality star Kristin Cavallari didn’t rush back into running. “I took it really slow and started with walking uphill on the treadmill,” she says. “After a couple weeks, I slowly started jogging. I didn’t push myself. As soon as I felt I had enough, I stopped.” If you had a vaginal delivery, wait at least two weeks, and usually closer to four to six weeks, to exercise, says Dr. Bridget Quinn from the Division of Sports Medicine at Boston Children’s Hospital. If you had a C-section with no complications, hold off for six to eight weeks.

The 2011 World Mountain Running Champion, Kasie Enman, needs to take in a lot of calories to support her 100-mile training weeks. “I have to stay really on top of finishing what I eat because my meals are often interrupted by some kind of kid need, ” she says. While you might not need quite as many calories, make your nutritional needs—not just your kids’—a top priority.

Strength training is good for any runner, but it’s especially important after giving birth, says Dr Laura Riley, the director of Massachusetts General Hospital’s Labor and Delivery Department. “Ligaments are loose and muscle tone may be poor depending, so prevent injuries by not jumping in full force,” she says. She recommends starting with planks as an easy way to begin rebuilding your core.

Even after you start running, be okay with running more slowly. Bronze medalist Deena Kastor recalls the few weeks after her daughter, Piper, was born: “I ran around the block and still felt great, exhilarated to move—but once I put my Garmin on a few weeks later, I realized how slowly I was going.” Elite runner Goucher says she didn’t really feel like her old running self until 10 or 11 months after giving birth. “It takes time, so be patient, but it will come back,” she says.

Pump Before You Run

Childcare expert Anastasia Dekantios, a Long Island, N.Y., mom of a 3-month-old, says pumping breast milk before a run is a must. “You don’t have to pump everything out unless you plan to run for three hours, but to have your breasts a little lighter is very helpful,” she says. Dekantios also advises investing in a very supportive sports bra to prevent stretch marks and says she always puts nursing pads in before a run.