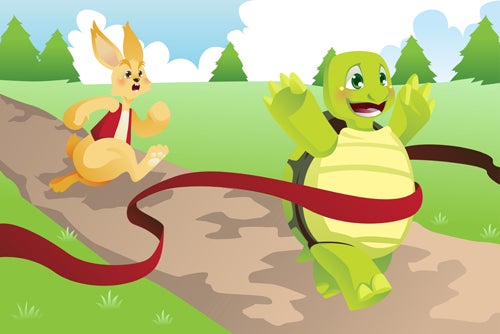 As a kid, I loved Aesop’s fables. But I was completely irritated at the tale of “The Tortoise and the Hare.” Secretly, I always wanted the Hare to win. I mean, he was clearly the fastest—irrespective of his negative attitude. The facts pointed to him “deserving” to win—so why did the Tortoise get the victory lap? Didn’t that seem silly?

(This whole line of thought was ironic, considering that I was never one of the fast kids.)

Intuitively, I sensed that the fast animal “should” win. But the truth was that I also understood that the Tortoise totally won because he was persistent, not cocky, and kept moving forward. At the end of the day, being a Tortoise or a Hare doesn’t actually matter—it’s what you do with what you have. The Tortoise seems to be my spirit animal, now that I am all grown up. I have finished four iron-distance triathlons by channeling my inner Tortoise—partly because I had no Hare in me.

Even when I run the ever-speedy 5K and drum up some love from my non-spirit animal, the Hare, I am still like a hybrid Tortoise-Hare.

What gives? Like Ricky Bobby in Talladega Nights, I just wanna go fast. I wanna go fast! That is the first plan. Step one: go fast. Got it. Now, how do I go fast? Hurmph.

For starters, it’s easier to run fast when you weigh less and have less mass to move. If I get skinny, then I will be fast—right? In my opinion, “getting skinny” is the dumbest thing that anyone can actually set as a real goal. For a Tortoise, “getting skinny” is not so much an impossibility as it is an unrealistic expectation, setting the Tortoise up for all sorts of weird emotional roller coaster rides. Sure, a Tortoise can lose weight and get fitter. But if it was that easy, wouldn’t everyone in the world be a Hare?

So getting skinny to find the Hare isn’t the answer for everyone. I have worked my tail off for well over the past year at this elusive “getting skinny” proposition, and while I have lost pounds and tons of body fat, I am still a Tortoise.

And yet I still want to go fast.

I have found that the first rule in getting faster is defining, in your own mind, what speed actually means. This is a difficult thing to do, because it’s very easy to start the compare-yourself-to-others game. Defining speed as something totally objective—and not subjective—is the default for us. Of course, I suppose that speed is objective. An object is in motion at a certain velocity, and that speed is measurable. However, I have found that defining what “fast for me” means—instead of fast on an objective scale—has unlocked all sorts of barriers for my swimming, cycling and running speeds.

When I did my first 5K back in 2010, I pushed myself as hard as I thought I could go at the time, and ended up with a time just under 39 minutes. Objectively, sure, that speed is technically quite slow. For me at the time, straight off the couch with zero running legs under me? It was fast. Over the past five years, I have worked to get faster, which isn’t necessarily the easiest thing to do while training for a long course. The ever-speedy 5K isn’t something that I ran very much over the course of Ironman training, but I did get faster, regardless. Now, instead of chasing the sub-30-minute 5K, I am chasing the sub-27-minute 5K. While I won’t win any land-speed records, a sub-27-minute 5K for me would be Ricky Bobby fast—and I look forward to hitting that mark sometime. Through this process, I had to learn what fast meant for me and for my body—not for the 5K champions of the world.

Next, I have found that it’s okay to go “fast” and be absolutely terrified during the process. The first time I cranked up the treadmill to 8.2 (again, fast for me), I thought I was going to die. I really thought to myself, Today is the day that I fly off this damn thing and hit the treadmill behind me in a violent, flailing scene—bloody head split open and people snapping pictures and uploading to Instagram– #hereshelies #triedtogofast.

But I cranked the treadmill up and I ran. I didn’t run long at that speed, but I did lots of intervals—I think about 30 sets of 30-second intervals at an 8.2, with 30 seconds of rest in between. And it was okay; I did not die. I wanna go fast! Allowing myself brief moments of speed and glory has really worked to build my confidence. Knowing that I can go “fast,” even if just for a blink in time, is an amazing feeling.

Finally, allowing myself to be majorly uncomfortable has allowed me to test my speed and find what I am truly made of. I have found the 5K to be just one of the most brutal races on the planet; I would almost take a half marathon over the crazy 5K any day. Running 3.1 miles, going as hard as you can, is really a tough thing to do. I have found that, for the most part, the Tortoises of the world don’t come to running with the knowledge of what going “fast” actually feels like. I have news for us Tortoises—going fast really hurts. The lungs burn like fire, the quads are ripping from their proper places and skin and sweat is flying in all directions. Parents are shielding their small children from looking at you—it’s awesome. We Tortoises tend to push to a certain limit (like the start of breathlessness) and back off because it hurts. This is why Tortoises are great for long-distances races: We can putter along all day in Zone 2 because it feels easy, and we are comfortable not going into the dark places at fast paces. In contrast, when you ask a Tortoise to put on the Hare cape and go run a 5K, we tend to resist.

In summary, it’s totally cool and okay to be a Tortoise. I am one. Being consistent, persistent, relentless and wearing a tough shell are all amazingly fantastic attributes in our sport. I am sorry for giving the Tortoise such a bad rap in all those years when I thought the Hare was better. Neither is better—both are different and admirable for many reasons. The Hare sometimes allows the ego and objective speed get the best of him. The Tortoise can get discouraged for a million other reasons.

The best bet is to love yourself and be proud of all your efforts and races. But always ask yourself if you are doing the best you can with what you have. I challenge my fellow Tortoises of the world to really push yourself in your next running race or workout. Ask yourself if you can channel your inner Hare, just for a little while, and see what you are made of. You might be surprised and learn to believe that “fast for you” is sometimes exactly all the fast you need.

Meredith Atwood (@SwimBikeMom) is a weekly contributor to Women’s Running. She is a four-time IRONMAN triathlete, recovering attorney, motivational speaker and author of Triathlon for the Every Woman. She is also the host of the hit podcast The Same 24 Hours, a show which interviews interesting people who make the best of the 24 hours in each day. Meredith has two books coming out in 2019. Read more at SwimBikeMom.com.

The Slow Runner’s Guide To A Fast(er) 5K

Why You Should Add Long, Slow Runs To Your Training