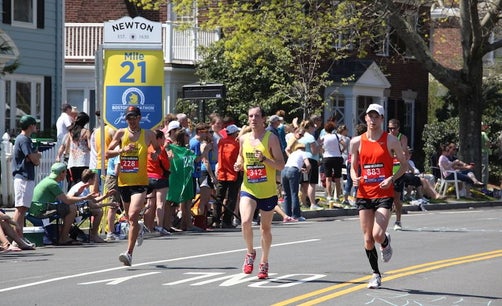 The Boston Marathon is notorious for its crowds, tradition and, of course, its ups and downs. Its reputation makes it one of the most desirable marathons for any runner to complete. While it’s an amazing accomplishment to run any marathon, competing in the Boston Marathon is on many marathoners’ bucket lists. The course is probably best known for its series of hills—the Newton Hills—which begin at the Newton Firehouse and culminate in the infamous Heartbreak Hill near Boston College on Commonwealth Avenue. Here’s what to expect while you’re traversing the Newton Hills stretch of the Boston Marathon.

During Mile 17, you will make the first of the course’s famous turns right by the Newton Firehouse onto Commonwealth Avenue. This significant turn is undoubtedly a spot with lots of energy and excitement from the crowds. It’s also the first hill out of the gate in the series of several major climbs throughout the Newton Hills. This hill is steep and a little under half a mile long. After you crest over the top, there’s a downhill stretch which brings you into Mile 18 and a relatively flat section.

Just past the Johnny Kelley statue during Mile 19, you will meet the next hill of the series. The inexperienced Boston runner may mistake this stretch for Heartbreak Hill, but that feat is still ahead! The first part of this hill is steep, but not too long. There’s a bit of a reprieve in the middle before it climbs again for a short while. Close to Mile 20, you’ll cross Centre Street and spot the Heartbreak Hill running company on your right.

Here’s where you’ll get your first of many visual cues that Heartbreak Hill is impending. Starting at Mile 20, you can see Heartbreak Hill and you have some time to prepare mentally for the final major hill. Then it’s time to take a deep breath, look ahead and embrace your shorter stride!

Heartbreak Hill is a steep, half-mile trek uphill at a 3.3 percent incline. It’s probably not the most difficult hill you’ve ever encountered, but its position both in the series of hills and the overall race makes it particularly challenging. Some people prefer to conquer Heartbreak Hill by putting their head down and focusing on the immediate next step. I prefer to keep my eye on the prize and use some physical cues to track my progress. As you’re climbing the hill, to your left you will see three “Do Not Enter” signs and then straight ahead you’ll see a set of traffic lights which mark the top of the hill. I like to count the signs and keep my eyes straight ahead on the traffic lights. The crowds will give you a lot of energy at this part of the course and you will definitely have a huge sense of accomplishment when you reach the top. As a reward, you get another small incline and then a segment of downhill running to bring you into the closing miles. During training, we often exchange high fives or cheer on other runners at this point. Reaching the peak of Heartbreak Hill can be exhilarating!

During the Boston Marathon, the energy is contagious on the course; it certainly motivates and propels runners on race day. Similarly, in the weeks leading up to the marathon, the camaraderie on the hills is so helpful and something that makes training in Boston incredibly unique. As daunting as the Newton Hills are, you can absolutely overcome each obstacle. Just keep going ahead, find your mantra, and tell yourself you can do it!

Fun Facts About The 2018 Boston Marathon

History Of The Boston Marathon