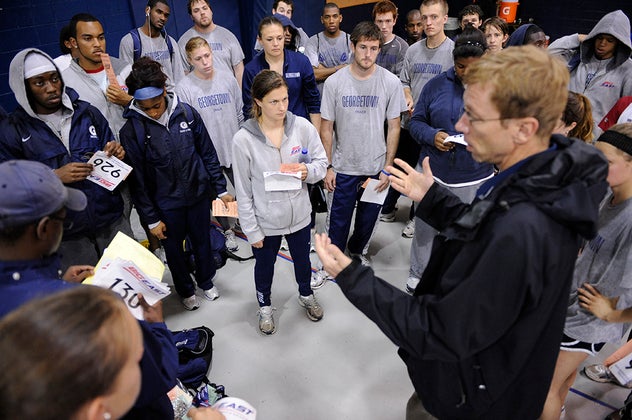 Throughout his career Pat Henner, here prepping some of his former collegiate runners for a race, has made it a point to help runners reduce anxiety before races to optimize their performances.

For weeks on end, the alarm clock has jarred you awake for your morning run. You’ve cleaned up your diet, planned weekends around training and swapped happy hour for yoga. Now, with the race just days or hours away, the hard work is done, yet a thorny dilemma persists. You feel an anxiety that threatens not only your race performance, but even worse, your love of running. As negative thoughts take over and pre-race anxiety builds, the challenge you should be eager to meet instead looms darkly on the horizon.

How do you control that anxiety and harness the power of your mind to tap that wealth of fitness you’ve built? We caught up with Pat Henner, a successful coach who has helped thousands of runners optimize their mental game.

With 30 years of coaching experience Henner has coached 160 Division I All-American athletes, and recently had four runners break the 4-minute mile barrier in the same race. Now on a motivational speaking tour across the country, Henner helps runners of all persuasions to optimize mental performance.

Formerly the director of track and cross country at Georgetown University, Henner notes that while physical training is important, his championship teams were ultimately distinguished by their level of mental preparation. Much of his philosophy is grounded in this performance/arousal curve. 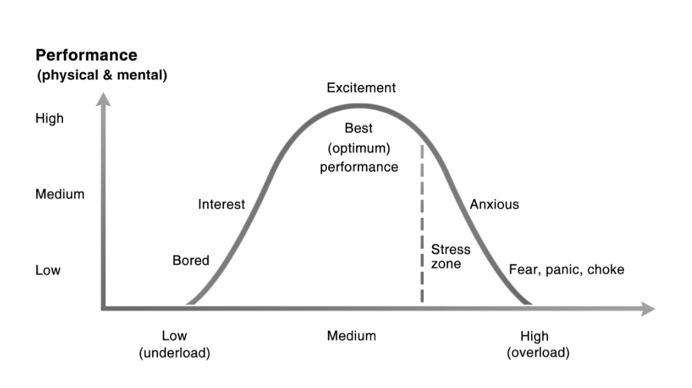 On the left side of the curve lies lethargy, and to the right is the fiery pit of crash-and-burn anxiety. Balanced between the two extremes is your optimal mental state. Though beautiful in its simplicity and potentially transformative, getting to this place is a journey that takes work for most us. Here are some tips from Henner on how to get there.

The arousal curve is important for every race distance. Learn to shift your curve accordingly—further to the right for shorter distances, and back left for longer efforts.

Spend too much time contemplating your race and you can go over the top, into a state of anxiety resulting in muscle-tension destructive to breathing, stride patterns, and technique. Try reserving just one 5–10-minute time-slot during your day to visualize race strategy.

By focusing on goals like final time or place, an anxiety-producing fear of failure can take root. Once you establish those goals, use your designated time slot to consider the strategy and tactics that will enable you to execute effectively.

Instead of dreading the pain and pushing yourself into anxiety, know that it’s coming and flip the script by affirming that the moments you have trained for have arrived. Mentally embrace the physical anguish that comes with running hard, trust your training and power through it.

Every runner will integrate these concepts differently, depending on their experience and where they fall on the curve as a race approaches. Before you head into your next race, run through this checklist of tips to put yourself in an optimal mental state so you can maximize your performance.