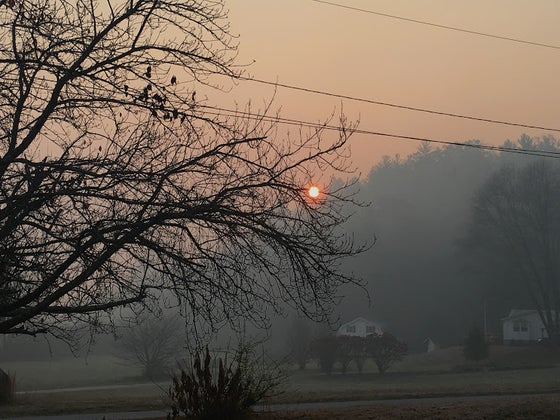 A few months ago, there was a spate of wildfires in the Southern Appalachians that made the air smoky and filled with a light grey ash that settled over everything—cars, grass, people. It was a dry, heavy, fog that engulfed our homes and distorted the color of the morning sun, making it an eerie, haloed orange, if we were able to see it at all. Some folks walked around with medical masks over their noses and mouths, and others walked around with noses stuffed into the collars of their shirts.

Me? I was traveling back and forth between Georgia and points north doing marathons and other events, not realizing the toll that the smoke, ash and diminished air quality would have on my lungs.

One night post-New York City Marathon, I felt a strange crackling coming from the left side of my body on each exhale as I tried to fall asleep. In the silence of the night it sounded almost as if someone was crinkling stiff Saran Wrap every time I released carbon dioxide-filled air from my body.

I couldn’t sleep. I listened to and felt this weird sound over and over again, trying to determine what it was. Is this wheezing? I don’t have asthma. I’m not sick. What is this? I also noticed that breathing had become a chore. I was constantly fatigued and sometimes the crackling would present itself during the day as I went about the workday—as I was sitting at my desk, standing at the board, walking through the hallway. I would force myself to cough a deeply, trying to expel whatever it was that hid in my chest cramping my style breath-wise. I felt as if I were at a pool, my face hovering above the water, where the humidity is greatest. It took a while to fill my lungs (if they so allowed). My chest hurt. I started to depend on my son’s emergency inhaler to increase airflow to my lungs and decrease the noisy, uncomfortable wheezing and crackling. Every four-to-six hours I found myself puffing on the inhaler just to be able to sleep a few hours before the next dosage.

After a few days of suffering and no sleep, I finally decided to schedule a doctor’s appointments, which led to a CT scan, and it was determined that I was suffering from asthma. The doctor noted that it was likely a result of the poor quality of air that we had been experiencing since the fires had begun in October. And hopefully, this asthma would be transient, as in, it may or may not go away.

ASTHMA? What? How the heck do I have asthma? I hadn’t suffered from asthma-related breathing problems since my preteen years—immediately thought of all the ramifications that this diagnosis could have. Would I be able to run? was the first question I had. Would I be able to continue to live the physically active life I have enjoyed for years without complications? And finally: Would I be able to breathe normally again? Would I?

I was prescribed a corticosteroid, an asthma/allergy medication in pill form, and another emergency inhaler. I puffed on these meds and took the pills as prescribed and almost instantly felt better. I was able to breathe again, and within a few weeks I was able to get back into a training routine (albeit slowly) for spring and summer events.

Is it all perfect now? No. I’m still taking the meds—though less frequently—and my doctor is fully on board with me living my athletic life as normally as possible. On the days when breathing is extra laborious, I slow down. Other days, I run my miles and do my strength training, knowing that this is another hurdle to get over, maybe not quickly, and maybe not ever, but thank goodness for running. Without it, I’m not sure that my lungs would have been as responsive to the medical treatment. I guess I’ll continue to find out in the next few weeks and months.