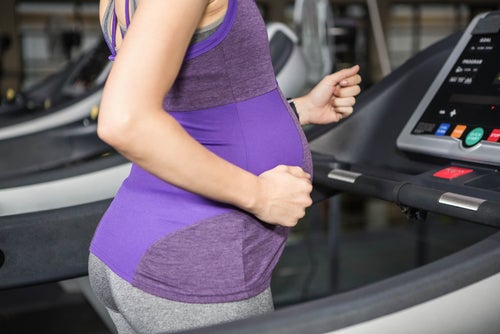 There are tons of advice articles out there that address training tips for races, varying weather conditions and injuries sustained by men and women. But you’d be surprised by the scant amount of training advice that exists for pregnant runners. Perhaps the reason is obvious—maybe women still don’t think they should run while pregnant.

I became pregnant two months before my training was scheduled to start for the Boston Marathon. I was excited beyond belief to be pregnant. But perhaps unlike most other pregnant women, one of my first questions was, “Can I still run Boston?” Most runners think of running as one of the most import aspect of their life. Short from a horrifying injury, runners will stop at nothing to make time for a run.

I searched online and found nothing to answer my question. I was a ball of emotions—obviously I was hormonal, but I was also confused and disappointed. Was this it? I finally qualified for Boston and I wasn’t going to hear the Wellesley girls screaming from miles away? It was as if I had qualified for the Olympics, only to get injured before the Games.

As my husband will tell you, this only made me more determined.

Naturally, I scheduled an appointment with my OB. As I sat in that little room, it was as if I was waiting for a death sentence. Was I going to be prohibited from running Boston? Or worse, was I going to be sentenced to a pregnancy without running? As it turned out, I was a free woman. My OB was my biggest fan in my quest to run Boston. As I drove home, I was both relieved and scared. I had clearance to run, but I knew it was going to be a tough road to get to that starting line.

As with training for any running event, there were both mental and physical components to my training. In this case, the difference was that the physical component got bigger by the day. I had bad days and awful days. I prayed for a day that my shins, arches and back wouldn’t ache at the same time. After five months of training through a Buffalo, N.Y., winter, I toed the line in Hopkinton, Mass., while six and a half months pregnant. The gun went off and I ran 26.2 miles of sheer glory and pride to the finish line in downtown Boston. It was the most amazing and emotional race of my life. Two and a half months later, I gave birth to a healthy and beautiful baby girl.

A message to all the pregnant runners out there: don’t hang up your running shoes, because you totally can run while you’re pregnant. Based on my experience, this is the advice I’m offering.

Related: The Scoop on Running Through Pregnancy

Talk to your OB to make sure you have the green light to run.

My doctor indicated that if I had only recently taken up running, he would have advised against it–and certainly against training for a marathon. In my case, I’d already been running for several years.

Consider the temperatures at which you train.

Heat is a huge factor. Training in temperatures above 75 degrees can be risky. Extremely cold or freezing temperatures can also be risky for pregnant runners. Always err on the side of caution. If you think it’s too hot or too cold outside, try running indoors on a treadmill.

Make sure you take in lots of fluids. I know runners hear this a lot, but when you’re running pregnant, it’s extra important to make sure you’re staying hydrated.

Make sure you’re eating enough for you and your baby. On average, a runner burns about 100 calories per mile. It’s important to account for the calories you’re burning. I always ate a snack as soon as I finished a run. Chocolate milk is a good post-workout drink with a perfect blend of carbohydrates and protein.

Scale back your mileage.

I typically run between five and six days a week. When I was pregnant, I adjusted my schedule so that I was running four days a week, instead.

Map out your runs for bathroom breaks.

Even during the early stages of pregnancy, your body produces more fluid than normal. This means you’ll need more bathroom breaks. I mapped out my longer runs so that I could do shorter loops around my house or in areas that would allow me to take a bathroom break every three or four miles.

As you advance in your pregnancy, you’re obviously running with more weight. Even the hormones in your body change and alter your muscles. Common side effects of running while pregnant are sore and aching arches. Consider buying an inexpensive pair of arch supports online or at a running store.

Not every run has to be a complete run. If you’re tired or feeling uncomfortable, walk for a bit and wait to feel better before you resume running.

Don’t be alarmed when your gait changes.

You’ll adapt to the way your body feels while running with that extra load. My running form changed in that my stride shortened and my arms started pumping away from my body. Trust that you’ll naturally adapt to your new gait over time.

Alternate running days with an elliptical machine at a gym.

Running on an elliptical provided a very similar workout without putting as much pressure on my back and feet.

Remember: you are PREGNANT.

I remember beating myself up when I was 30 seconds off my normal pace during a speed workout. Be realistic about your expectations and be kind to yourself. Don’t set a target pace, and leave your watch at home.

If you’re a scheduled runner and have speed workouts and long runs scheduled for specific days, you may have to move your schedule around to accommodate for the way you feel in the moment. Being flexible with your routine will help you be flexible as a mom.

Listen to your body.

It’s okay to get frustrated.

There will be days that you’ll feel frustrated because you can’t run “normally.”  That’s okay–just let it out. I remember one run where tears filled my eyes because I felt so slow and the run was so difficult. Still, I finished my workout–that was all that mattered. Stay focused and take it one step at a time.

Running while pregnant made me a better runner both mentally and physically. I now feel like I can conquer any challenge: after all, if I’m not running with a small baby in my belly, how hard can it be? Now if I’m struggling through a run, I remind myself, “It’s still easier than running pregnant.” Physically, my legs are stronger from carrying extra weight throughout my pregnancy. In the end, I shaved at least 15 to 20 seconds off my 5-kilometer time.

Ethiopian Runners Train Differently. Or Do They?

5 Principles to Improve Your Marathon Pacing

The Common Sense Coach, Episode 1: Why the 5K?

6 of Our Favorite Running Watches