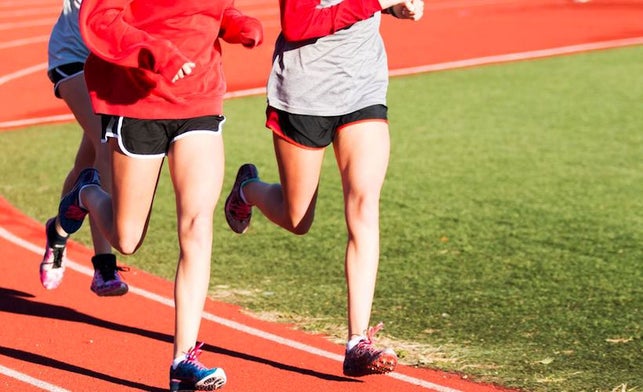 It’s that time of year again: the leaves are starting to change color and little kids are walking around in brand new shoes with backpacks twice their size. Back to school season might be a bummer for kids and a relief for parents, but for college-bound student athletes, this time of year holds a heftier weight. While college application season is stressful enough, there’s an added pressure for students hoping to qualify for limited spots on college teams, and the path forward is rarely clear. For those students, advice from a college recruiter is gold.

Meg Bellino is a head recruiting coach with Next College Student Athlete (NCSA) who works with roughly 1,000 high schoolers each year. Meg’s seen both sides of the recruitment process: before becoming a recruiter herself, she was tapped by the University of Michigan to run middle distance at the Division 1 level. She now works with distance athletes whose ambitions match her own at that age, advising on communication efforts between students and their dream colleges while reminding the kids to enjoy their final high school season while it lasts.

Related: 5 Questions To Ask Before You Commit To Run In College

Meg spoke with Women’s Running earlier this month to offer insight into the recruitment process. From the importance of proactive communication with coaches to proving one’s ability to play well with others, Meg shares her tips on how to pursue those coveted spots.

It’s different depending on what part of high school you’re in. If you are a junior graduating with the class of 2019, Sept. 1 is the first day that Division 1 coaches can begin actively pursuing your recruiting class. With seniors, [this time] is about starting to narrow down what schools they really want to apply for.

I encourage athletes to talk to as many coaches as they can–especially cross-country athletes. After a good race, after setting a PR, after winning a race–anything like that. It’s always a good idea to keep coaches updated on your progress. I stress with my seniors that communication is the number one thing, especially this fall. I think that distance athletes have that advantage: they don’t have to wait until track season to make a lasting impression on a coach. Communication is the number one thing for the senior class this year.

My personal recruiting experience was a little different. The communication dates have changed: the dates that coaches could begin calling athletes used to be after their junior year. This Sept. 1 date is fairly new. I remember the summer after my junior year, I went on a mission trip for 10 or 11 days. When I got back, my parents were like, “You have a lot of voicemails and there are a lot of things in the mail.” It was kind of overwhelming. But I knew I wanted to run for the University of Michigan ever since I started high school. I can still remember when the Michigan coach called me for the first time. It wasn’t until October of my senior year, and we just stayed in touch throughout that year. I had already applied early admission, because that was my dream school. I visited the school in January and decided pretty much right after my visit that that was where I wanted to go. That’s another thing that I stress with my athletes: there’s a lot of pressure to get everything done in the fall, but as cross-country athletes, you don’t want to do anything that could hinder your last season in high school. I have shared my experiences with some athletes, and I think it helps when they think, “Oh, I can wait until after my cross-country season is done to visit these schools—I don’t have to feel pressured to get it all done in September or October.”

How proactive does an interested athlete need to be in talking to coaches directly?

Being proactive is, next to communication, the most important thing that I stress with my athletes. A lot of athletes think that coaches will come to them and they just need to sit back and wait. In reality, I think coaches are excited when they hear from athletes. These coaches want athletes that genuinely want to be on their team and are excited for that school’s program. If you’re showing interest, that coach is more likely to want to talk to you, as opposed to chasing down an athlete who hasn’t answered their phone or hasn’t emailed them back. They want athletes that are excited about their program.

This is mostly for Division 1 coaches. Division 2 and Division 3 are a bit different: they can start the communication process earlier. I always offer to proof emails before they send them. It’s always a good idea to introduce yourself to a coach. You want to say what your PRs are, what your GPA and test scores are, things like that—but also say why you want to go to that school. Try to be as interesting as possible to get that coach’s attention. You want to keep [your email] short and sweet; you want to get their attention, but you want to make it digestible enough for these coaches to read it, take it in and respond right away.

Emailing coaches is so important. Even if you’re a sophomore and they can’t really talk to you until another year has passed, it shows that you’re interested and taking an initiative. It also gets your name in front of them. Say you’re a decent sophomore but you have a huge improvement as a junior. Suddenly, the coach is remembering your name from that email you sent a year ago.

What other qualities do college coaches look for beyond athletic and academic achievements?

The beauty of track is that times speak for themselves. If you’re running certain times, you kind of know which schools you have a shot at running for. Grades matter, as well. That’s one thing with my seniors: I’m like, “Just because you’ve got those test scores and ran those times, don’t slack off your senior year!” Schools will notice.

The next most important thing coaches are looking for is someone with a good personality. As distance runners, all you’re doing is running. You’re either doing track workouts or going for a run pretty much every day. In college, those long run days while you’re running eight to 12 miles, you’re typically talking the whole time. You want to find a program where you get along with the team and fit in well. When you visit schools, coaches pay attention to how you’re interacting with the athletes and how you command yourself with the coaches.

Whether you’re doing an overnight visit or driving just to check out a practice for the day, treat it like a job interview. There are obviously some coaches that are more focused on times and grades, but a majority of college coaches, especially with cross country, are looking at personality and seeing if that personality fits. The last thing you want on a team is drama—especially when you’re going out on 12-mile runs each week. Be professional, be polite, but also be yourself, because that’s how you’re going to know if you fit into the program.

Related: 5 Ways To Bond With Your Cross-Country Teammates

If an athlete is the second or third best on their team, does that mean they’ll be overlooked?

If I have an athlete that’s told me they come from a very good high school but they’re maybe a fourth or fifth runner, they’re not in the top three, something like that…I think that’s where keeping an open mind comes into play. There are so many schools out there. Some athletes might get stuck on the Division 1 level. I’m not going to lie: I was dead-set on running for the University of Michigan. But there are so many Division 2 and Division 3 programs that have produced incredible athletes. We’ve had Olympians from the Division 2 and Division 3 levels. A couple members of Team USA this year for the World Championships were running at Division 2. You might have a teammate who’s recruited by bigger schools, but don’t compare yourself. I think there is a school for everyone.

How many college programs should an athlete try to communicate with as they research schools?

It depends on the athlete and what they want in a school. Some athletes have very particular things they’re looking for. For example, take an athlete that’s studying aerospace engineering, doesn’t want to leave their state and is looking for a school where they have a shot at getting an athletic scholarship. When I talk with athletes like that, their list is probably going to look a lot smaller than athletes who are open to going to school in any state, open to Division 1 and Division 2 and don’t know what they’re going to study. With athletes that are undecided and open to anything: talk to as many coaches as you possibly can. You don’t want to go too crazy with it, but start with a good list of 10 to 20 schools; maybe narrow it down from there.

If an athlete seeks additional training outside of high school programs, can that up their chances?

That’s something an athlete should share with a coach that’s recruiting them. If it has helped them improve their times, it definitely makes a difference. I worked with a trainer outside my high school for my junior year. My junior year was my first year of doing well at state meets and making a name of myself. In that case, it really did help me for recruiting. It depends on the athlete. If you’re doing something very specific training-wise, it’s always a good idea to share that information with coaches that are recruiting you so that they know what your training background is.

What are some common missed opportunities or mistakes that high school athletes make?

The thing that could be seen as a miss is not being proactive. I want to help my athletes as much as I can, and I want to help them find a college that’s going to be their best fit. I love having personal relationships with these families; it’s a really rewarding job. But there will be some families that aren’t as proactive with emailing. Maybe they’re not emailing any coaches, they’re not updating their NSCA profile if they’ve got new PRs, stuff like that. The more proactive you can be as a recruit, the happier an outcome you’re probably going to have.

Recruiting requires a lot of effort and a lot of work and dedication. The top-tier athletes in the country are going to have coaches knocking on their doors. But for the majority of student athletes that aren’t at that top-tier quite yet, the more proactive they can be, the happier they’re going to be in the long run and the better college they’re going to find.

What other recommendations do you have for college-bound student athletes?

The best season I had in high school was when I was having fun. If you’re having fun and you’re running to the best of your abilities and you’re healthy, focus on that this fall. The recruiting can come after. I don’t want anyone to be too stressed their senior year because that could hurt their season. Mostly, focus on the three things I mentioned earlier: being proactive, keeping an open mind and being a good communicator. Those are the three things the senior class this year should take to heart during the recruiting process.

Your Upcoming Race Result May Hang on a Single Word

Train Your Mind With This Psych Hacking Game-Workout

Overcome Your Pre-Race Jitters to Run a Faster 5K

Women Coaching Women: A Winning Combination at the NCAA Championships

Is Every NCAA Distance Record About to Get Smashed?

How ‘Perception of Effort’ Can Make or Break a Race