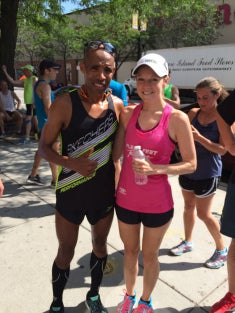 Despite my dogged determination and four separate attempts to gain entry, I was not able to snag a bib to run in the 2017 TCS New York City Marathon. Therefore, on race day, I was forced to assume the role of spectator–and boy, was it THE show to watch. There were so many incredible performances by women, namely Shalane Flanagan’s epic win, the first American woman to do so in 40 years. One of the other legendary components of this race was that it was Meb Keflezighi’s last marathon. Watching Meb’s last career marathon, in which he placed 11th overall, I couldn’t help reflecting on two years ago, when I had the unique opportunity to run with Meb. Fleet Feet Chicago hosted a shake-out run led by Meb. Here are some takeaways from that epic 20-minute run:

Video Thanks Meb Keflezighi, The “Greatest American Runner Of All Time”

Jennifer Lichter is Taking The Mountains By Storm