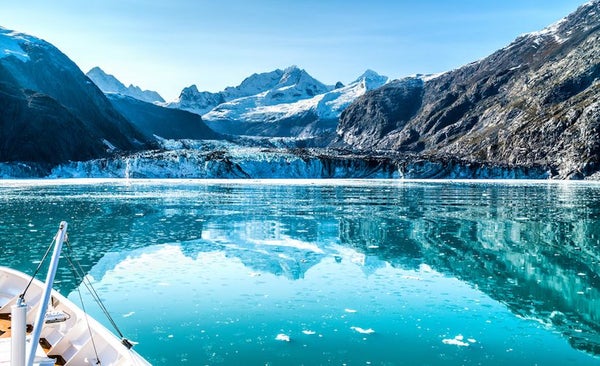 5 Takeaways From Running On A Cruise

On a recent Alaskan cruise to celebrate our second anniversary, my husband Matt and I truly earned our sea legs. Not only did we learn to walk steadily aboard the ship, but we also attempted running at sea; Matt was a bit more successful at the endeavor than I was! Nevertheless, here are five things we discovered while running on a cruise ship.

Related: The Most Gorgeous Alaskan Race You’ll Ever Do

1. It Gets Pretty Topsy-Turvy

Our ship was incredibly unstable during our first full day at sea. It was so turbulent that merely walking from our bed to the bathroom made me feel as though I was in a Halloween fun house. That just so happened to be the first morning that Matt and I went to the gym. After taking some motion-sickness medicine, we walked to the gym, both grasping desperately onto the handrails for dear life. With such a treacherous adventure just getting to the gym, I decided to opt for the elliptical (described in more detail below). Matt was the only person brave (or perhaps stupid?) enough to run on the treadmill that morning (there were a lot of people walking on the treadmills, though!). After our workouts, he described his experience as “just plain awful!” During his entire run, he feared that he would topple right off the treadmill. We learned that when nobody is using the treadmills, there’s likely a good reason why!

As I already mentioned, I felt rather unstable during our days at sea. Therefore, I chose to exercise on the elliptical those days. Although I hadn’t planned on cross-training during our cruise, it was definitely the safest option for me because I could hold onto the machine at all times!

During our workouts, not only were we distracted by the wobbling ship–we were also captivated by the incredible views! On the day that we sailed through Glacier Bay, I wanted to spend the entire day absorbing the scenery. Being able to see the glaciers through the floor-to-ceiling windows of the gym was a fun and unique way to take in the surroundings!

4. There Are Pros And Cons Of Using The Machines

We lucked out, because the gym was fantastic! We both typically do all of our runs outside, so this made the transition to running inside a bit easier. Additionally, there was a plethora of equipment, which meant no waiting to use machines. Our only complaint was that, one morning, Matt’s treadmill had a mind of its own. He programmed a particular pace, and minutes later, the treadmill randomly increased his pace by a full minute; he got some unexpected interval training that day!

5. When You Get A Chance, Go Overboard

Despite our acclimation to running at sea, our favorite part of the trip was going for runs in the towns that we visited. In fact, we discovered that there is often a running path in close proximity to the docks. On days when we were in port, Matt and I both woke up early and ran through the towns. This way, we were able to get the lay of the land and figure out where we wanted to explore a bit more (after our runs, of course)!

6 Tips On Packing Your Running Gear For Vacation

3 Reasons To Stay Active On Vacation

6 Total Devastations (Kind Of) All Runners On Vacation Understand