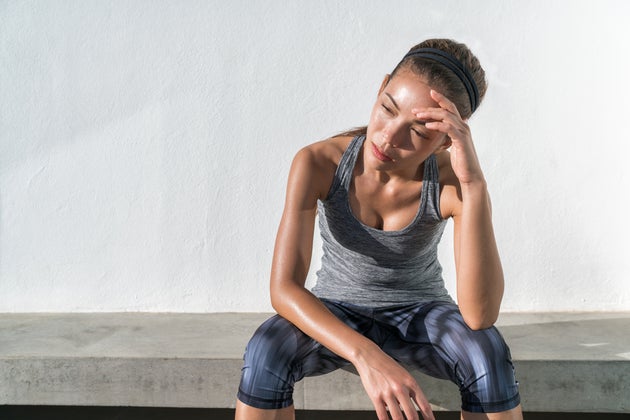 Whenever you toe the start line the intention is to cross the finish. But sometimes for various reasons, we never make it to that finish line. A Did Not Finish (DNF) can be a big disappointment, especially when you think of the hours of training and sacrifices you’ve made to prepare yourself for the race.

Whatever the circumstances of your DNF, you’ll find comfort and insight in the stories of these women:

After just missing a BQ time by 1 minute and 12 seconds, Colleen was out for redemption. “I chose [the race] because it was a good course and I felt like that a BQ plus a two minute buffer was within reach.” After a strong start Colleen started to feel her stomach turn. “My stomach hurt so much I stopped taking gels or Gatorade, but kept guzzling water.” Despite taking in water, Colleen experienced severe dehydration symptoms including swelling hands and back pain. “I stopped at the medical tent at mile 23.5—they wanted to me to get electrolytes right away, but I couldn’t hold the cup.” After receiving medical care Colleen recovered, but still felt the disappointment of the DNF. “I [was] sad,” she says, “but there will be other races…hopefully many other races.”

Melissa unexpectedly DNF’d this past June at a half marathon she was running with her sister and friend. “I followed an adequate half marathon program, started strong and even had on a black and purple tutu, but at mile 6 something painful happened.”

It turns out Melissa had broken one of the metatarsals in her foot and hobbled to an aid station where she received a ride from the paramedics to the finish line so she could meet up with her sister and friend who had finished. Melissa says she was bitter at first, but now looks at her injury and DNF as a learning lesson. While she waits for her foot to heal, Melissa has been cross training to stay in shape.

“I wish it had ended differently,” she says. “But what what can ya do?”

Fighting a head and chest cold, Heather decided to tackle the Wild Half Marathon in New Jersey with her PR in mind. “It was super hot and humid and I couldn’t breathe through my nose. After walking mile 11, I stumbled off and grabbed the arm of a police officer.” With the finish line in sight, Heather was checked out by the paramedics and then helped to her car by her husband. Later she tried to celebrate with her sisters and brothers-in-law, who had finished the race. “I was trying to put on a brave face, but I was really bummed.” Later that year Heather went back to the course. “I ran by the place where I stumbled off the course and committed myself to coming back and conquering that race.”

Self-described as a “back-of-the-pack” runner, Linda was tackling a 50K race which she had prepared well for. “I wasn’t expecting it to happen and certainly not when it did,” Linda says of being pulled off the course due to the race cut-off time, only three miles from the finish. “I definitely underestimated the difficulty of the course.” Linda described that moment as “disheartening,” especially when asked by family and friends about the race and having to tell them she fell short of her goal. But she feels like she has learned a valuable lesson. “A DNF does not define you or place any limit on your abilities to reach new goals.”

An Honest Mistake or Blatant Sexism? A Tale of One Woman’s Turkey Trot Win