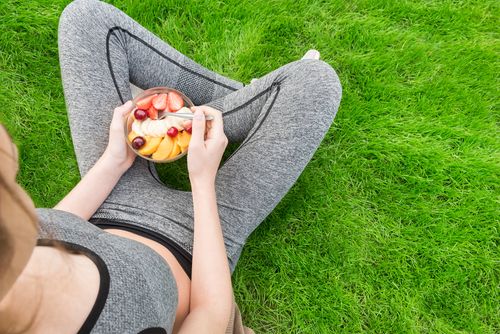 One of the first things Jamie Sheahan said about her marathon a month eating plan was how “nutrition is almost more important than training.” Not an unexpected quote coming from a dietician but, this particular one has run a marathon or ultra a month for over a year so she kinda knows what she’s talking about. “It’s like packing the car, having a plan of where you’re going but putting gas in the tank.”

I spoke with Sheahan, who is the Director of Nutrition at EdgeVT in South Burlington, Vt., about her epic undertaking, how it started and basically why it continues. Her focus on fuel is at the center of her non-stop journey of 26.2 and beyond, the planning of which relies heavily on Yelp. “Seriously, Yelp is a miracle.”

How did you start, and was it a conscious decision or did it kind of just happen?

I set out to do six marathons in six months, just wanting a new challenge and I figured six months because that’s when marathon season dies down (if you start in May, which she did) and that’s when I thought I would need a break.

I lined up races that fell in a good order and places I could drive to or plan around other events. I ran a marathon in North Carolina since I was there for a wedding and my parents live in Florida so that was a less expensive destination.

I ended up surprising myself with improving times and it was a great way to stay motivated.

When I first qualified for Boston, that became a goal of a full year of a marathon a month, ending with running the famed Boston marathon in 2017, one full year after I started, but then I just kept going and I’m still going, 15 months later.

How many states have you run in, and how do you plan your meals when you travel?

I have run in 13 states plus Washington D.C. and two in Canada. My favorite was my hometown marathon, The Vermont City Marathon, because the vibe is just so amazing and the crowd support is unreal! It was after that marathon (in May 2017) that I stepped into the trail/ultra world. I’ve done two ultras now and, shockingly I was the first female overall at a race in Kansas City, Kansas. I honestly don’t know how because I still don’t know what I’m doing. I mean I literally still had the tag on my Camelbak (water carrier) and I had never practiced that distance.

As for meal planning, it is the most important thing I do. I research restaurants in the area to see where I can eat, based on Yelp reviews and I haven’t been to a bad restaurant yet thanks to Yelp. Seriously, Yelp is a miracle.

If I can, I try to stay at the hotel sponsored by the race because they are prepared with coffee, bagels and bananas in the early morning. If I know it may be tough to find appropriate food or any food at all, I go to the grocery store and get it the day before.

Post race food is so important especially since I always have another race coming up and I can’t afford to be sore or tired for a week.

Do you have the same pre- and post-race foods?

Pre-race is always the same unless I find a restaurant, and post-race is more how I feel, so I like to have options, and if the post-race spread has more variety than burgers and beer, I will gladly partake.

Banana in the morning and then toast or a bagel. I would love to say I do oatmeal but I can’t plan on having somewhere to heat it up.

I am a GU girl through and through. I know what flavors I like so I rotate them—caffeinated chocolate peanut butter at the beginning, then tri-berry or something fruity and non-caffeinated next and finally, strawberry banana. The choices keep me mentally in the game and I look forward to what I’m going to have next. As for liquids, I mostly just do water but I will have Gatorade if it’s a really hot day and I need the additional electrolytes.

My dream meal is an omelette with toast or scrambled eggs with toast – I like salty and savory after all the sweet. The beauty of the southern states is they have waffles houses galore so no matter when I finish, I can usually get my breakfast meal!

How do you fuel differently for a marathon versus an ultra?

If I was doing 50-milers I would do more whole foods but I’m not and the digestion period is so long, I wouldn’t be using the energy from them anyway. Right now I stick with the gels and I may have a handful of pretzels for the salt but that’s it.

What are the biggest changes you have noticed about your body in terms of weight or muscle?

One of my advantages is I know the fueling and diet side so I’m careful to take enough in. I joke that my grocery bill is similar to a family of four but the haul will only feed me for three days. I buy Costco size amounts of almond butter. I just need to make sure my calories count and, let’s be honest, veggies don’t have a lot of calories so I make meal planning a priority and always have snacks for work.

How can someone start doing a marathon a month?

The big thing is to make sure it’s fun. I’m choosing places I want to go so it’s not just about checking a box. Make it a weekend or something fun to do—be a tourist.

Fueling yourself has to be number one! You’re constantly challenging yourself so you need an anti-inflammatory diet to greatly reduce recovery time.

What is the most important thing you have learned about food?

The day-to-day is the most important. If you’re not getting enough energy in on a daily basis you’re going to get run down so it’s critical to make that a priority.

It takes so much time and energy to train that you may be tempted to put nutrition on the back burner but it should be your number one priority.

I don’t tag food as good or bad because food should be enjoyable and fun. But, for what most people consider an indulgence, mine would have to be Ben and Jerry’s Peanut Butter and Cookie non-dairy ice cream. And I have to have the non-dairy, because dairy I do not get along, but this ice cream is the best ever.

Follow Jamie on her non-stop marathon/ultra racing journey on Instagram @jamie_runvt. She is also available for virtual nutrition consultations. Set up an appointment via email at JamieS at edgevt dot com.

A Half Marathon Training Plan For Every Runner

If You’re Terrible at Eating Breakfast, Here’s How to Get Better (and Why It’s Worth It)