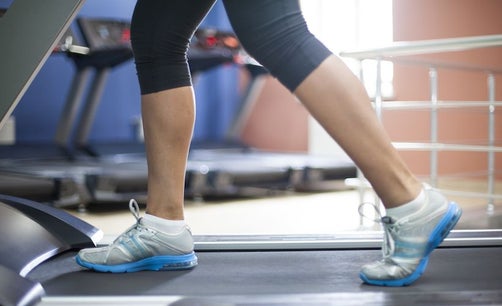 I Needed To Run

When my daughter, our second child, was about 12 weeks old, I decided that I needed to do something (anything) to get off the couch and out of the cheese dip and chips. My kids were 14 months apart and I had no idea what had happened to my thigh gap—just kidding, I never had a thigh gap—but I knew that I had extra everything at that point, thighs included, on my 250-pound frame. I’d had enough, and I wanted to run.

Now, let’s be clear what “I wanted to run” meant. I wanted to run away from life, from my job. To run from my body—which was a strange vessel that I no longer recognized. I didn’t know that motherhood would be such a blessing and such a terrible thing and wonderful thing and hard thing. Really, motherhood was a rollercoaster of emotions that I could not comprehend. Being a working mother was even crazier—how was I to actually mother these kids and do my job and figure out a way to be sane? The questions were fast and furious with no answers in sight.

As I looked down the road at my life, I had no idea how I would keep it together.

So I wanted to run physically, yes. But I also needed to run in so many other ways.

On my way to work one day, I passed one of those 24-hour gyms—the small, strip mall ones that promised anytime access to a full gym—complete with shower and locker. Anytime? I could run at…well, anytime? This is something. I was on to something, I thought in my sleep-deprived mind.

I joined on the spot and could barely contain my excitement of being able to work out anytime. I spent several days without working out any of the time, but one evening I decided to change that. The day had been especially hard. The kids were cranky, my husband was cranky and I was cranky.

My husband looked at me like I had three heads (“What gym?”), and I didn’t care. I needed to run. I was going to run! How exciting this is!

I found some old tennis shoes. I stuffed my body into some leggings and an old tee, and off I went. I had my iPod ready, and I put on some motivation beats and prepared for the amazing run that was inevitable.

As I walked up to the treadmill, I looked around. The gym was completely empty. I liked that. I didn’t want anyone to see me running. I felt a sense of peace about the whole situation. I was going to run.

I pressed GO, and I started to walk and then jog. I increased the pace to 4.0 and I started to run. Immediately I knew I had made an error of epic proportions. I was not a runner, and this was not running. This was an elephant stomping on a belt. This was a nightmare. This was so much fat and boobs flying around. Why were my boobs hurting? Did I just drool out of my mouth?

Two minutes. Three minutes. I was sweating and heaving and huffing. How did this happen? What has happened to me? Why can’t I run? I need to run!

Five minutes. Is this a cardiac event? I am not going to make it.

I continued until I truly could go no further. After eight minutes, I stopped the belt. I pulled off my headphones and threw them on the floor. I looked in the mirror, and I couldn’t believe how much I hurt. I hurt on the outside, but even more, I ached with a pain and sadness inside that I could not explain.

Everything hurt. My eyes filled with tears, but I refused to let them fall. This was my fault. I had to fix whatever this was.

The next day, my feet hurt. I looked at the bottoms and had visible bruises on the balls of my feet.

I didn’t know what was happening. I knew bruises weren’t good. I knew I was not a good runner. I knew that I had no idea what to do.

But I also knew, in that moment, that I was better than that run. I had more inside of me than the bruises on my feet. I knew that I needed to run, even if it was off to a rocky start.

So I decided to keep going.

Meredith Atwood (@SwimBikeMom) is a weekly contributor to Women’s Running. She is a four-time IRONMAN triathlete, recovering attorney, motivational speaker and author of Triathlon for the Every Woman. You can download a free copy of the book here. Meredith is the host of the hit podcast The Same 24 Hours, a show which interviews interesting people who make the best of the 24 hours in each day. Meredith lives in Atlanta, Ga. with her husband and two children, and writes about all things at SwimBikeMom.com.

I’m A New Runner; Is It Always This Hard?

The Secret To Enjoying The Struggle Of Being A New Runner