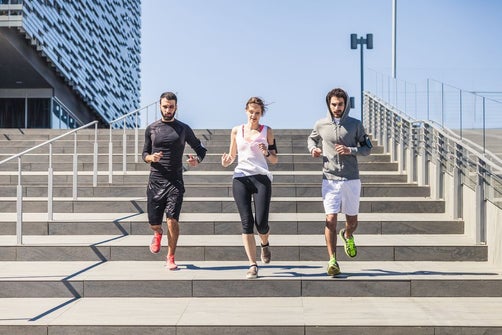 Running With My Brother

As much as I grumble about it, growing up as the middle child had its perks. For one, I always had a playmate. If my older brother was off doing a big kid activity, I could wrangle the little one into whatever I wanted to do—in theory. But somewhere along the way, we all grew up. And now my little brother towers over me.

My not-so-little brother is headed off to college next week. Wow, did that come quickly or what? Amidst the craziness of our semi-adult lives, we were able to escape to Canada for a few weeks this summer, and I was itching for the chance to run with the dude who never wants to run with me.

Related: Why The Bond Between Running Buddies Is So Special

I’m the definition of a morning person. Seven a.m. runs are ideal. Five a.m.? Well, okay–sure! My brother, Matt, is the complete opposite. He finds midnight runs invigorating, preferring to pound out the miles while I’m fast asleep. That being said, the kid is no slacker. He’ll run when it suits him. During vacation, it suited him (most days) to run with me, his big sister.

Here’s the thing: I’m very high strung. My little brother, not so much. And I think that’s one of the neat qualities about him.

I’m a very lucky girl. I have two brothers who are both first-class gentlemen and first-class adventurers. Plus, they’re both runners. The unfortunate caveat is, they don’t typically want to run with me. I’m the sister. I get that, but I ask anyway. And I love it when my little brother (is 19 still considered “little”?) says “yes” to my incessant pleading. I enjoy running with people, and in all honesty, I really love running with my brother. While I’m Type A and high strung, Matt has an ease about him. It’s something I admire, and it’s come to my aid more than once while running.

Take last month, for example. We were both anticipating our family vacation to the Canadian Rockies, ready to hike—and run—the trails. We’re from Ohio, the land of docile deer and Ohio State fans. Alberta, Canada, is the land of bears and elk and emptiness that stretches for miles. It was incredible–and humbling. Per Mom’s instructions, if I wanted to run out on the trails, I had to have Matt and a can of bear spray with me. Thus began our Canadian adventure.

Related: Seven Summer Destinations For The Active Traveler’s Every Fancy

While Matt views 11 p.m. as a prime running time, I view it as the prime time to catch up on my REM sleep. But vacations and holidays tend to ease us out of our routines. Matt and I have run up mountains against the backdrop of Caribbean sunsets and through neighborhoods while listening to the soft sound of falling Christmas snow. Running in bear territory, however, was new. So we set off on the first day, overly cautious and eagerly optimistic. I apologized numerous times for our slow pace. I was coming off a minor injury and even my normal pace, I knew, was slow for him. But he brushed it off and ran along the forest’s edge.

“Just so we’re clear,” I laughed, “if we see a bear, we’re not actually telling Mom. She’ll freak!” Matt turned, saying, “And who’s to say I won’t let the bear eat you and just sprint off?” I gave him a light jab in the arm and we ran onward. But I realized something in that moment. I had no doubt that if a bear charged onto the trail, Matt would protect me.

That’s just who he is. And the more I run with Matt, the more I admire the man that my brother is becoming. Bear or no bear, he’s loyal to the end. The more I run with him, the more I want to grow in those same qualities. We didn’t see any bears during that vacation, but it was memorable nonetheless. The running was incredible, the scenery was breathtaking and my brother was a faithful (albeit snarky) companion every step of the way.

Real Runners: She’s Doing An Ironman For Her Mother

Pacing My Partner Through A Marathon Taught Me These Things

Who Makes The Best Type Of Running Buddy?