The night before the Chicago Marathon, I was a nervous wreck. I spent the majority of dinner avoiding eye contact and fighting back tears whenever anyone asked me why I was so quiet. It was hilarious and weird. Here I was, getting ready to run my sixth marathon, and I felt like the weight of the world was on my shoulders.

I am not an elite athlete. My future was not riding on my performance the next day. But I was invested. I’d fought for six months through self doubt and self-imposed limitations to prove to myself that I was strong and capable of qualifying for the Boston Marathon. It was an accomplishment I never thought I’d aspire towards.

If there’s one thing I know to be true, it’s that I need a terrifying and seemingly impossible goal to silence my inner critic and prove to myself that I’m stronger than I give myself credit for. After I ran my first marathon, I promised myself that I was going to attempt to do anything I told myself I wasn’t capable of. This April, after watching my friends run the Boston Marathon, I found myself saying that I’d never be able to time-qualify for the Boston Marathon (BQ). I wasn’t intentionally setting myself up for a BQ attempt; I really didn’t believe I was capable of shaving 25 minutes off of my marathon time to qualify.

I felt embarrassed that I didn’t think I could take myself seriously enough to stick to a training plan and make a BQ happen. Just coming up with excuses as to why I didn’t want to try was exhausting, and the truth of the matter is, I didn’t think I could do it. I was afraid of having to live with myself when I failed.

But here’s a spoiler alert: the entire experience was nothing like I thought it was going to be. I went into it ready to suffer—don’t get me wrong, I did A LOT of suffering. But I learned incredibly valuable lessons throughout the process.

Suffering can only happen when you allow it to happen.

This gem came from Dr. Bob. He asked me to make the conscious decision not to suffer whenever I went out for a run. He told me to omit “have to” from my vocabulary and replace it with “get to”. It changed how I felt about training and I started to kind of understand what people mean when they say “embrace the pain.” (OKAY, KIND OF. I still don’t understand how anyone actually embraces pain. I’m okay with it. We can be in the same room and not fight Real Housewives style, but I’m not stoked to see it at my party, if that makes sense. Definitely not hugging friends.)

I stopped defining what I was and wasn’t capable of.

I’d see goal paces in my training plan, panic, and decide that I wouldn’t be able to do what my coach wanted me to do.

Dr. Bob helped me change how I talked about myself. When I saw an intimidating workout, he asked me to say, “I’m going to go for it and see what happens.” It changed everything. Even when I didn’t hit my prescribed paces, I knew what it felt like to give it my all, and I didn’t feel like a total failure when I was done. Instead, I felt proud and hopeful.

No regrets, no excuses.

Failure and self doubt became driving forces the closer we got to race day. I was putting in the work my coach Josh Maio gave me, and it was becoming evident that a BQ may actually happen. But in my harder races or workouts, I’d give up on myself whenever I got too close to my pain threshold. Instead of leaning into it and seeing how far I could go, I’d panic and tell myself I couldn’t do it.

Dr. Bob introduced me to my new mantra: “No regrets, no excuses.” He told me to let go of what my expectations were and to just go for my personal best. I started running and living my life with a new outlook. I wasn’t holding back anymore, because finishing and falling short knowing that I gave everything I had felt so much better than how I felt when I pulled back. The doubts were there, but they were easier to run down when I knew I was giving 100 percent.

Fast forward to race day. Even though I was nervous, I had my plan, my team, and I was ready to leave everything on the course and do my best.

The first half of the race flew by, but at mile 13, I started dwelling on the fact that I was only halfway there and that in order to BQ, I had to start getting faster. The hardest part of the day wasn’t the fatigue or the pain, it was having to fight my way out of the self doubt. Whenever I felt like I was too uncomfortable, I’d pull back. Then I’d catch myself, tell myself no regrets, no excuses, and fight my way back towards my personal best. But it was a struggle. I knew I wasn’t going to BQ around mile 20, and for a second, I asked myself if I wanted to just get comfortable and finish the race. I was going to PR whether I kept fighting or pulled back. Then, another runner ran up beside me. She introduced herself and told me that I had motivated her to attempt her own BQ. She looked strong, and with the biggest smile I’ve ever seen on a runner at mile 20 of a marathon, she told me that she was on track to BQ. She asked me how I was feeling. I told her I was struggling, and she told me she believed in me. That we were in it together. She screamed, “no regrets, no excuses,” over her shoulder and left me alone, choking back tears and a desire to hug every single runner and spectator in sight.

You are not a quitter. No regrets, no excuses. You are Beyonce.

That’s what I repeated to myself until I got to the final mile. There, I saw a sign that said “Run, Selfie, Repeat,” and struggled to make out who was holding it. It was my Aunt and Dr. Bob. I was stunned. I didn’t know they were going to be there. I didn’t know what to do, and he could see that on my face. So Dr. Bob screamed, “DON’T YOU STOP! NO REGRETS, NO EXCUSES. KICK IT IN! GIVE IT EVERYTHING YOU HAVE! YOU’RE ALMOST DONE.” 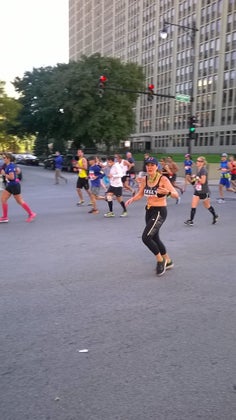 And that’s exactly what I did.

I accelerated. I was hugging the left side of the street and I was passing hundreds of people. I went from an 8:45 mile down to a 7:45 mile. I heard spectators say things like, “Look how fast she’s going!” and “Did she even run the marathon?” I started to wonder how long I could hold on, but whenever I thought I’d get tired, I found more energy. Don’t get me wrong, it hurt like hell, but the only way I was going to cross the finish line was knowing that I gave my personal best, and that meant emptying my tank and proving to myself that I am not a quitter. 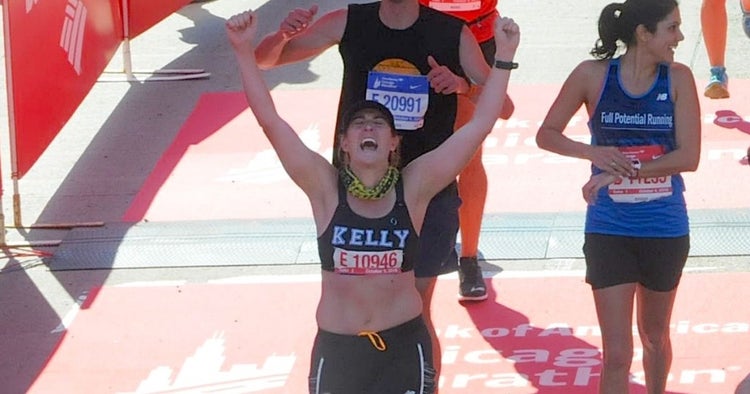 I crossed the finish line in 3 hours, 41 minutes, 9 seconds, an 18-minute-and-28-second personal best. I didn’t hit my goal or run a Boston Marathon qualifying time, and I grabbed two Goose Island beers, ready for the moment when the wave of disappointment would wash over me. But it never came. I felt like I won. I couldn’t believe that I pushed through the doubts I experienced for much of the race, and finished as strong as I did. I knew that I gave it everything I had, and I was left with dead legs and an overwhelming sense of accomplishment and pride. (Okay, and shock. There was some shock happening. I couldn’t believe I stuck with my training plan and that I actually chose to embrace pain.)

Seemingly impossible goals are important, because they push us outside of our comfort zones and help us understand just how strong and capable we really are. But there’s a very real possibility that you may not accomplish exactly what you set out to do. Maybe it’s in your personal life, your professional life, or maybe it’s a specific time goal like breaking two hours in a half marathon. Whatever your goal, I truly believe that the only way you’ll actually fail is if you don’t try and give it your best effort. No regrets, no excuses isn’t easy, and I’m willing to bet that the majority of your days will be difficult.

But you can’t let your pre-defined limits, a fear of failure, or a fear of looking stupid stop you from trying. Throw ‘can’ and ‘can’t’ out the window, and see what’s actually possible if you just show up, say, “yes,” and give 100 percent. I promise that if you give your personal best every single day, and make the conscious decision to embrace whatever comes your way, you’ll walk away feeling like a champion. And it just might change your life.

Okay, it will almost definitely change your life.

What impossible goal will you chase down in 2017?

I plan to BQ at the 2017 Virgin Money London Marathon.