5K. The distance that somehow became an entry level distance that gets overshadowed by the half and full marathon. WHY? The 5K is the perfect distance! A distance just far enough that if you push yourself to that evil painful place, you just might fall apart before even crossing the finish line. Or if you’re just getting started, 5K is just far enough to make you feel like a total badass!

But regardless of whether you’re looking to run faster and stronger or if you’re trying to become a runner, it’s safe to say that the entire ordeal is a hell of a lot easier and more enjoyable when you have the support of a #BadassLadyGang.

Badass Lady Gang: (noun) A sisterhood of women (and super groovy men) who aren’t afraid to push one another, and themselves, to be the best they can be while having the best time doing it.

When Women’s Running came to me with the idea of including a training plan with my cover, I told them that I wanted to do something different. I wanted to create not one, but two training plans. The first training plan, run your strongest 5K, is for runners who are looking to build speed, strength, and badassery in just 4 weeks. But I didn’t just want to give strong runners a way to get stronger. I want those same runners to give the transformative and empowering gift of running to the women in their lives who don’t yet run. From your mom, sister, aunt, cousin, best friend, frenemy, grandmother, mortal enemy, boss, co-worker, local bus driver, teacher, mentor or a stranger they meet on the subway, I want you to encourage your #BadassLadyGang who doesn’t run to join the 5K as well.

Because becoming a runner is really, really, really hard but when you have the support of your #BadassLadyGang, anything is possible!

So if this is your first time, choose the “beginner 5K plan”. (And wear the beginner label like a badge of honor. You’re a badass for doing this!) And if you’ve been running for a while, choose the “your strongest 5K plan.” Then set a goal that scares the crap out of you!

Sound good? YOU IN? AWESOME! HERE WE GO.

I’m going to rip this off like a bandaid, this is going to be painful. BUT YOU ARE A BADASS AND YOU CAN DO THIS!
YES?
YES! 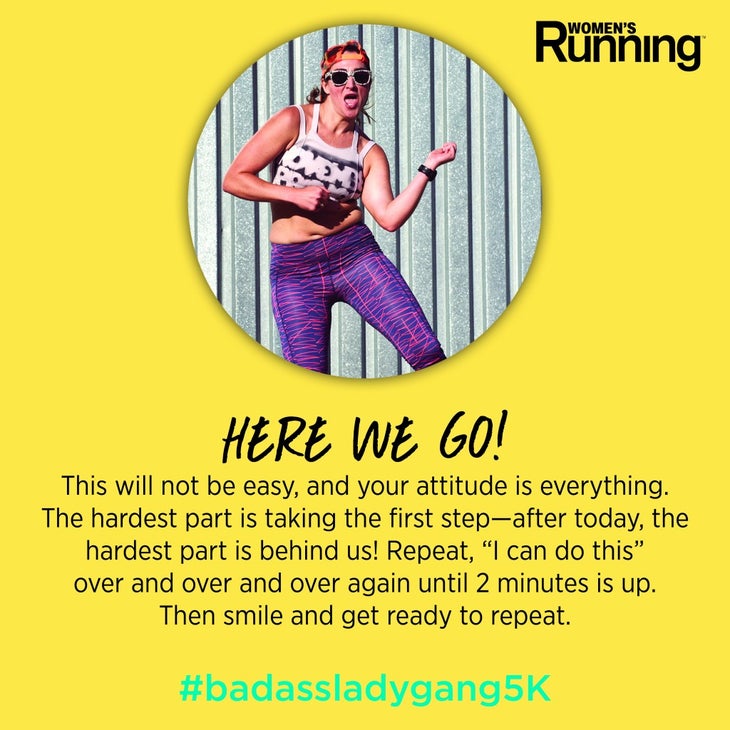 The trick to getting started is to plan ahead, especially if your schedule is unpredictable. Go grab a calendar and pencil in the times when you know you can get your run in. If your afternoons and nights are impossible, run first thing in the morning. Not a morning person? No one is! (OK, some people willingly wake up really early. But most morning people aren’t morning people. We just force ourselves to get up early.) Try laying out your clothes and shoes before going to bed. Then, when your alarm goes off, get out of bed AS FAST AS YOU CAN and get moving. The sooner you can get out of bed, the more likely you’ll get that run in.

Otherwise, squeeze in your run post work or on your lunch break. But pencil them into your calendar and treat it like an appointment that can’t be canceled. Make it a priority. This training plan is only 4 weeks of your life.

Otherwise, focus on the moment you’re in. When everything hurts and you feel like dying, just keep telling yourself, “I can do hard things. I am a badass.” Because you can and you are. Don’t give up. Week 1 will be over before you know it! Keep your eyes on the prize!

First things first, let’s talk about your goal. I’m not going to tell you how to live your life, but this is an excellent opportunity to push yourself outside of your comfort zone. Take “can” and “can’t” and THROW THEM OUT THE WINDOW! Set a goal that really, truly makes you nervous. Your goal over the next 4 weeks is to see what you’re capable of when you give 100%. So, take a look at this pace chart and set a goal that makes your heart skip a beat.

The point of the speedwork is to slowly introduce paces that will eventually become your new easy pace. Try not to panic when you see paces that you don’t think you’re capable of hitting. Make the conscious decision not to suffer. The world isn’t going to end if you don’t hit your paces. All that matters is that you say to yourself, “I don’t know if I can do this, but I’m going to try”. Then force a smile on your face and see what happens!

The only way you’ll fail is if you fail to try, right? Alright, week 1! Let’s do this!