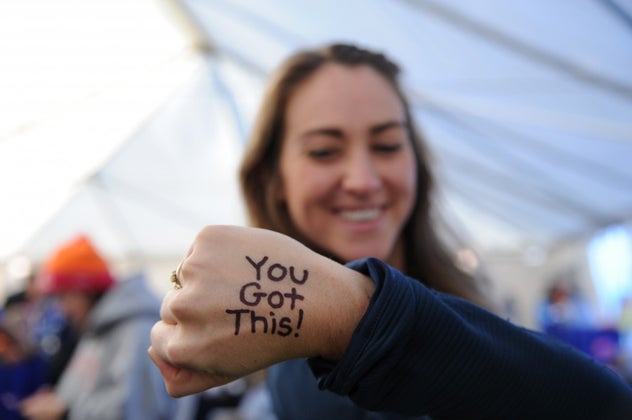 Why is it so hard to believe in ourselves? Or why is it that despite the fact that we’ve put in weeks or months of hard work that we can convince ourselves that we aren’t ready on the drop of a dime?

Race day is supposed to be our victory lap. The day when we get to prove to ourselves that we’re capable of more than we ever imagined. So why is it that despite the fact that we’ve sacrificed our time and fought our doubts and pre-defined limits for weeks that it’s so easy to give in to the fear that says that we aren’t strong enough to get to the finish line?

Why is it so hard to simply believe in ourselves? Why is it so much easier to go from I worked my ass off to be here to I can’t do this?

Last week, I spoke with my sports psychologist, Dr. Robert Corb (a.k.a. Dr. Bob), and he explained to me the concept of loss aversion. That it’s easier to envision and remember our failures, losses, mistakes and pain than it is to envision our wins, personal bests and breakthroughs, because it’s a survival tactic. But just because it’s easier to imagine every single worst case scenario doesn’t mean that we should. In fact, if there’s one thing you shouldn’t do, it’s focus on what could go wrong.

Can you prepare yourself for possible race-day speed bumps? Yes. Should you spend all your time convincing yourself that anything that can go wrong will go wrong? Absolutely not.

If there’s one thing you can expect, it’s that there will be a significant amount of discomfort and pain when you run your heart out. You can’t outrun it. I can always count on the fact that miles 13-18 of a marathon will be a fight to trust that I won’t quit on myself when the pain and doubts are louder than my will to succeed.

So taking the time to imagine that exact moment, when I start searching for a reason to slow down, walk, or find a way to alleviate some of the pain, helps me put the self doubt in check on race day and stay present.

It’s taken me almost four and a half years to understand just what people mean when they say to “embrace pain.” Until now, I’ve always dreaded it and I didn’t understand how anyone could do anything but dread it. I know that pain is unavoidable but whenever I find myself deep in the pain cave, I struggle to find the joy in it. It sounds almost ludicrous, that joy can live harmoniously with pain and suffering. But it can.

We’re all running for something. Whether it’s for your own personal sanity or liberation, it’s no secret that setting a goal to run a distance or finish in a time that you don’t think you’re capable of will change your life. It’s empowering. But to get to the finish line, you have to find a way to embrace the pain.

If that means being able to be in the same room with it, that works. It takes time to learn to embrace it. But the more familiar you are with it, the less powerless you’ll feel when everything hurts and you feel like you’re dying on race day. All you have to do is make the conscious decision to welcome it with a huge smile and open embrace.

Think of pain like that one family member that drives you insane but you can’t imagine your life without them. Sure it’s hard to give them a hug when you want to strangle them, but you do it anyways because you love them.

Okay, so that isn’t the greatest example. But you get what I’m trying to say, right? Okay, let’s try this, visualize yourself halfway through a race, struggling to keep fighting. You’re right on track to running your personal best but your legs feel heavy and you are fighting the urge to pull back. Now imagine yourself, looking like a badass, moving in slow motion, crazy inspirational music blaring, Beyoncé hair flowing in the wind and then you heroically drop kick pain in its evil little face. Is that a better example? No? Alright. Just forget it. Let’s move on…

This weekend, I’m toeing the line of the London Marathon where I’ll go for my second Boston Marathon qualifying attempt. Last year, I set a goal to try to take my marathon time from 3 hours and 59 minutes (a feat that felt truly impossible until I crossed that finish line) down to 3 hours and 35 minutes. I was convinced that I’d quit on myself a few months in and end up writing a piece about how I was proud I had the courage to try but running fast just wasn’t for me. And over the last 12 months, I wanted to quit more times than I can count, but trying to BQ was never just about getting faster. It was about proving to myself that anything is possible if I’m willing to work my ass off.

It hasn’t been easy. It’s been physically and mentally exhausting and the pre-race fear I’m experiencing right now is off the charts. I know this Sunday is going to hurt but what I’m afraid of most is that I’ll give up on myself mid race.

So here’s what I’m doing: Dr. Bob suggested I write down a list of facts of all the achievements, breakthroughs and workouts I’ve completed training for this race. (The feat that sits on top of my list is that after I didn’t BQ in Chicago, I decided to try again.) And now I’m focusing on why I wanted to run down this impossible goal in the first place.

I like to be a big fish in a small pond. I like to feel like I have control over what I’m doing. And when that happens, I stop growing.

It isn’t easy to consistently challenge yourself to step outside of your comfort zone because failure is inevitable. But I don’t want to survive, I want to thrive. It’s so easy to take life for granted. To want to hide from the goals that scare the crap out of you or convince everyone around you that everything is perfect.

Life’s messy, just like a marathon. It never goes as planned and I really need that reminder that I’m stronger than my doubts and my fears.

So here’s my advice to anyone struggling with pre-race fear: redefine what success looks like to you. One of the reasons I really love the idea of no regrets, no excuses (a gift from Dr. Bob) is that it takes the pressure off of an intimidating distance or time goal. When you give everything you have each and every moment, regardless of what the clock says when you get to the finish line, there’s no way you can fail.

Finally, focus on the moment you’re in. There will be moments in your training and during the race where you’ll doubt how badly you want it. That’s normal. Sometimes, making the decision not to give up is a win. Other times, telling that voice that says that it’s not worth the pain to shut the hell up is a win. Give 100% of yourself each and every moment.

Fear is natural. Personally, I think it’s a beautiful indication that you care and that you’re invested in yourself. So, just like we do with pain, find a way to embrace it. Easier said than done, right? Absolutely. But I’m drowning in the pre-race fear right there with you. But that fight isn’t a lost cause.

Running isn’t impossible, it just isn’t easy. It may have taken a few years, but I finally starting to believe in myself. So fear, take a backseat because I’m taking the wheel. No regrets, no excuses. I’ll see you at the starting line.