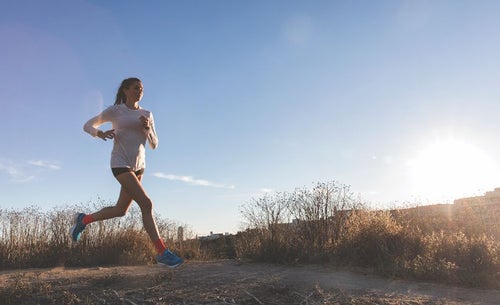 The simplicity of running is part of the sport’s appeal. All it takes is putting one foot in front of the other, right?

While there is plenty of research to back up the fact that bipedalism is innate and that we evolved to run, many of us still manage to make mistakes when it comes to the fundamentals of form. As it turns out, this is one of the major reasons for the high injury statistics among runners.

One of the keys to healthy and successful running is understanding your own unique physiology and tailoring adjustments based on that data. Rather than launching a dramatic overhaul of your form, it’s about tweaking small things in your stride to boost running efficiency, which often has a protective effect in terms of injuries.

“Most people run ‘okay’ or ‘pretty good,’” explains Joe Uhan, a physical therapist and USA Track and Field–certified coach who does remote video running analysis and stride coaching. “Thus, changing everything can be both unnecessary and frustrating. It’s important to know one’s individual needs.”

Perhaps the best way to gain an understanding of those needs is to consult an expert who can do a gait analysis. Physical therapists and coaches who are trained in the art of running mechanics, like Uhan, can help you zero in on specific elements that need adjusting.

With that said, there are a number of universal truths when it comes to running form. While it’s important not to obsess over these things, having a good understanding of the fundamental mechanics of an efficient stride can help a runner achieve good body awareness as she begins to rack up miles over weeks, months and years. Particularly if you’re new to running, developing good habits early on will help you skirt issues down the road.

There Is No One “Right” Footstrike

There’s been much debate over the years as to whether it’s best for runners to land on their forefoot, midfoot or heel. To be sure, there’s research that suggests that heel striking can be hard on the knees and other evidence that shows that striking up closer to the forefoot can strain the lower leg.

“I advise all my sprinters to land contacting the forefoot, but everyone else can take their choice,” says Dr. Stephen Pribut, a Washington, D.C.–based podiatrist who is recognized for his expertise in running biomechanics. “The latest research is quite mixed, but the overall conclusion is that forefoot landing does not lessen injuries, but it may change them.”

If he had to pick an ideal footstrike, Dr. Pribut recommends landing midfoot. But there’s a caveat: “If you have run for many years without injury, I would recommend against drastic changes.” It’s the old “if it ain’t broke, don’t fix it” advice.

You Will Probably Benefit From Increasing Your Cadence

When proper running cadence is discussed, 180 steps per minute is often referenced. This magic number originated from research done by famed running coach Jack Daniels when he observed runners at the 1984 Olympics. Nearly every one of these elite runners had a stride rate of 180 or faster. He also took note that the recreational athletes he worked with landed somewhere between 150 and 170 times per minute.

So what is the significance of cadence?

“More strikes per minute is generally a good thing to train for because it will help reduce impact shock and any tendency toward overstriding,” Pribut says.

Stefanie Heyser, a USA Track and Field–certified coach, licensed athletic trainer and NASM-certified personal trainer, echoed that point, saying, “While you don’t need to hit 180 steps per minute, a faster cadence is good because it means you’ll land closer to your center of gravity, rather than overstriding and braking on your heels with a straight leg out in front of your body—that’s where injury can occur.”

To check your cadence, try counting your steps for 60 seconds while you’re out on a run. If you’re on the slower end, Heyser recommends downloading a metronome app and using it during high-intensity workouts to train a quicker stride rate.

Related: The Myth Of The Ideal Running Cadence

Barefoot Drills Can Be Good For Some Runners, But Not All

While the barefoot boom and interest in running unshod have waned, their impact on running shoe design remains. The shoes of today are lighter and less bulky with lower heel heights than the sneakers of a decade ago. What’s more, the thought that barefoot running may strengthen the feet in important ways has also remained, at least for some runners.

“There will be some people who do better running with shoes and avoiding barefoot running, and there may be others who enjoy and perhaps benefit from barefoot strides,” Pribut says. “It’s important to go with what works for you as an individual.”

Put simply, if you want to try doing some barefoot running, limit it to a few rounds of 50–100-meter strides done barefoot (or wearing minimalist footwear) on a football field or soft surface following a workout. Rather than running any significant mileage barefoot, treat barefoot strides as a drill that can help support your regular training. As Pribut alluded to, this won’t provide benefit to every runner, so be sure to listen to your body and back off if you notice resulting pain or discomfort.

If barefoot strides aren’t your jam, toe yoga provides a no-impact option for strengthening your feet. By fortifying the tiny muscles in the foot, you make way for a more stable landing when you run.

“I like intrinsic strengthening exercises for the foot and have recommended some of these exercises for many years,” Pribut says.

These exercises can involve simple drills like standing and practicing lifting your big toes while leaving the rest of your toes flat on the ground or spreading your toes apart, flexing and stretching them. While Pribut says that some of the toe yoga exercises promoted on YouTube aren’t useful or safe, others, like the ones mentioned above, may prove beneficial.

For years the myth that a runner should land directly below her hips or center of mass persisted. As it turns out, that’s not only tough to do, but it would also be detrimental to your stride.

“Landing slightly in front of the hips—just beyond the center of mass—is what creates the requisite impact force that is used to ‘bounce forward,’” Uhan explains. “Conversely, if we landed perfectly under the hips, there’d be no forward propulsion.”

Since efficient running involves optimizing ground reaction forces by absorbing shock when landing and making the most out of propulsive forces when pushing off the ground, it makes sense to land just slightly in front of your hips. Fortunately, this is second nature for most runners.

Related: Why One Runner Fixed Her Dreaded “Heel Strike”

Striking the ground in the most optimal place is largely dependent on your posture and body alignment. A slight forward lean works with gravitational forces all while promoting efficient footstrike.

“The cues I use with runners are: Lean forward from the ankles with your shoulder blades somewhat pinched together and slightly down and back with your chest up,” Heyser says.

While this sounds simple enough, the fact that many of us sit hunched in front of a computer all day can make it challenging. Running hunched, too upright or bending from the waist (rather than the ankles) are some of the most common postural mistakes runners make.

If you’re having trouble striking the right pose, Heyser suggests working on posture while running hills or stairs. She explained by saying, “In these types of workouts you tend to lift your knees more, lean forward from your ankles into the hill and keep your chest up.”

Distance runners are often guilty of disregarding the importance of upper-body strength and form. Indeed, the body is an intricate kinetic chain with all of the moving parts working together to propel you forward.

“The arms should mimic the legs,” Uhan says. “They should swing compactly—around 90 degrees for endurance running—and with a small but predominantly rearward motion.”

By this, he means that your arms should be swinging front to back—not across your body—although you will still get a small amount of rotation, which is normal. You should also avoid tensing your shoulders and holding your arms motionless at your sides.

“I tell runners to keep their shoulders and jaw relaxed and drive their elbows back,” adds Heyser. “Gravity will take care of the rest.”

You Should Breathe From Both Your Nose And Mouth

While there’s much focus on breathing techniques in yoga and meditation, in running, it’s all about getting in as much oxygen as possible. As such, rather than breathing in through the nose and out through the mouth, as the aforementioned activities sometimes call you to do, be sure to take in air through your nose and mouth when you’re running.

“I tell runners to just keep their jaw relaxed and not to overthink it too much,” Heyser says. “The biggest issue I see is runners not taking a big enough exhale…to prevent shallow breathing. That of course can lead to shortness of breath, hiking your shoulders to compensate, et cetera, because you won’t be able to breathe in enough air if you aren’t taking enough of an exhale.” In those cases, she has her runners count to two or three as they exhale.

Related: 7 Steps To Breathe Easier On The Run

If there’s one piece of advice you’re going to follow, let it be this: Run relaxed. Tension in any part of the body almost guarantees inefficiencies in your stride. To combat this, Heyser recommends practicing good body awareness.

“If you’re able to even just acknowledge where your tension is resting, that can help you relax,” she explains. “It really helps to start by relaxing your jaw and making sure your shoulders are down and back a bit.”

This mindful awareness of your body can help combat any stress you might be carrying into your run from other parts of your life, which can interfere with effective and healthy form. It’s all about listening to your body and approaching the run with a sense of controlled ease.

Running Rewired Excerpt: What Your Body Feels Like When You Run