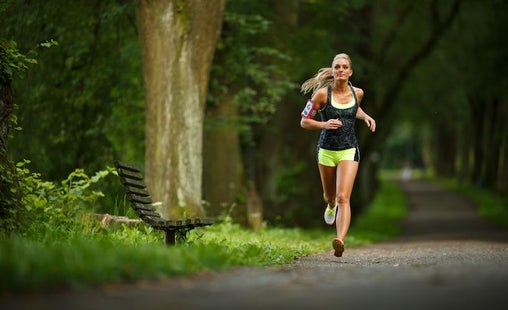 Even though my first official run as an adult-onset runner was terrible, I grew to love the treadmill. I liked that the treadmill existed only inside—in the air conditioning. I liked to hide in the corner. I liked to brood and look in the mirror and blame myself for all my past mistakes. I liked allowing my inner mean girl (Gladys is her name) to really sink her fangs into my psyche:  You’re so fat. Why are you running? You look like someone put a heap of basketballs in a burlap sack and bounced it on a trampoline.

Gladys is a really funny one, that girl.  She’s not a joyful gal for having glad in her name.

Seasoned runners often talk about how much they hate the “dreadmill,” but for the ridiculous aforementioned reasons, I didn’t mind being in the gym, in the corner where no one could see me huffing and puffing and near certain-death.

Running outside? That was the greater challenge for me as a new runner. I could not fathom how to make the transition from inside the gym cocoon to the outside where people would see me. Where people might say mean things that affirmed Gladys’ evil words.

Like most things I dread—the dentist, pap smears and parent-teacher conferences—I took the tactical skills I possessed and applied them to running outside.

First, just because I didn’t like something did not mean that I would hate it forever. This is a terrible analogy, but I really didn’t like my husband when I first met him. He was very know-it-all and liked to assert his smarts to me. Turns out, I married the guy and his smarts are now one of the things I treasure most about him. So at some point, things can change.

Running outside was no different in that regard. I knew that I had to give it a chance, and another. I also knew that so many people were into this running thing—millions of people couldn’t be crazy, could they?

Next, I acknowledged that my fear of running in public had little to do with running. If I went outside and someone confirmed that I was all the things Gladys said I was, then what? The fear holding me back was feeling. I did not want to feel the raw emotions and internal pain that went so deep. I wanted to avoid that pain.

I might as well have gone to the beach and dug an emotional hole to China, but I knew that the only way through the fear was through it.

The only way to get through the fear was to run right to it.

On my first outside run, I took all the backroads I could find.

I didn’t go far, but I went. No one cared that I was running; no one said an unkind word to me while hanging out of their car window.

While that would not always be the case, for that one day I survived enough to know that I could do it again. And that was all I needed on that day, in that moment.

Meredith Atwood (@SwimBikeMom) is a weekly contributor to Women’s Running. She is a four-time IRONMAN triathlete, recovering attorney, motivational speaker and author of Triathlon for the Every Woman. You can download a free copy of the book here. Meredith is the host of the hit podcast The Same 24 Hours, a show which interviews interesting people who make the best of the 24 hours in each day. Meredith lives in Atlanta with her husband and two children, and writes about all things at SwimBikeMom.com.

Transition To Outdoor Runs With These 6 Tips

Why Does Treadmill Running Feel Harder Than Outside?