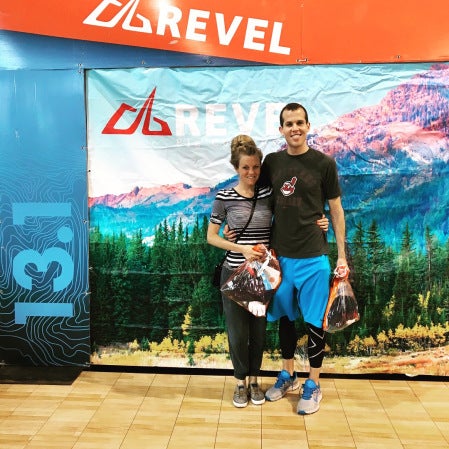 2017 has been a wildly successful “running year” for my husband Matt and me. Already this year, Matt had a half marathon PR, and I had a half and full marathon PR (which was also a BQ!). Feeling accomplished, we decided that the REVEL Big Cottonwood Half Marathon would be our last “big race” of the year. Going into this race, I had absolutely no goals or expectations. Matt, on the other hand, had his eyes set on another PR.

Related: A Story Of Tackling Pre-Wedding Jitters With Running A Marathon

Matt specifically chose this race because of its fast, downhill course. The day before the race, we decided to drive the course to help us solidify our race day strategies. As we ascended Big Cottonwood Canyon, I was completely mesmerized by the steep cliffs speckled with pine trees and the babbling streams cascading through the canyon. During our drive, we also discovered that the course was not entirely downhill. Right at mile 9, the course took an uphill turn, and then leveled off until mile 11. Luckily, after that, miles 12-13 were relatively downhill. However, this meant that we needed to strategically run the downhills to ensure that our quads could handle the uphill and flat portions of the race. So much for an easy, entirely downhill course!

Race morning started early with a 4 a.m. wake-up call. After a quick breakfast, we walked a mile to the race shuttle. We boarded a charter bus that drove us up the mountain to the start line. The temperature was in the high 40s at the top of the canyon, which was much cooler than we had anticipated. Thankfully, we brought sweatshirts, sweatpants and gloves to keep us warm pre-race.

The race itself was a bit of a blur for me. I flew through the first 8 miles, with my fastest mile clocking in at 6:12. Not surprisingly, by mile 9 my quads started hurting; I was fully feeling the effects of the downhill course! Normally, this would have caused me to become a bit defeated. But because the rest of my splits were in the 6:12 to 6:40 range, I knew that I could slow down a bit, and I would still PR. This kept me motivated for the last 3 miles, and I was elated as I crossed the finish line in 1:28:01.53 (with a three-minute PR!).

After crossing the finish line, I spotted Matt, and my excitement immediately dissipated. With one look, I could tell his race had not gone well. I listened sympathetically as he recounted that until mile 10, he was on point to PR (by at least two minutes!). However, during the uphill and flat portion of the race, he experienced excruciating pain in his quads, forcing him to repeatedly stop to stretch. It was hard for me to be excited about my own PR after hearing about his disappointing performance.

Throughout the years, I’ve found that this is one of the most challenging components of racing with a significant other. It’s incredibly rare for Matt and me to both have a great race on the same day. Because of that, I’ve learned how to deal with each phase of his “race disappointment,” all of which occur in the hour following a less than ideal race.

Phase 1: Anger and outrage–he is livid that all of his training didn’t pay off, so I listen attentively to his race and training recaps.

Phase 2: Solitude–he wants to cope with his less than ideal race solo, so I give him plenty of space.

Phase 3: Acceptance–he comes to terms with his race performance, so I tell him that he did an incredible job, despite what he thinks.

Phase 4: Renewed inspiration–he gets pumped for new chance to PR, so I encourage him to register for another race!

And Phase 4 is how the REVEL Big Cottonwood, which was supposed to be our last race of the year, turned into the inspiration for our next race: REVEL Mt. Lemmon in Tucson, Ariz. on Nov. 12!

40 Thoughts Every Runner Has When Chasing A PR

How To Help Your Friend Get Over A Bad Race