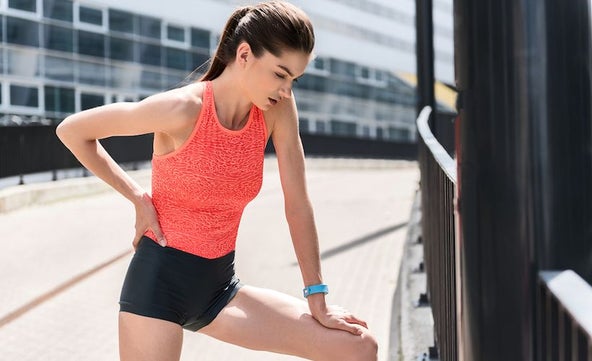 It’s hard to pinpoint where it all started, but in hindsight, this year has been a rough one. A planned February trip to Cuba to race a triathlon as part of a homecoming for my Cuban-born father went awry when I woke up on race morning with a severe case of vertigo. I had never experienced vertigo before, but since I could barely stand, I was forced into a DNS.

After a spring of mediocre training, I raced an early season Olympic distance triathlon, placed in the top-10 in my age group and walked away feeling disappointed, the only highlight being my kids running the finisher’s chute with me. The following week I resumed training toward my ultimate goal of competing at the USA Triathlon National Championships, feeling more like I had to swim, bike and run than wanting to. Not a good place to be.

Related: How To Deal With A Motivational Slump

It’s not terribly surprising that I decided to take my second DNS of the season for another Olympic distance race in July, favoring time with my family over a 4:30 a.m. wake-up and a 45-minute solo drive to the race. Again, I was not mentally in race mode and I chose to stay home, crying into my morning coffee because I had never struggled so hard in my 17 years of racing.

Ultimately, after a two-week vacation with my family and a lot of long walks with my dog and talks with my husband, I canceled our trip to Omaha, Neb., and took a third and final DNS for the USA Triathlon National Championship race.

What went wrong? A lot.

Memories Of A Mother

In March of this year I turned the age my mom was when she lived the final year of her life. My mother battled ovarian cancer for five long years, succumbing to the disease just weeks after her 42nd birthday and days before I turned 18. This year, I turned 42 and threw a huge “live like you were dying party,” promising to live this year as if it were my last and challenging friends and family members to do the same.

Apparently, I had no desire to race in what may have been my final year of life. My sister-in-law, who is also a psychologist, wrote to me, saying, “You have reached a finish line of sorts–outliving your own mother–and so now maybe you have nothing more to prove in terms of health.” Interesting.

In the past eight years, I gave birth to healthy twin boys, raced as part of Team USA in Spain in the Duathlon World Championship, ran two marathons, one resulting in an age group win and PR (3:28:00) at age 40 and qualified for the USA Triathlon Age Group National Championship twice.

I had been training so hard and for so long–enough was enough. I wanted a week (or a month) without a laid-out training plan with time goals. I wanted to run, swim and bike for the love of being out there, something I had not done in what seemed like a very long time.

The Wrong Goal At The Wrong Time

As a career road runner, I was used to hard training kicking in around the same time my kids went back to school and summer shenanigans were coming to a close. I was ready to mentally and physically focus much harder on my running goals for fall races, and my lifestyle allowed for it.

Triathlon racing peaks in the summer and the hard training kicks in right around the time everyone else is starting to relax and plan vacations. I had forced it for so many years, allowing my race goals to butt heads with family time. It was a constant struggle and I was too tired to fight it this year.

There Is A Huge “I” In “Triathlon”

Unlike road running where you have BRFs (best running friends) and can talk endlessly as the miles tick by, such isn’t the case with triathlon training. Have you ever tried to have a conversation on a bike? How about under water? I had a hard time finding training partners or others who were doing the same thing I was in terms of triathlon training. I didn’t have a good group to discuss struggles with or celebrate hard-earned victories. Triathlon can be a lonely place, but I think most triathletes like it that way.

There is no shame in taking a DNS. I owned my hard-earned DNS’ as I would a finish. My decisions not to race were so much harder than going to the race and just dialing it in.

By being honest with myself, I was allowed the time and space to figure out exactly why I was feeling so unmotivated and what I could do about it. Instead of trying to push through the races and continue training hard, I put on the brakes and took time to figure it all out. It was much harder to sit with my uncomfortable thoughts and sort out new feelings than it would have been to just go through the motions of racing at a mediocre level.

I gave myself a much-needed break and tried doing other activities for exercise. Over the summer, I did a lot of SUP (stand-up paddle boarding), yoga, Orangetheory classes, hiking and a variety of other activities which ultimately made me crave my swimming, biking and running workouts more.

My advice to anyone struggling the way I was would be to find your identity outside of running. For me, so much of who I am is tied to what I do and how I race. I desperately needed to step outside of that and experience and enjoy being me without the hard training.

Whatever you are struggling with, know that you are not alone and that injury is not the only reason to take a DNS. Mental struggles are just as real as physical injuries and, if you take the time to rehabilitate them as you would a strained muscle, you will either be back to running and racing or on to something else entirely. Either way, you are in control of making the decision to start or not start.

4 Motivators For When You Just Don’t Want To Run

LSD And 10 Other Running Acronyms To Know

11 Ways To Spoil Your Favorite Runner