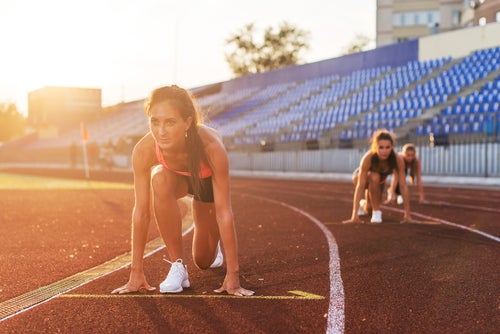 The Importance of Finding Focus

Some of the athletes we’ve coached have no trouble staying focused. They plan and execute as if it’s a military operation. However, some athletes just get bored and stop training. Others always seem to be surrounded by drama on race day (a mechanical problem, forgotten kit, lost license or something else), and their crisis somehow becomes your crisis. It can get to the point at which other ath­letes don’t want to share a ride or go to races with this person because they know there will inevitably be something that threatens to derail their own plans. For other athletes, there is a specific issue that they never seem to get right, like pacing or race nutrition. All of these things are mental mistakes caused by poor attentional control. Assuming you show up physically prepared, mental errors are the biggest cause of bad races, and they are self-inflicted.

Let’s clarify that when we use the terms concentration or focus we don’t actu­ally mean that. Psychologists prefer the term attention because it more accurately describes what’s going on in the brain. Attention is a much broader concept that refers to the brain’s job of selecting what is and isn’t relevant in any given situ­ation and allocating brain resources and processes accordingly. The subtle and important distinction being made here is that the brain’s challenge is not just to stay locked in on something (i.e., concentration or focus), but to sift, organize and select what to pay attention to, when and for how long and, critically, how to switch attention quickly and effortlessly while also stopping stuff that’s irrel­evant from grabbing your attention.

Consider how this plays out in competition. To avoid a drafting penalty, triathletes are required to:

That’s a lot to pay attention to!

The Brave Athlete devotes an entire chapter to improving attention, focus and concentration so you can keep your eyes on the prize in your daily training and during races. The chapter explores a simple mental model for concentration mojo, shows how stress affects how you attend to the task at hand and presents easy-to-learn techniques that reduce mental errors and silly mistakes when the heat is on. (The book covers a whole lot more, too. Take a look at the chapter previews.)

For this online preview from the book, let’s consider two of the ways you can avoid making attention mistakes.

For the first, we turn to Olympic swimming legend Michael Phelps.

Remember how he looked at the 2016 Olympics as his South African rival Chad le Clos shadowboxed just a few feet in front of him?

Here’s what we saw:

Aside from inspiring dozens of hilarious internet memes, what was Phelps doing with his #PhelpsFace?

Phelps was controlling his eyes and ears. The hoodie blocked his peripheral vision. His eyes were focused on something other than the other swimmer. His ears were getting rocked with his psych-up playlist. As he explained in later interviews, Phelps wasn’t angry at le Clos; he was in the zone and ignoring his rival.

The powerhouse of incoming sensory input is your eyes. Incoming visual information is the most reliable sensory modality you have because it is recorded directly onto the retina, and there are no distortions (or very few).

The secondary powerhouse is your ears.

Auditory inputs are good but less reliable than your eyes (for example, it’s sometimes hard to pinpoint where a sound is coming from).

Even if your Professor brain is in charge and you know that the butterflies and racing heart are a welcome sign that you are ready to race, controlling what you look at and what you hear helps keep your attention on the job at hand, helps keep you positive and confident, and stops the brain wandering off into a hole you know is dark and gloomy.

Only look at and listen to those things that keep you calm, confident and ready.

In the car on the way to the race, play tunes that make you feel energized and invincible. Create a music playlist that is at least 60 minutes long and that you can put on as soon as you arrive at the race site. Perhaps start with music that is grounding, calm and confident, and lead into songs that really get you into your optimal level of intensity. If you are already over-amped, you might need more soothing music; if you need to up the intensity, play music with a higher tempo.

Try to steer clear of crisis-prone friends and teammates because you will almost certainly get dragged into their calamity. Their lack of preparation should not become your emergency. See them at the expo or after the race. If you are one of those crisis-prone people, have backups of everything and be wary of asking other athletes to help out (ask volunteers or race staff, but try to give other athletes a break).

A second way to stop screwing up on race day is an external one: control your equipment.

Every cyclist or triathlete has some concern about a mechanical issue on race day, like a flat tire or a chain problem.

The likelihood of having a mechanical on a race day can be almost eliminated if you do one simple thing the week before the race. Have your bike checked over (including tire wear) by a mechanic the week of the race. Schedule this checkup at least two weeks in advance to avoid last-minute panic. (Perhaps even add a reminder to your calendar app!)

Never swim in brand-new goggles or a new wetsuit on race day—you don’t want to learn during the warm-up that your goggles leak or that your new wetsuit is too tight.

Print out a pre-race equipment checklist and tape it to your refrigerator.

My first cycling coach would not let us race with a dirty bike. He sent two of my teammates home the morning of a junior road race because they showed up with bikes that weren’t clean. At the time we couldn’t understand why he was so obsessed with this requirement. Sure, it developed pride and responsibility, but also, as we cleaned it, we had to pay close attention to things that were loose, close to failing, or not working as they should. It was a golden lesson.

Why Your Online Friends Can Make You Feel Like Crap

How To Productively Talk To An Injured Athlete