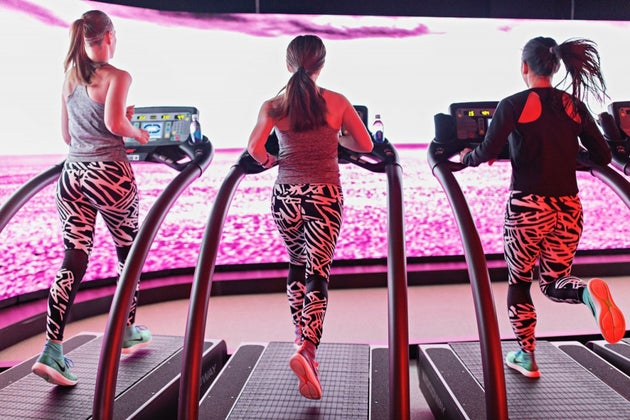 I’ll never forget the day I was forced to run on a treadmill for ten miles while training for the Boston Marathon during a particularly grueling winter in New York City. I signed up for a month-long pass at a gym in my neighborhood with the sole purpose using the treadmill to train.

Using the treadmill that winter was a necessity, but I didn’t enjoy it one bit! I dreaded schlepping to the gym to run on a hamster wheel for 90-minute sessions. If I had been training for any marathon other than Boston, I probably would have cancelled my entry; I despised treadmill running that much. However, after working so hard to qualify for the race, nothing—not even bad weather—was going to stop me from getting to the start line.

Fast forward three years and now I voluntarily sign-up for instructor-led treadmill classes, even when the roads aren’t covered in snow or ice. Kind of hard to believe I’m choosing the indoors over the open roads of Central Park, right? Even I’m having a hard time believing it, but it’s true.

I think you should also consider giving treadmill classes a try from time to time, here’s why:

Treadmill classes at a gym or at studios like Mile High Run Club in New York City are led by qualified coaches who give you words of encouragement and tidbits of wisdom throughout class. It can be an inexpensive way to get real-time advice from an expert.

Run With A Pack

Prevent boredom and stay on task while working off the energy of the other participants in class. You’ll be able to find your own rhythm without having to worry about keeping pace with anyone else like you do during outdoor group runs. Runners of all paces can do the workout together and feel inspired to push out of their respective comfort zones.

In the middle of February, it’s nice to run in a climate-controlled environment every now and then. Running indoors means not worrying about slipping on frozen sidewalks or having to wearing three layers of shirts just to keep warm.