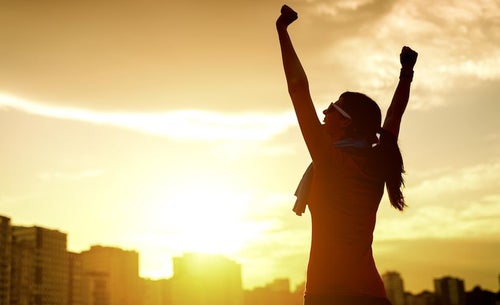 What is your goal?

I am not just talking about the small goal that you know you can accomplish, and which you thus tell everyone about. What is that thing, deep within you, that you want to go after but feel too nervous that you will never reach it? Yes, that goal. We each have one, regardless of if we ever let it see the light of day. And we let it secretly dictate everything we do within running.

My scary goal, deep within my soul, is to run a 5K in under 30 minutes. I have wanted to reach this goal for more than three years. But this goal has only seen the light of day for the last few months. Why did I keep it hidden for so long? Because I was afraid of falling short, time and time again, thinking that the more often I did, the further away it would be from becoming a reality. But once I started talking about this goal, the opposite began to happen.

I have a big support system behind me, and everyone involved has played a huge role in my attempt at making this goal a reality. From my brother who will run alongside me during races to keep me motivated to my coaches and physical therapists who continue to push me to gain strength and partake in speed training each week, these people, among many others, have helped me realize my perspective on this goal and encouraged me to keep chasing it.

I have said it before, and I will continue to say it: Your attitude has a huge role to play in helping you accomplish your goals. How you feel about them, how you talk about them and even how you execute them comes right down to your attitude. It’s like the old saying, If you think it, you will be it. If you think you can do something, be it run a mile without stopping, complete a 5K, finish a marathon, run a race in a certain amount of time, you will eventually do it. Running tends to be much more of a head game than we give it credit, thinking that most of the ability to do so comes from our bodies. But the reality is, if you do not think you will be able to do something, you will not do it because you have already decided in your mind before you even attempted the task.

My scary goal is to run a 5K in under 30 minutes. This last weekend at a local St. Patrick’s Day 5K, I made my first attempt of the year. Thanks to a few health problems over the last few weeks, I knew that this race would not be the race during which I would reach this goal. But I decided that, regardless of being able to reach this time goal or not, I still needed to give my best effort to the race. One 5K later, my time sat at 30:55. I gave my best effort and walked away with a personal best.

I know that I am able to accomplish my big goal, and that my next attempt will be the one in which I blow it out of the water. My efforts in training and mental preparation are paying off–right along with sharing the reality that this is a scary goal for me. Regardless of the potential to fall short of this goal, I know that it is within reach. I have gone from a 50-minute 5K to 30:55 in three years. Just last June, I set a new 5K record of 32:24, so being able to say now that I have knocked down my time by another 90 seconds in nine months is huge. Chasing big goals is not meant to be a quick process; if it was, we would never care to talk about them. It is in chasing what truly frightens us that we find out just how strong we are.

Never Discount The Power Of Your Journey As A Runner

A Runner’s Argument In Favor Of The Off-Season