Thinking about running a marathon this fall, but don’t know where to start? Well, you’ve come to the right place. Whether you’re daunted by the idea of running 26.2 miles, or you’re looking to improve from your last go around, we have a fresh marathon training plan that will get you to the start line healthy—and the finish line, happy.

“This plan has all the structure in place so that a new marathoner will feel empowered to trust herself and learn to listen to her body,” says Melanie Kann, New York Road Runners coach. “For runners who already have one or two 26.2-milers under their belt, the speed work built will help them beat their prior times while still allowing plenty of recovery, preventing injury.”

You’ll find a number of subtle but important details that make this training program a success no matter where you’re starting from. For starters, twice a week strength training—in just the right dose: just 15 minutes of basic bodyweight moves (think: planks to strengthen your core and glute bridges to fire up your posterior chain—glutes, hamstrings—which gets “turned off” from sitting all day). “It sounds like so little, but if you ask most runners, they’ll typically go for an extra mile before doing some strength work,” Kann says. Trading that running time to strengthen your muscles and joints has long-term health benefits and research shows it can even improve your running performance.

Another important difference: While many traditional plans include long runs that slowly tick up by one mile each week—culminating at 20 miles—ours alternates an increasingly long run with one that stays steady at 10 miles. That “step-back week” gives your body extra time to recover and adapt to the stress running longer, while still providing enough stimuli to keep building your overall endurance and fitness, Kann says.

And while it does peak with a 20-miler, that’s not a firm benchmark. “There’s absolutely no magic to the number 20,”  Kann says. “We would rather a runner call it a day at 18 miles while their form is still good versus potentially hurting themselves just to get to that 20 mile mark.” That’s why Kann gives the option of running for 3.5 hours rather than distance—it’s logging that time on your feet that’s key.

Something that might feel new if you’ve followed other training plans in the past: Running a few easy miles the day after your longest run of the week is encouraged. “If you’re a little sore, but nothing alarming or out of the norm (think: 3 or 4 out of 10) it can be beneficial to move the body a bit in order to loosen it up,” says Kann. That being said, if you’re injury-prone or particularly stiff (think: sore enough that alters your running gait), then it’s best to rest completely or do active recovery (more on this below).

Convinced? Here’s how to get started.

YOUR MARATHON TRAINING GUIDE
Use this key to get to know all the different types of workouts:

FLEX: Wake up and ask yourself: “Does my body need to run today?” If you feel like you want to get the blood flowing, go out for an easy two or three miles. If you have to think about it at all, don’t do it. Instead, ask yourself: “Do I need to move more than I absolutely have to?” If yes, consider yoga, cycling, swimming, or a 20-minute walk.

ST: 15 minutes of bodyweight strength-training, including moves like planks, lunges, squats, and glute bridges (do 10-12 reps of each move in a circuit fashion, repeating 3 to 4 times total)

TEMPO: Keep your effort level at a seven out of 10 (think: comfortably hard or conversational—you can talk but you really don’t want to because you’re focusing on maintaining your effort).

INTERVALS: Warm up with a mile run at an easy pace. For marathon training purposes, keep intervals at an eight out of 10 (you should feel out of breath, like you could say one or two words). You can vary the work-to-rest ratio but you can start with one-minute work periods to one-minute rests. Cool down with one mile at an easy pace.

HILLS: Start with an easy one-mile warm-up, then find a roughly 400-meter hill (that’s 0.25 miles) and alternate running hard up the hill (effort level eight)and jogging easily back down to recover. You an also opt to simply run a hillier route, focusing on staying at a consistent effort level of seven the entire time. Continue until you’ve covered all but one mile of the prescribed . mileage. Then, finish with a one-mile cool down.

REG: Keep your effort level to five or six out of 10. You should be able to chat intermittently with a training partner.

AYF: This stands for “as you feel” and could range from an “easy” pace of a three to four up to a “regular run” pace of a five or six out of 10. Don’t push harder than that so you’re fresh ahead of the next day’s long run.

LONG: The effort level should also be around a four to a five—very conversational.

Download the PDF version of the 16-week training plan >> 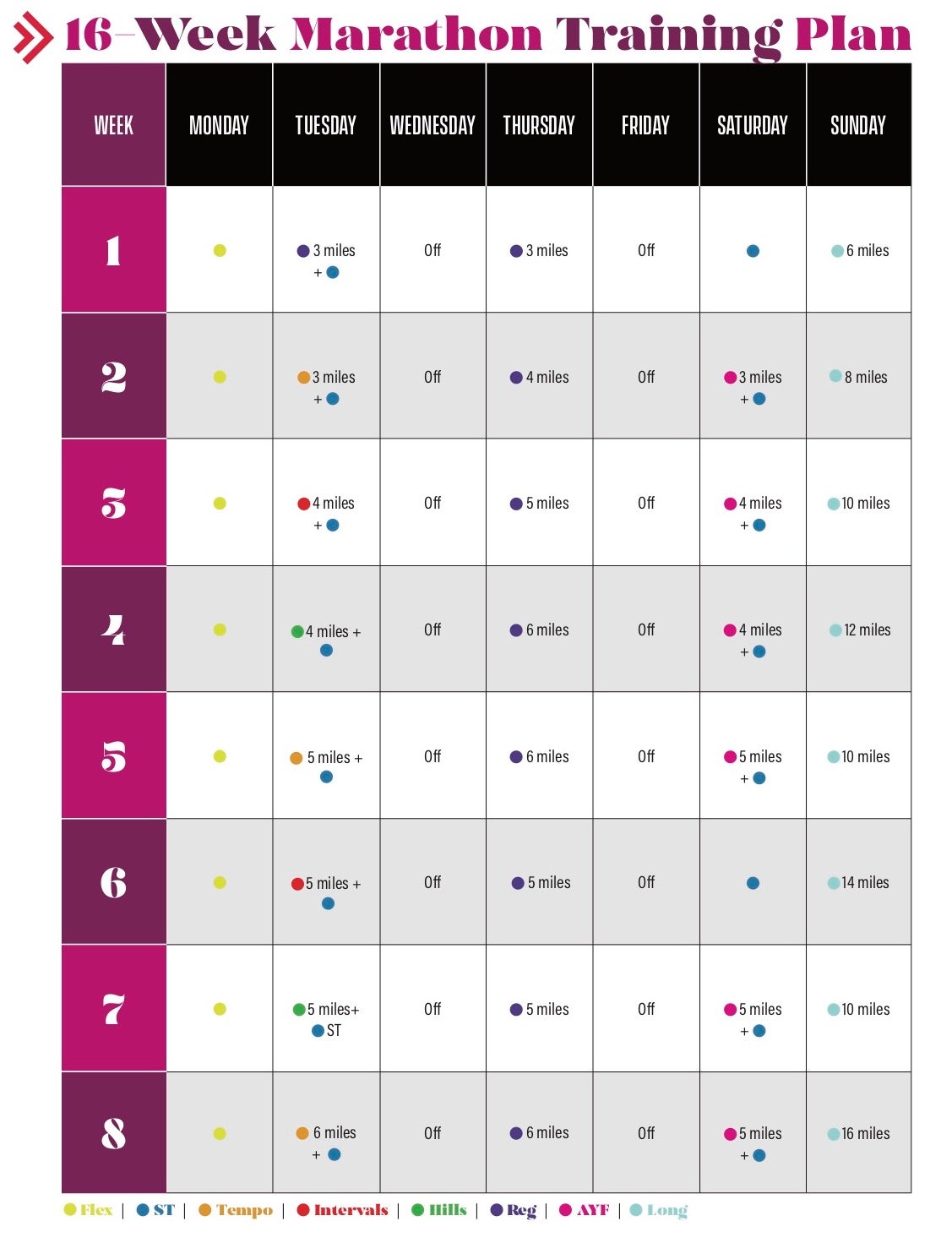 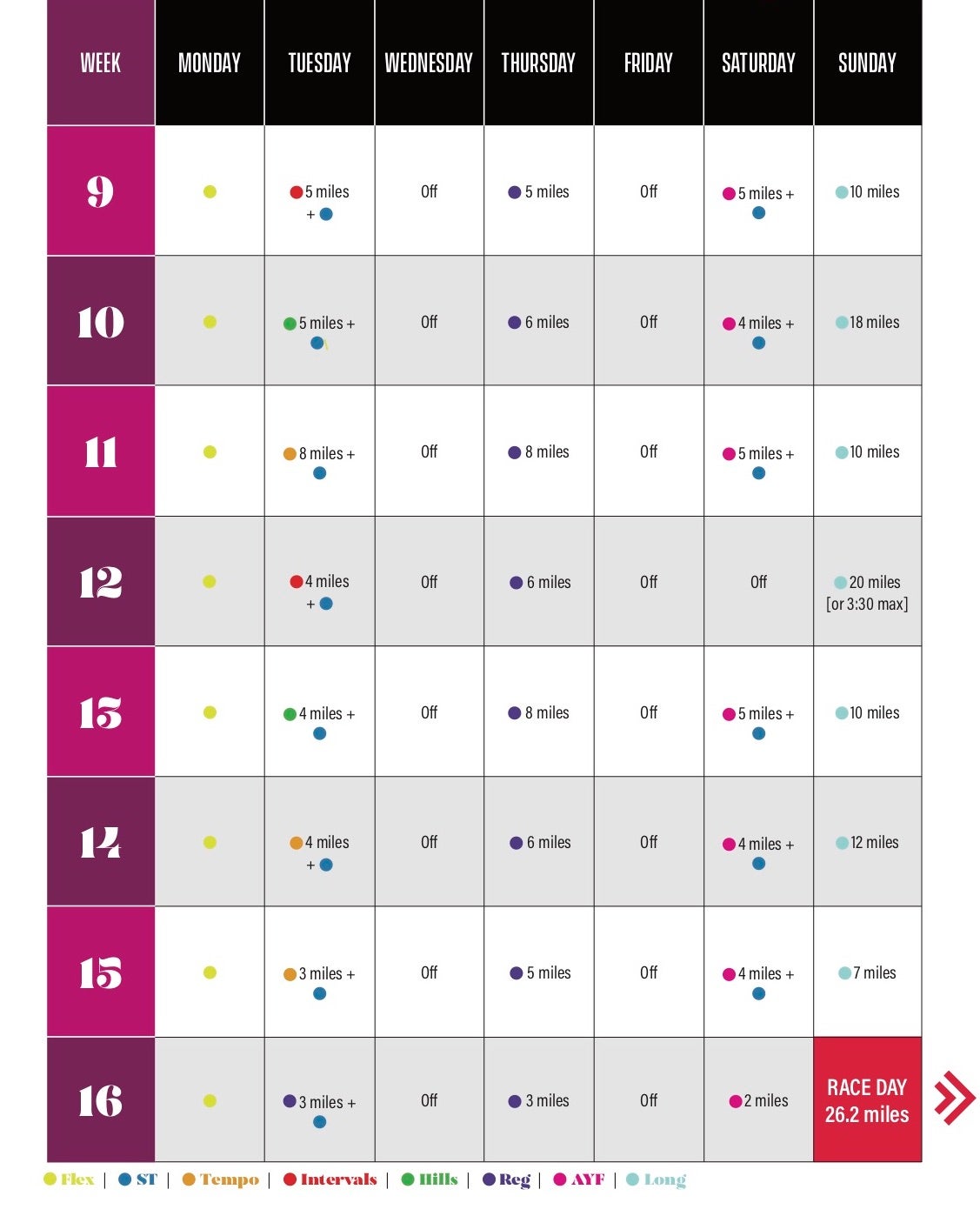 Weekly Tempo Runs Will Build Your Capacity at Marathon Pace

Can Training For A Marathon Make Half Marathons Easier?

Consult This Flowchart To Find Your Marathon Training Starting Point

The Importance of Running Your Own Race, and a Case Study on How To Do It